Baldur’s Gate: Enhanced Edition Pulled From Sale While Publishers And Developers Duke It Out

Well, guess we'll have to wait and see where the pieces fall in the end. 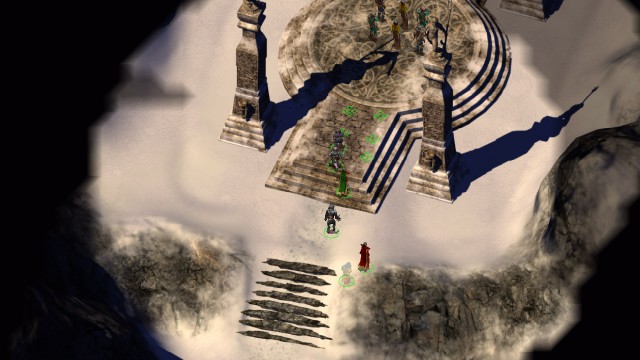 The Enhanced Edition of the classic RPG Baldur’s Gate has been removed from digital shelves at the Apple App Store and on the website of its developer, Beamdog. According to Beamdog’s president Trent Oster, the game has been taken down “at our publishing partner’s request as we attempt to resolve a number of contractual issues,” the details of which they are legally prohibited from discussing. The legal dispute will prevent the release of the Android version, which has been expected for months, and a major patch for the game, and will send the Enhanced Edition of Baldur’s Gate II plummeting into development hell. Excuse me, development Baator.

The Enhanced Edition, a remake of the 1998 Dungeons & Dragons-based roleplaying game that began BioWare‘s reign as a roleplaying powerhouse, has been out on PC, Mac, and iOS for months, so this news comes as something of a shock. Apparently, Beamdog’s legal woes stem from a dispute with its publisher, Atari, though the details are sketchy at best. According to Oster, the company is “unable to discuss details of the complex legal matters surrounding this issue at this time.”

While it was removed from Beamdog’s website and the Apple App Store, Windows downloads of the game are still available on Steam and Amazon as of this morning. According to Beamdog’s FAQ, players who have already purchased the game from will still be able to download it regardless. But this legal conflict also puts a damper on work on everything from follow-up games to major patches that, by all accounts, are already well underway or even ready for release.

The game’s upcoming patch was reportedly set to make improvements to the user interface and renderer, full German language support, and 135 gameplay fixes and enhancements. The Android version of the game, meanwhile, has been delayed by technical problems for months, and this news comes as another blow to fans who have been hoping to play on Android tablets, turning their already long wait indefinite.

Worst of all, this contractual dispute sets back the development of the Enhanced Edition of Baldur’s Gate II, which Beamdog has been working on for a while, but can’t officially announce or put up for sale. And it makes those occasional rumors of a Baldur’s Gate III seem like even more distant and impossible dreams. Let’s hope the developer and publisher will work this out in short order so they can both shut up and take all of our money.