Star Wars Shines in the Pilot of The Bad Batch 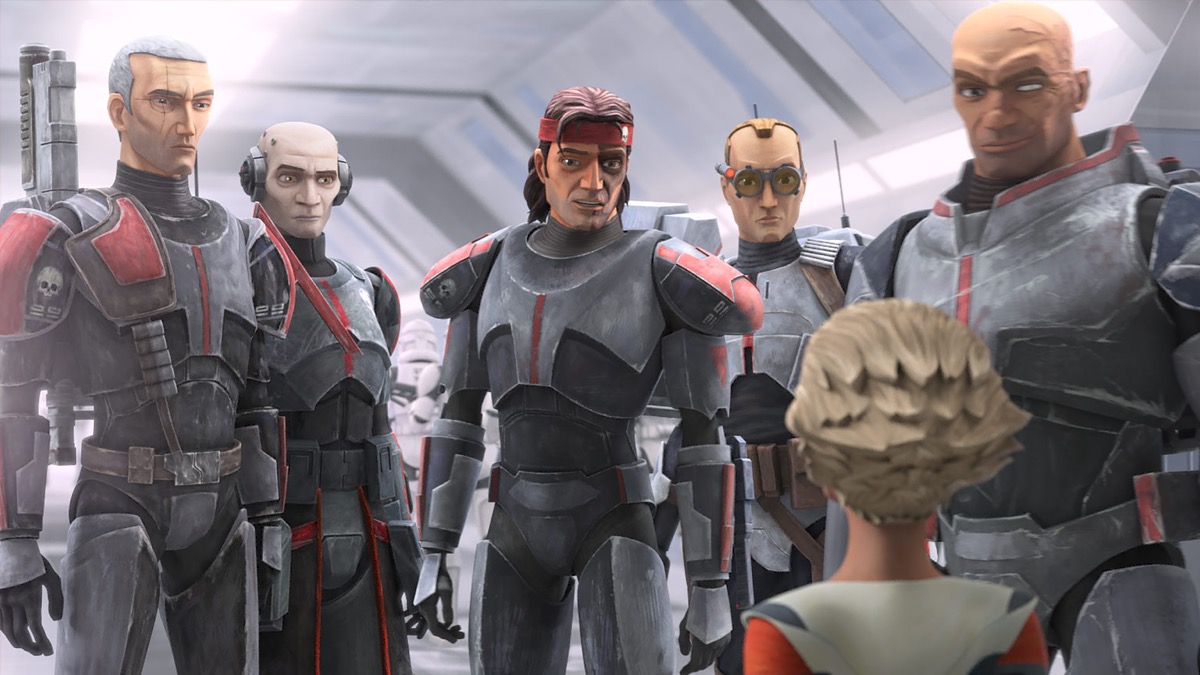 So here’s the thing: Star Wars: The Bad Batch rules. Multiple times while watching the pilot episode titled “Aftermath,” I felt myself just acting like a kid again. It’s so Star Wars in the best possible way, and I can’t wait to see where the series takes us. (I purposely only watched “Aftermath” so far as to not put spoilers past the pilot in this piece.)

So strap in and get ready to meet Hunter, Echo, Wrecker, Tech, Crosshair, and Omega.

Star Wars has this trend of grumpy men finding kids that need their help and doing it despite everything telling them to forget about it. It’s been there since Han Solo decided to help Luke Skywalker and Obi-Wan Kenobi (the kid in that scenario being 19-year-old Luke Skywalker), and it has extended throughout the galaxy into my personal favorite father/son relationship: Din and Grogu on The Mandalorian.

It’s a time-honored tradition for the men of Star Wars, and I am happy to report that The Bad Batch continues to follow that trend in the best possible way: Omega and her four dads. I didn’t know what to expect out of The Bad Batch, and I figured it’d be a show I watched to understand more of the lore for creator Dave Filoni’s work. Instead, I’m completely captivated by the story of these “defunct” clones that are more independent and have different abilities than the rest of the troopers.

I love that Hunter, Wrecker, Crosshair, Tech, and Echo are the outcasts, and I love that they instantly question the Empire (with the exception of Crosshair, but we’ll get to him). So, let’s go through what makes each of the clones tick and how they all fall in love with a young girl named Omega who asks them for help. 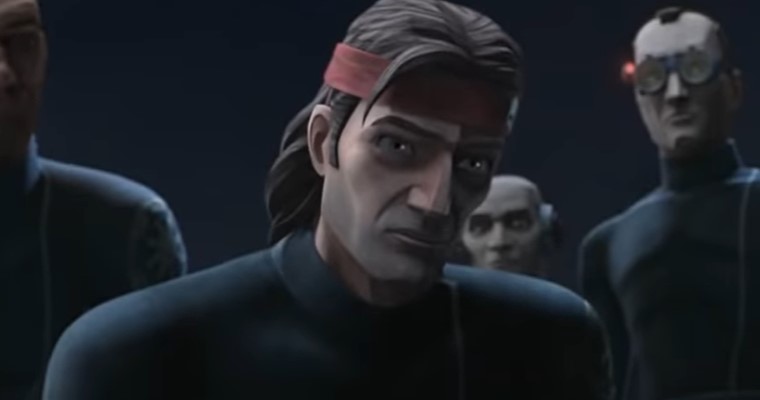 No, I do not find this Rambo-looking clone hot. I’m telling that to myself. Because I, in fact, do. But Hunter is the de facto leader of the Bad Batch, something I personally think that Crosshair doesn’t particularly love but Hunter, so far, is a good leader. He makes decisions that feel right to him that might not always be what his orders stipulate, and he tries to do the best thing by the Bad Batch. And he also clearly cares about the well-being of Omega, so he’s instantly a fave of mine.

Then, we have Tech. 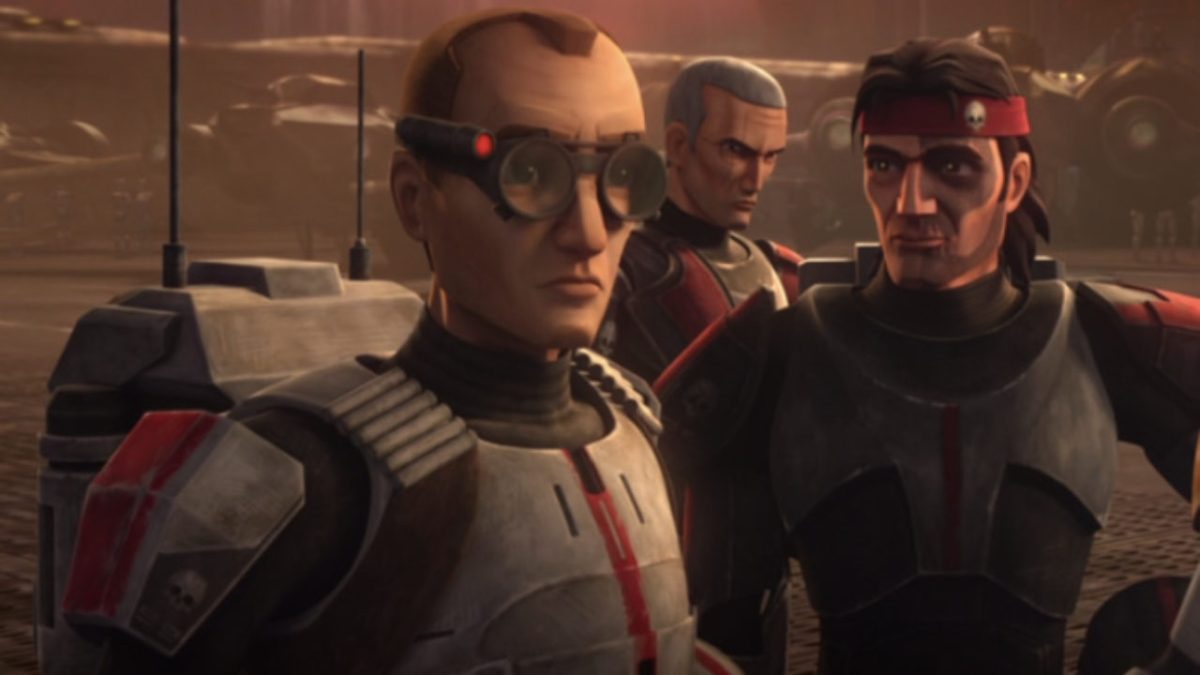 Tech is super smart. Like, that’s his entire deal. Need a problem fixed? Go to Tech. He’s fun, he clearly only cares about tech and that’s fine, and I can’t wait to see how he’ll change throughout the show now that Omega is with them.

Up next is Echo! 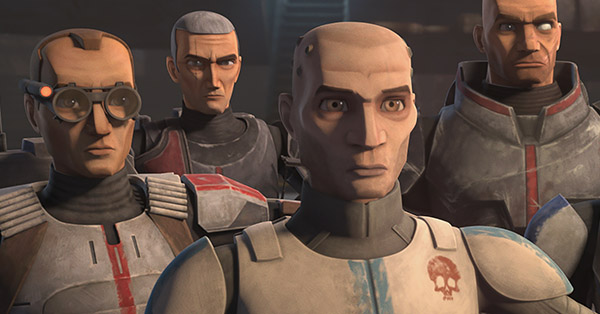 Echo truly just needs someone to hug him. We don’t know much about Echo after the first episode, but the entire time, he just seems very subdued and maybe sad, and I want to make sure that Echo is happy and that’s all.

Where Echo is sad, Wrecker is just always happy and ready for a fight! 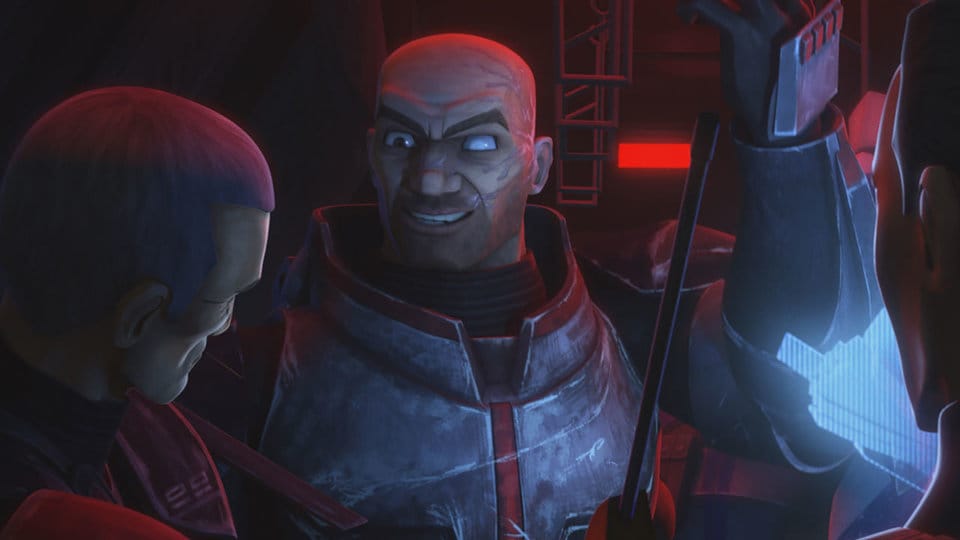 Wrecker is the kind of gentle soul that would brutally hurt someone and then turn around and have a tea party with some kids. He’s not my Din Djarin kind of strong boy, but he’s more like Chewie (the other love of my life). You know he can destroy you, but then he’d give the best hugs so you kind of love and respect him.

What I loved about Wrecker in “Aftermath” is his dedication to his stuffed animal. Honestly, a mood.

Next, we have Crosshair.

Okay look, I know I’m going to end up loving Crosshair but right now … we’re not on good terms. Crosshair seems like the guy who thinks he knows the most and is mad he’s not in charge. He’s also the one most wired to following orders like the other clones, and it ends up getting him taken in to be “fixed.” But what we see by the end of the episode is Crosshair (who is an excellent marksman) clearly still caring for the Bad Batch and letting them get away with Omega when the Empire takes over and tries to get rid of the Batch.

And then, there’s my baby girl.

I would die for Omega. She’s a member of the Bad Batch but in the way of them feeling like they need to care for her (even though she’s technically more suited to take care of them). She reaches out to Hunter about the mission the Bad Batch is going on for the Empire and warns him (and he meets Saw Gerrera and realizes what’s happening with the Empire), and so suddenly, Hunter knows he has to protect Omega and get her to safety.

That family vibe that now exists with Omega and her four fathers (Crosshair is not fully there yet) is beautiful, and I can’t wait to see it explored fully in the future of Star Wars: The Bad Batch.

Now that this family has found each other and has a mission to fight the Empire (and probably try to save Crosshair), I’m excited to see where the show goes. and I cannot wait to meet a younger Fennec Shand! This show rules, and I don’t say that lightly!