An Empassioned Fan’s Plea: Make Fifteen Jaws Movies to Maintain Back to the Future‘s Accuracy 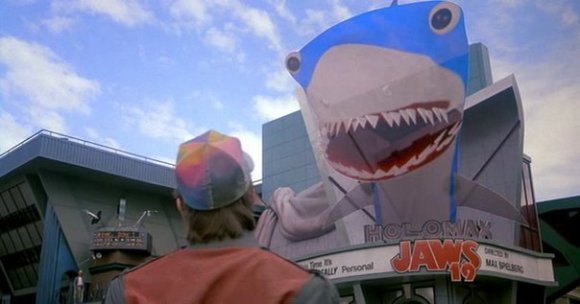 In case you don’t remember, Back to the Future II contains a memorable scene where a dazzled Marty McFly, visiting the year 2015, is overwhelmed by a holographic advertisement for Jaws XIX, the 18th sequel to Steven Spielberg‘s Jaws. But, as Tumblrer Ctrayn points out, there are only four Jaws movies, which means movie studios have only six hundred and thirty two days to keep Back to the Future II from having a singular glaring continuity error.

What? I’m sure the rest of the movie will turn out to be entirely accurate.

Obviously, it’s time to take things into our own hands, and if you’d like to join the mission of producing fifteen feature length Jaws “sequels,” you should check this post on Tumblr, where folks have already shown enthusiasm for the project to the tune of more than 22 thousand notes. And, as Ctrayn says, “Even if your film is 40 straight minutes of a rubber shark floating quietly in a bathtub… it is still probably a more entertaining watch than Jaws: the Revenge.”