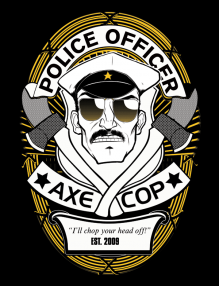 In surprising news of the day, Variety is reporting that Fox has purchased the rights to produce an animated version of the off-beat online comic Axe Cop. Starting with a batch of 15 minute shorts, the cartoons are envisioned by Adult Swim veteran and current Fox employee Nick Weidenfeld to head up a new “Animation Domination HD” primetime block. This could be great, guys.

For those of you who have somehow missed out on one of the better things ever brought to the Internet, Axe Cop is a web comic published for free online. While its business model might not be interesting, the genius is the methodology behind the strip’s production. The strip is drawn by Ethan Nicolle, and written by his brother Malachai Nicolle — at the strip’s inception in 2009, Ethan was 29 and Malachi was 5.

The mismatched age of the creators is the real magic behind the series, and one wonders how the creators of the forthcoming show will be able to capture it. The imitation of a child’s mind probably won’t compare to the raw, wild output of a kid. However, their source material is strong, and perhaps the Adult Swim pedigree will help those behind the new series.

It’s worth noting that years and years ago, networks went after off-beat comics in a fruitless effort to produce primetime cartoons. Hopefully, this project won’t be another Fish Police. However, with successful anarchic shows like Adventure Time and others, this might be the perfect time for the madness that is Axe Cop to grace our television screens.