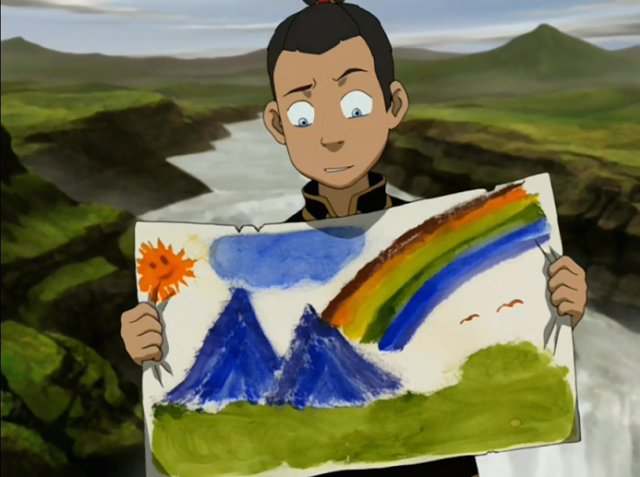 After last weeks’ (in TV time—two weeks ago in me-time) Katara-centric “The Painted Lady,” this week we get something we haven’t gotten in a while: A SOKKASODE!

One of the meteors crashes to earth, starting a fire and threatening a nearby town and all the dinosaurs. What would the dinosaurs have been in the ATLA-verse. Aardvark dinos? Pomeranian dinos?

Aang, Katara, and Toph leap into action, leaving the non-bender Sokka to sit around being sad at his lack of superpowers. Is this the Zeppo episode? It’s the Zeppo episode. (Side note: Buffy had like three Zeppo episodes, because it seemed like once a fucking season Xander had to have a crisis about him not being good enough, only to regain his confidence by the end of the episode and lose it again in time for the next bout ofwaaaaaah waaaaaaaahs. Sorry, I just really hate Xander, and the fact that Sokka, whom I love, is the Xander of the show is throwing me off a little. Just don’t try to blame someone for their boyfriend treating them like shit and we’ll be good, yeah?)

Sokka’s friends try to cheer him up by pointing out his awesome map-reading and bad joke-making skills, but none of it makes him feel any better. In a stand-up-and-cheer-for-Katara moment, instead of trying to invalidate his feelings (“I don’t get why you’re feeling that way!”), she says that she’s sorry he feels bad and that, for what it’s worth, no one else sees him as useless. To make him feel better: shopping! Specifically: weapons shopping.

Some important stuff happened in this scene: Sokka sees a sword he likes, the world’s worst shopkeeper (sure, just let the teenagers play with the deadly weapons in your store, it’ll be fine) tells the group about a local sword master, and Aang convinces Sokka that he should see the master to hone his swordfighting skills, thereby making him feel less incompetent.

None of that has anything on Aang trying on a skeleton suit: 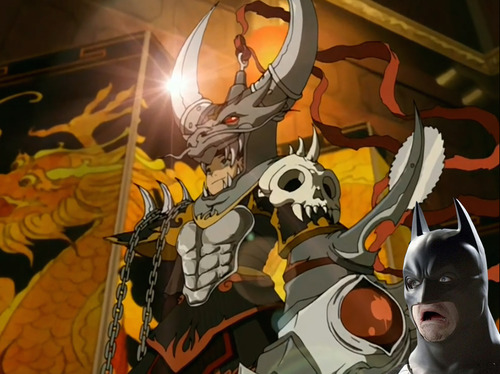 There are nips on that thing.

At first I thought “Hey, spending a lot of time with the Fire Nation’s best swordsman might not be the best idea when you’re fugitives trying to keep up the—not entirely convincing, frankly—ruse that you’re from the Fire Nation colonies. Plus, aren’t you on a tight schedule?” But then Master Piandao teaching Sokka how to be a swordfighter took, like, a day and a half. Hey, we still have 16 episodes to go until the finale. Everyone is allowed their detours. I can’t wait for the group to take a breather so Momo can enroll at the local community college.

The master’s training regimen includes landscape painting, rock gardening, and calligraphy in addition to swordfighting, and Sokka impresses less with his physical skill than his smarts and, erm, creativity: 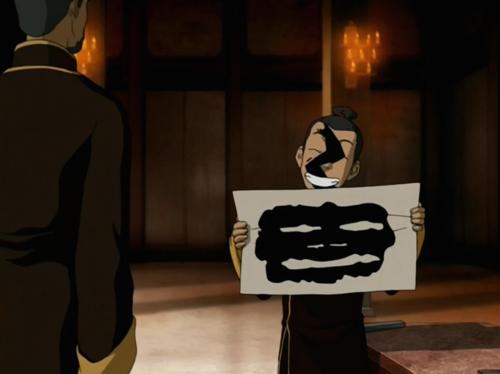 Meanwhile, Katara, Aang, and Toph are bored out of their skulls without Sokka there to be sarcastic at them. I like to think that’s what would happen among my friends if I ever got really into swordfighting. Shhh, let me dream. [Editor’s note: I can confirm that the current TMS staff is so full of skull boredom without Rebecca to be sarcastic at us. -Victoria]

After a day of training (Piandao, are you sure you’re not just some random dude who wandered off the street and is pretending to be a master swordsman? Is there some grift going on here? Do you sell “master swordsman” certificates out of your trunk?), Sokka’s good enough that the next day he’ll be able to make his own sword. And, because he is my patronus, he decides “My sword’s going to be a MOTHER FUCKING METEORITE.”

Piandao lays on the charm, saying Sokka is the bomb-dot-com, which makes Sokka guilty enough that he confesses to being from the Water Tribe. Piandao’s response: “Duh, I know! Just like I know the little one is the Avatar, you dipshit. You were not subtle! You didn’t give me a fake name! Also, IDGAF about political bullshit—I just want to teach people about swords. SWOOOOOOOORDS!” But before that, they fight, because Piandao enjoys emotionally manipulating teenagers or something. Anyway. The fight—which Sokka does pretty well in despite, again, having like 48 hours of official training (this episode is so unrealistic, but I don’t care, it’s cute)—is actually Sokka’s last training session. Afterwards Piandao says if he continues practicing, he could be the very best, like no one ever was. Then he gives him a White Lotus Pai Sho tile, the symbol of the secret organization that we found out Iroh belongs to last season.

It’s been maybe a week or so since I watched this episode, and there’s still something I can’t get my head around. I am absolutely behind Iroh pretending to be a crazy old man so that the guards won’t suspect him of planning something. I’m 100% there on him keeping it funky fresh by working out while the guards are away, though I wish they’d have gone full-on “Eye of the Tiger” montage. Eh, that’s what fandom is for. I am absolutely on-board for this “You’re about to get messed with, son!” look he shoots one of the guards. 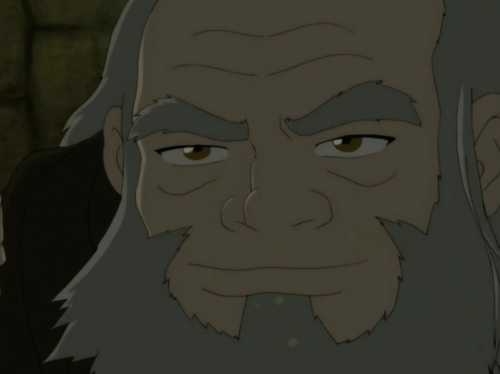 I am, however, vaguely uncomfortable with this: 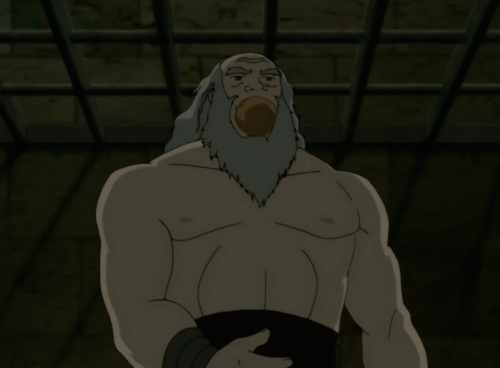