Past Me: “Hey, Future Me, a friend of mine has been talking about Avatar: The Last Airbender, but I don’t know whether I’ll like it. Is it any good?

Me: “Wellllll, Past Me, there’s an episode where a psychopathic teenage girl who shoots lighting from her fingers takes a beach vacation, gets really competitive at volleyball, and tries to awkwardly hit on a guy by calling his outfit so sharp it ‘could puncture the hull of an Empire-class Fire Nation battleship, leaving thousands to drown at sea.’”

MERRY CHRISTMAS TO ME.

Fire Lord Asshole, wanting to do important political shit without his kids around, sends Azula, Zuko, Ty Lee, and Mai away for a siesta at Emerald Island, which is where the most fucked up family in all of the ATLAverse used to take their summer vacations. Zuko’s broody and insecure about it. Shocker. I want Ozai’s Angels to have a drinking game that hinges on Zuko responding to innocuous statements with moody emo teenage shit. 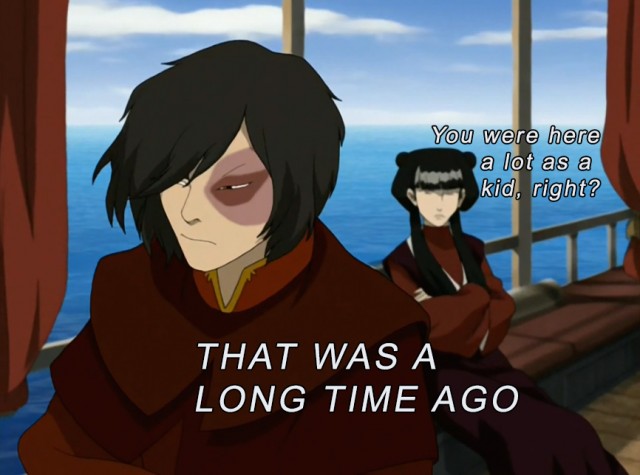 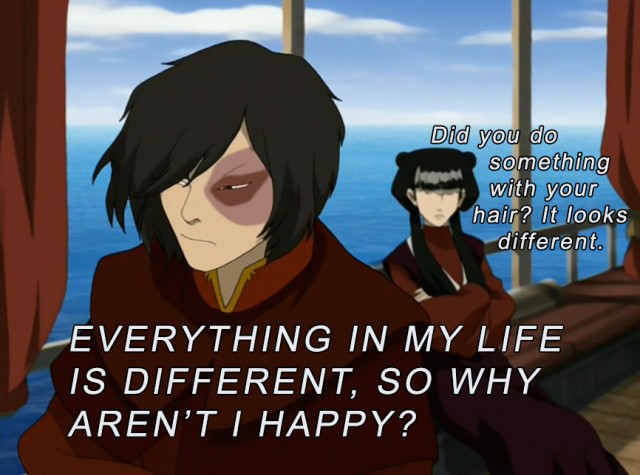 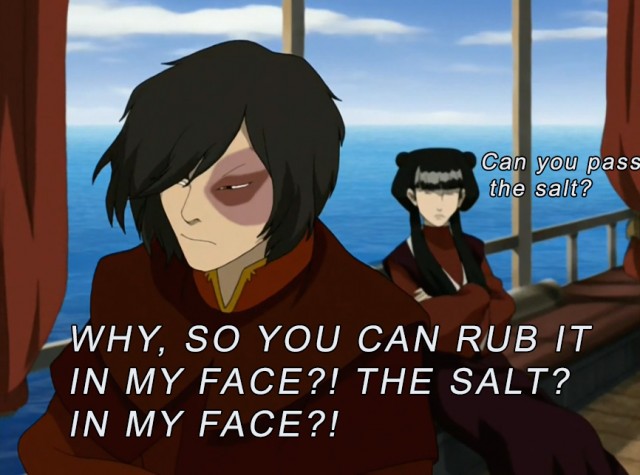 Cue Mai looking into the camera like she’s on The Office before taking a shot.

Instead of staying in their old summer home, the group’s crashing at a tiny cottage belonging to the Stepford Old Lady Twins, who proceed to talk about how the island can help people get in touch with their true selves. Azula, thoroughly unimpressed, just yawns. The Stepford Old Lady Twins strip down to their bathing suits, and Mai covers Zuko’s eyes like he’s five so he won’t be exposed to saggy old lady boobs. 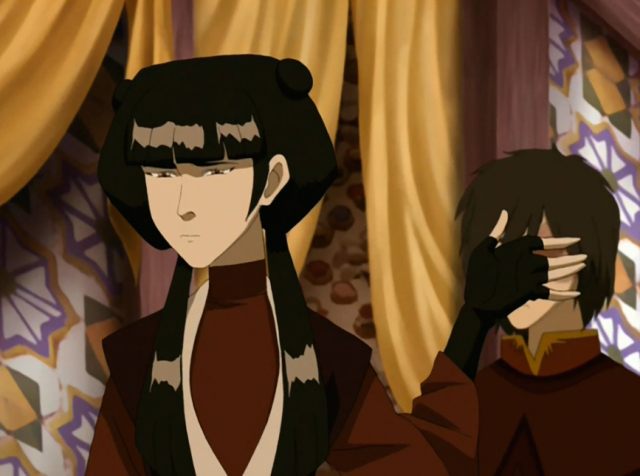 This is when I knew I loved this episode.

When they hit the beach, the group does about what you’d expect them to: Ty Lee is bubbly and cute and instantly attracts a male fan club, Azula steps on some kid’s sandcastle, Mai is grumpy and judgmental, and Zuko tries to do something (in this case, getting Mai ice cream) and fails miserably. Then Azula, seeing some ass she can kick, drafts her friend into a volleyball game, which Zuko prepares for by dramatically throwing his robe off while birds fly past in the background.

I had to gif it just so I can remind myself when I’m old and grey this was not, in fact, a hallucination brought about by sleeplessness and residual exposure to the bleach I used to clean my bathroom yesterday.

Throughout this entire episode, Azula, curious as to how people will treat her if they don’t know she’s royalty and at a loss for the whole “relaxation” concept, sets a task for herself: She will be a normal person doing normal person things. Fortunately for my heart and soul, she’s still Azula, and that means extreme violence. When she, Zuko, Mai, and Ty Lee handily defeat their volleyball rivals (is this fanfic?), she tells their foes that “WE DEFEATED YOU FOR ALL TIME! YOU WILL NEVER RISE FROM THE ASHES OF YOUR SHAME AND HUMILIATION!”

Two beach bum admirers of Ty Lee, Chan and Ruon-Jian (pronounced “Ron Jon,” as in Ron Jon Surf Shops–I see what you did there), invite her to a party, and they agree to let her decidedly more antisocial friends come along if they promise to behave themselves, because “some of the most important teenagers in the Fire Nation will be there.” Kick these frat bros’ asses, Azula.

Azula, taking “we’re going to party from dusk till dawn” literally, shows up with her ducklings at tow just as the sun’s going down, because punctuality is the best quality a party guest can have.  Wait… it’s not? She later tries her hand at flirting by invoking ships and murder–see the aforementioned “sharp” line–while Zuko’s over in the corner being an insecure asshole about other dudes liking Mai. Zuko. Do not go down this path. Ty Lee is being an all-star MVP–asked which of her male admirers she’s into, she responds “Well I don’t fucking know!” and beats ‘em up so they’ll leave her alone. She is an ICON.

An icon whom Azula makes cry when she basically does the PG kid’s show version of slut shaming her–“They only like you because you’re a tease who flirts with them. None of them know who you really are!” Then she admits to being a bit jealous, to which Ty Lee reacts with utter confusion, because Azula is “the most beautiful, smartest, perfect girl in the world!” And Azula’s all “Yeah, well I know, but men are all scared that I’ll do something horribly violent to them.” Ty Lee giggles and says “Well, they’re not wrong!” This may be my favorite female relationship I have ever seen on any sort of screen.

Ty Lee gives Azula flirting advice (“Just laugh at everything they say.” “That sounds shallow and stupid--let’s do it!“), and after using some girl’s head as a table, Azula proceeds to charm Chan by talking about how ~~~~strong~~~~ he is. How long do we think it’d take Azula to beat him up, theoretically? Five seconds? Or no seconds at all, because she gets a little intense and scary (“You and I will be the strongest couple in the entire world. We will dominate the Earth!”) and scares him off, leaving her a mix of frustrated and insecure. 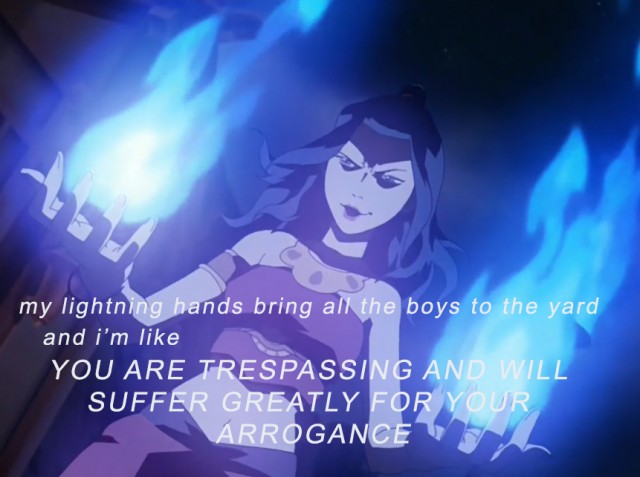 Back inside the party, Zuko’s being a possessive asshole, which leads to Mai calling him out on being angry all the time and Zuko responding that she has no emotions at all. They break up, and Zuko gets tossed out of the party, after which he says “WELL I WAS LEAVING ANYWAY!” like the teenage Dorkus Dingus McGee he is.

Being Zuko, he broods alone on the beach at night, being sad and reminiscing about happier times. He breaks into his family’s house so he can be even more sad and is then approached by a similarly ejected Azula, with Ty Lee and Mai trailing behind. At a bonfire of some of the beach house stuff, Emerald Island’s whole “you will know yourself” thing comes into play, as the four of them finally air some of their baggage. It’s an intense scene. Insults are thrown around (Ty Lee is a “circus freak,” Mai is “dull and boring,” Zuko is “high strung and crazy”), except at Azula, because no one dares. She’s loving this too much. It comes out that Zuko’s angry at himself (yeah, because you fucked up), Ty Lee craves attention because she had a ton of siblings and was ignored when she was a child, and Mai has controlling parents who squashed her emotions by raising their daughter to never step out of line. And Azula (emphasis mine)…

“I could sit here and complain that our mom liked Zuko more than me, but I don’t really care. My own mother thought I was a monster.She was right, of course, but it still hurt.”

Well. That adds an unexpected level of pain to Azula trying to be normal, doesn’t it? She knows she’s fucked up. ASHUOIAJCOIJAOIWJALCJI.

Emotional catharsis completed (and Zuko and Mai back together), the group decides “fuck this normality shit” and goes back to Chan’s dad place to bust all the rich furnishings up. I know I’ve been anticipating Zuko joining the gaang, but I kind of don’t want this group to break up yet, either. This episode is everything I ever wanted. 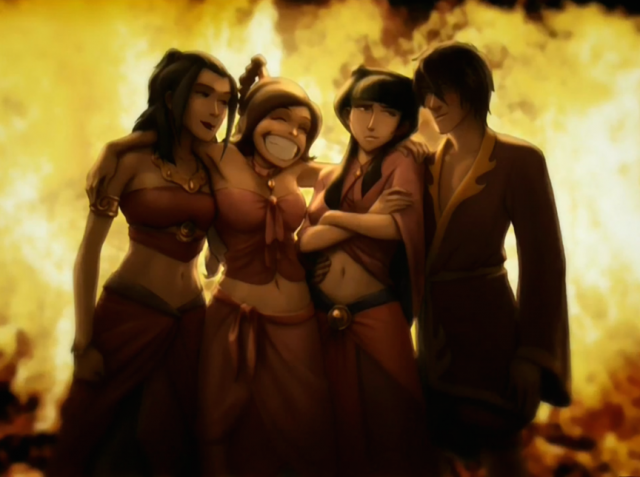 BUT WAIT! THERE’S MORE! The gaang was in this episode, too, though you can forgive me for losing it in the shuffle, what with Azula being more amazing than usual. Tl;dr, Aang goes down a waterslide and accidentally gets discovered by Fire Nation guards, but their messenger hawk is intercepted by the assassin Zuko hired, who proceeds to attack Aang and friends BY BLOWING THINGS UP WITH LASERS HE SHOOTS OUT OF HIS FOREHEAD. 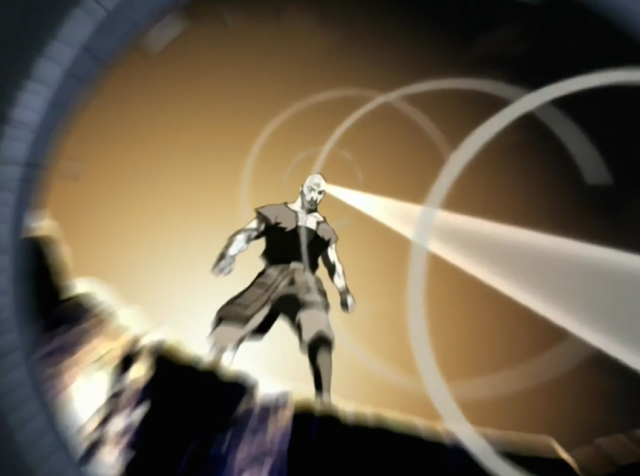 Anywhoodle, the gaang escapes, and they now know that an assassin who BLOWS SHIT UP WITH HIS MIND is hunting them. On the plus side, the Fire Nation doesn’t know Aang is still alive. Because the assassin wants the kill for himself. You know. The assassin WITH LASERS COMING OUT OF HIS FOREHEAD.