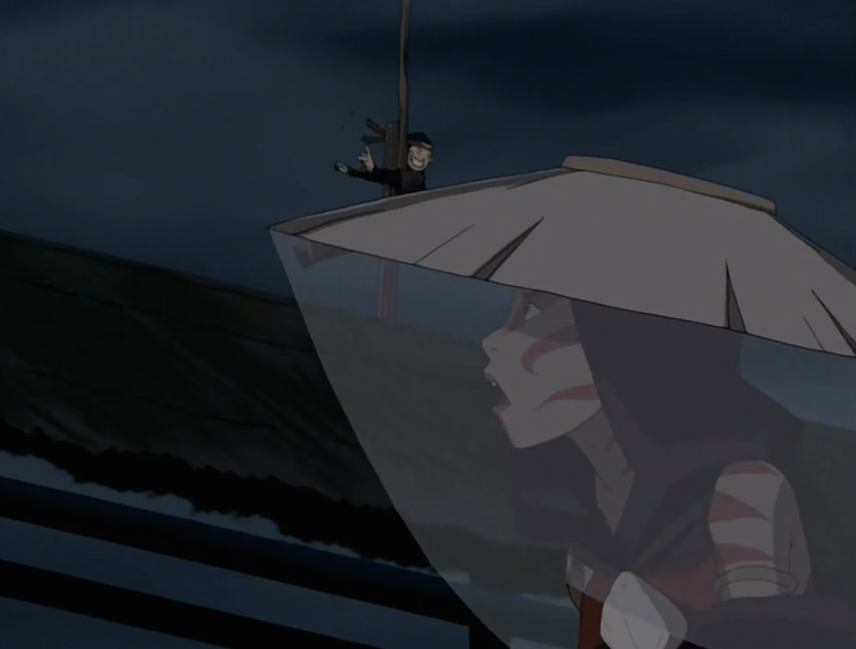 But I’ll deal with it, because this episode was basically “Katara is awesome for 24 minutes and everyone else can suck it,” and I am completely OK with that.

Things I am also OK with: Sokka calling his fishing skills “off the hook.” Everyone else’s reaction:

I have the sense of humor of a fictional teenage boy. It is not something I’m worried about.

OK, so here’s the deal with “The Painted Lady”: Sokka is ob-frigging-sessed with the gaang’s schedule—color-coded and in chart form, Hermione would be so proud— 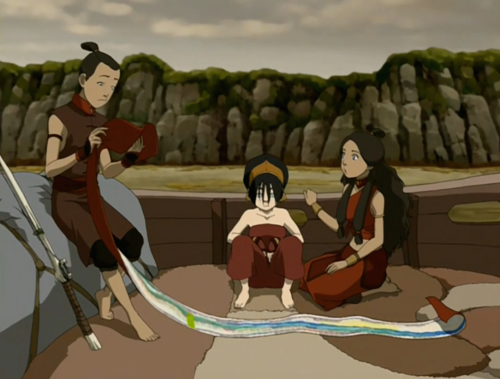 …so he’s determined to take minimal breaks on their way to Casa De Fire Kingdom Dickbag, because they do kind of really, really need to get there before the eclipse (which lasts for EIGHT MINUTES) hits. All the same, they have to stop at a village to get food. The village in question is in the middle of a river that’s been funked up because of a Fire Nation arms factory nearby, and as a result pretty much everyone in the town is poor and/or hungry and/or sick. Katara’s determined to stay and help, but Sokka points out that they’ll help no one by letting Fire Lord Ozai take over the world, so they really need to be on their way. The rest of the group backs him up, and Katara reluctantly agrees with them.

At least until a little beggar kid comes up to Katara and asks her for food, that is. WELL. THAT’S IT, FOLKS. SHE’S GONE. SHE’S SAVING THIS VILLAGE, AND FUCK WHAT ANYONE ELSE HAS TO SAY ABOUT IT. 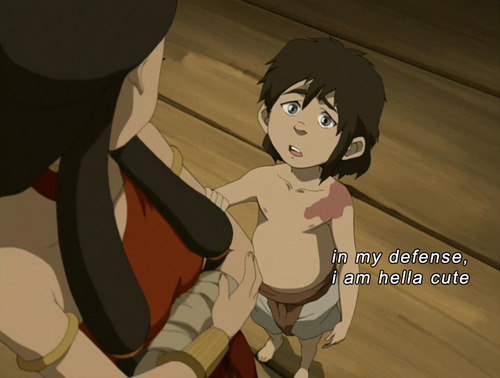 (Side note, because it doesn’t really fit anywhere in the “plot” aspect of this recap, but it’s weird, and I want to talk about it—there’s this guy with… Dissociative Identity Disorder, I guess?… who says he’s three different brothers, but it’s all the same guy. It was played for laughs, and I get the need to spice up what’s basically a bottle episode with a very limited scope, but… I don’t know. It creeped me out a little bit in the way it was HAHAHA CRAZY GUY LOL SO FUNNY. It seemed out of place, and a little weirdly dark in a way that Avatar doesn’t tend to go. For all that it goes dark in other ways. See: Child abuse. Anyway. Moving on.)

After picking up some truly disgusting fish, they get back to the river, only to discover that Appa’s fallen ill. Katara says that her healing waterbending skills won’t do anything to help (alarm #1) and suggests that they go back to the town (alarm #2) the next day to look for herbs. When they do, they discover a much better place than the one they left the day before. Turns out the Painted Lady—the river’s legendary spirit protector—popped in overnight to drop off some vittles. Unfortunately, there are no meds, as the factory uses all of them, so everyone has to cool their heels for another night while they let Appa rest.

That night—zoom zoom, the Painted Lady’s back in town! She visits the hospital and heals some sick people. I’m disappointed to say that at this point I hadn’t realized it was Katara, even though she’s floating in on water and is healing people with glowy magic. Oh, and the next day Katara lets loose on Sokka all “YOU SEE WHAT ONE PERSON CAN DO TO HELP? HMM? HMMMM?” In my defense, I was distracted by a lack of Zuko. I kept wanting to see that stupid season one ponytail behind a building or something. Anything.

Meanwhile, Sokka’s put on some Eau De Ayn Rand Objectivism—these people have to look out for themselves, if the Painted Lady went away they’d be completely helpless, yada yada. He also suggests that if the Painted Lady really wanted to help she’d use her “spirit magic” to destroy the factory. Cue Katara being pissed at Sokka and Aang’s flippant goofball behavior. 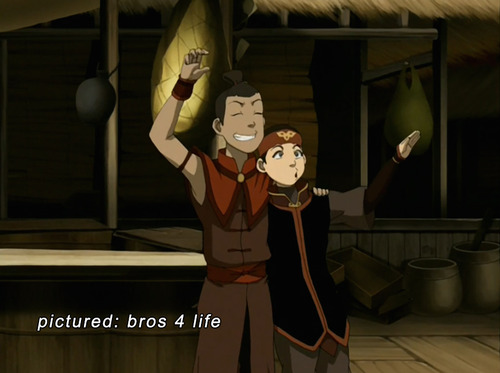 That night, surprise! Katara is the Painted Lady! Aang sees her and, not realizing who she really is, chases her down for a chat. “Come talk to me! I’m friends with the giant panda? I’m the link between the human and spirit worlds! DON’T YOU KNOW WHO I AM?!?!”

After a rollicking chase scene, Aang catches up with the “Painted Lady” and sees that it’s really Katara, who explains that she didn’t intend to impersonate this nature spirit. That’s just who people thought she was after the first night, so she leaned into it. Oh, and also, Appa’s not sick. Katara’s just been feeding him berries that made his tongue purple.

(I used a Snape gif. I feel unclean.)

Aang, far from being angry, is like HOLY SHIT MY FRIEND IS A SUPERHERO, which is the correct response to Katara’s life and existence. They proceed to destroy the factory together, which you can tell isn’t going to work because A) logic dictates that it’ll just make the people who run the factory angry, and you won’t like them when they’re angry. It’s not like they’re just going to shrug and leave, and B) there are still ten minutes in the episode. So it’s a tactical error, but it’s one that gives us Aang’s pyro face, so I’m going to count it as a win. When they get back the next morning, Sokka’s put two and two together and realizes that Katara’s the Painted Lady, and he is pissed.

Side note about Toph: She’s basically a background character this episode. But that makes total sense, because it’s established through a few words and just the expressions on her face that the river village makes her hella uncomfortable because, as it’s not on land, she can’t see when she’s there. Just because she doesn’t have much to do doesn’t mean the writers forget about her and her characterization. DETAIL!

Sokka demands that they leave right the hell now, but then whoops, the Fire Nation thugs who ran the factory show up to burn the village to the ground, because they think the villagers are responsible. And how do you think the factory fuckbagels got to the village? If you guessed anything other than FIRE NATION JET SKIS, you are wrong, my friends. 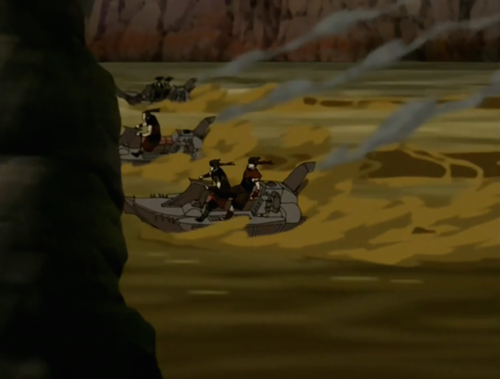 Fire Nation jet skis. Let me have this.

So now the gaang has to step in and fix the mess that Katara and Aang accidentally caused. But hey, it all works out well, because JUSTICE and FRIENDSHIP and GOOD INTENTIONS. Sokka tells Katara that she never should have helped the villagers in the first place, because look what happened, but Katara adamantly responds that she’ll never, ever turn her back on people who need her. I wasn’t sold on this episode until this moment—it was a little boring, a little feels-light. But then “The Painted Lady” turned into THIS IS KATARA’S CREDO, MOTHERFUCKERS, THIS IS WHY SHE’S AWESOME, and yanno what? I can wait an episode for more Zuko-ness.

Sokka responds that he’ll never turn her back on her, so you can count him in for Operation Katara-Disguised-As-the-Painted-Lady-Goes-to-the-Village-and-Fucks-Up-the-Fire-Nation. The moment makes Aang tear up, but Toph’s just like “Fuck this emotional shit, let’s go bust some heads.”

Katara and Aang combine their bending powers to scare the Fire Nation soldiers off, while Sokka, Toph, and Appa are offstage making freaky noises to add to the showmanship aspect. Man, they’re being pretty conspicuous—I HOPE THEY’RE NOT BEING HUNTED BY AN ASSASSIN OR ANYTHING.

After the Fire Nation soldiers leave, the three-guys-who-is-actually-one-guy recognizes that the Painted Lady is actually Katara, and all the villagers get pissed at her for impersonating their spiritual protector. Sokka jumps in to defend his sister, saying they should be down on their knees thanking her (TRUE, TRUE), and Katara tells him to knock it off. By name. As in “Sokka, STFU,” like Sokka is not well-known as one of the Avatar’s buddies. Even if the Fire Nation thinks Aang is dead, and the gaang doesn’t know they’re being hunted by an assassin… children, please. Code names. You know Sokka would be all over that shit.

Katara apologizes to the villagers for tricking them and follows that up with a hard dose of reality, of the “You have to deal with your own fucking problems, you idiots” variety Toph suggests that the villagers clean the river, which they and the gaang manage to do in like… a day? Maybe? Leslie Knope would love you guys. Oh, and the villagers promise not to tell about Katara being a waterbender.

The episode ends with the Painted Lady popping down to tell Katara thanks for doing the village a solid, and DAMN, Painted Lady, were you playing Minesweeper? Where were you the whole episode? Whatever. Spirit magicks. PAINTED LADY OUT. 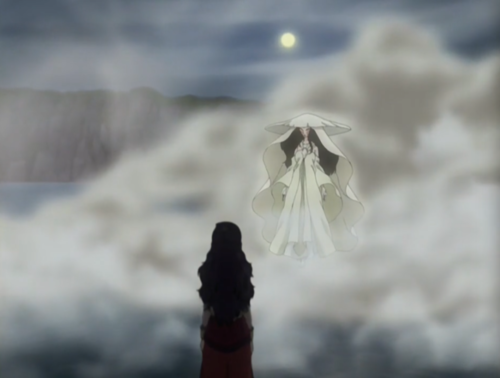 (When the Painted Lady first came down from the sky, by the by, I thought for a split second she was Yue. I need it to be an unimpeachable canonical fact that she zaps down from moonland so the two of them can celebrate Galentine’s Day and talk shit about about Sokka. Toph can come too.)