Here's something to be thankful for! 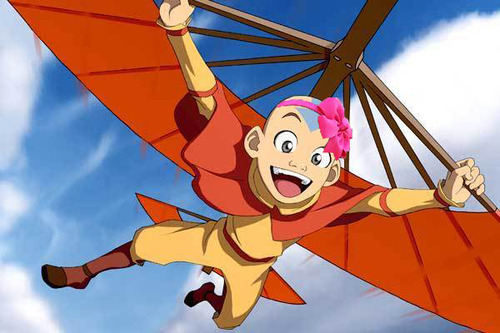 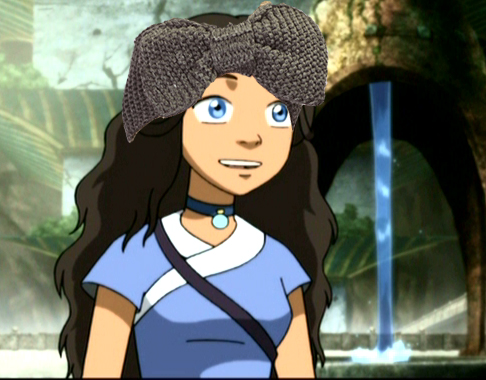 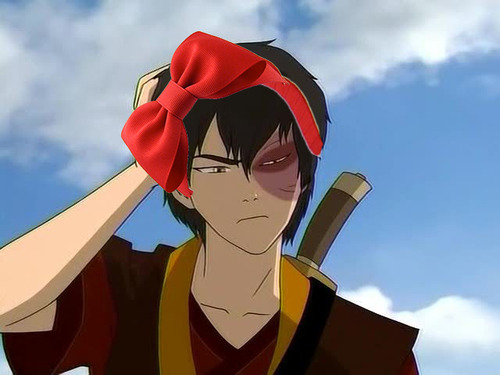 What, you wanted more from me than stupid Photoshops of Avatar characters wearing headbands?

Aang has whipped up some lovely cloud cover for Appa to fly in, which is a pretty clever way of keeping the Gaang out of the sight of the Fire Nation. Sokka doesn’t think it’s enough—he’s super paranoid about them being discovered, and as such is determined that they should all be cave people until the invasion starts. He’s outvoted by Katara, Aang, and Toph, who would much rather live in an actual city. To do that, they need to steal some clothes, which at first Aang is iffy on (cupcake!), but then he sees Katara and gets all hearteyes. 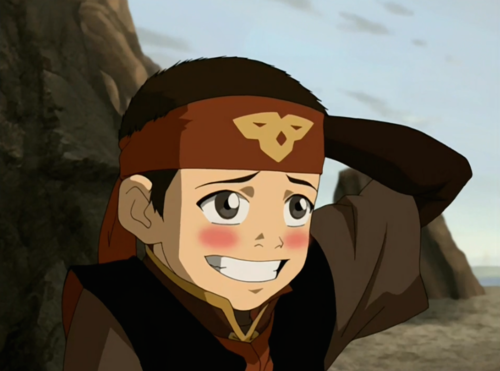 Back before Aang turned into an Avatarsicle, he had a BFF in the Fire Nation, so he considers himself the resident expert. Cue him wandering around the city greeting everyone with “hotman… hotman… hotman…,” which I kind of want to start doing now. It takes him about 5 minutes to be discovered and carted away… to school, because the people who caught him think he’s a truant Fire Nation soldier and not the only person who can bring about the defeat of their nation. Whom, to be fair, everyone thinks is dead. And who can recognize Aang with hair, anyway?

Aang, who hasn’t had any formal schooling in like… 100 years, has a pretty good time! He makes some new friends, stands up to a bully, and becomes determined to teach his fellow students about the power of fun. You know. Normal Aang stuff. The Fire Nation educational system, not surprisingly, doesn’t really put much emphasis on the arts. They’d probably be all over standardized testing, if only the Scantron existed. Katara and Sokka aren’t too pleased about the “enroll in a Fire Nation school” plan—it’s not exactly inconspicious—but Aang points that learning more about the Fire Nation can only be a good thing. He knows what the Fire Lord looks like now, and he knows there’s a legend about a secret river that goes right to the Fire Lord’s palace. METHINKS I SPOT SOME FORESHADOWING. Sokka replies that “I am a fan of secret rivers.” Just not secret tunnels, though, right?

Katara and Sokka are so on-board with the plan that they pretend to be Aang’s parents when he gets called in for a parent-teacher conference for tussling with the aforementioned bully, who took exception to Aang talking to his girlfriend On Ji about dancing (which is strictly forbidden in the FIre Nation). Sokka gets really into it. 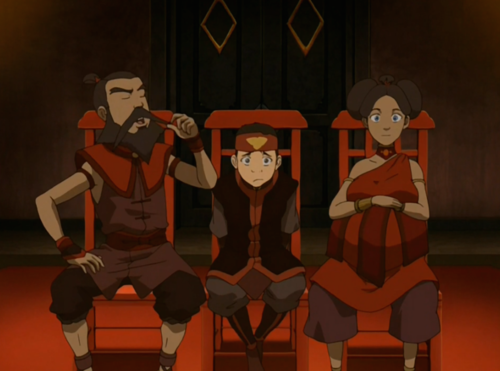 He goes to visit Iroh in prison, and Iroh just… avoids the hell out of him. Turns away, doesn’t say a word, doesn’t even acknowledge his presence. The second time he visits Iroh, Zuko absolutely loses his shit, calling Iroh a crazy old man (just like Azula does), all the while sporting a rather impressive pair of crazy eyes himself. 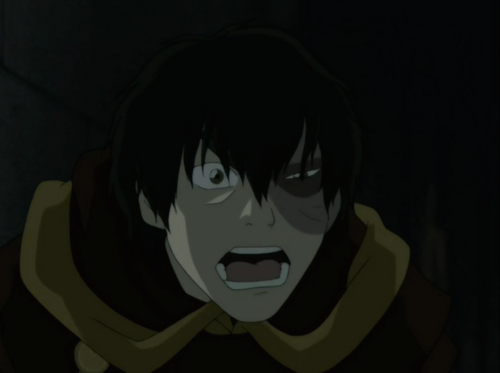 ZUKO, STOP BEING A DICK TO YOUR UNCLE.

I realized something recently. I’ve seen gifs floating around of Zuko after he joins the Gaang—him telling Sokka “that’s rough, buddy,” him in that play episode I can’t wait to get to, etc. But Iroh isn’t in any of those. He’s… he’s just offscreen, right? He doesn’t sacrifice himself to save Zuko, right?!

Then we get a short scene of Mai and Zuko being all lovey-dovey. This is what lovey-dovey between them looks like:

Mai: Orange is such an awful color.

Zuko: *awkward laugh* You’re so beautiful when you hate the world.

It’s so beautiful. Also, I’ve figured out why I like Mai so much. She is essentially the Avatar version of Daria. 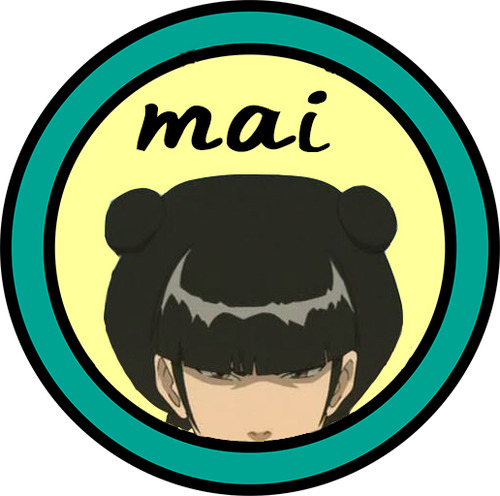 Which I guess makes Zuko Trent. 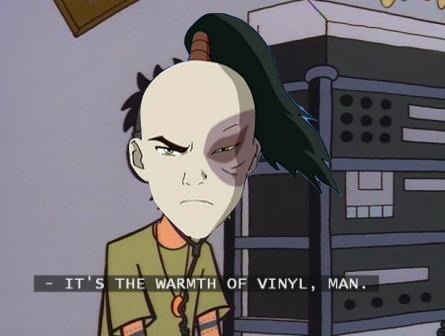 Azula interrupts their disgusted with the world picnic time to trick Zuko into revealing that he visited Iroh, which he really should’ve seen coming. Azula warns Zuko that associating with Iroh could make people think he’s plotting, and something about her delivery makes me think she’s being genuine. Not that she wouldn’t 100% use the knowledge that Zuko went to see Iroh against him if she needed to, but… it seems to me that Azula doesn’t see Zuko as a problem anymore. She thinks she’s beat him, so she can do him a solid and tell him to be careful re: Iroh, because there’s no way he can get one over on her now that she has him exactly where she wants him. Maybe I’m being too trusting here (Azula always lies) and Azula is planning to do something with the Iroh information, but… I dunno. Seems to me that Azula’s getting a little hubris-y. Combine that with the stink-eye Mai, one of her closest friends, shot her, and I’d say there’s trouble brewing for Azula on the horizon. 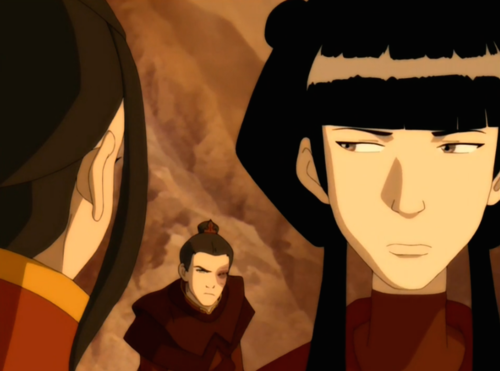 Back to Aang—he’s adamant about continuing his schooling, because this is the only time he’s gotten be a real kid. Further, he wants to throw his classmates a secret dance party, aka FIREBENDER PROM, because he believes that children are our future. Teach them well and let them lead the way! Show them all the beauty they possess insiiiiiide…

Aang and Katara get down with their bad selves and inspire the other kids who dance, too. They’re just like Kevin Bacon! Then the anti-dancing headmaster shows up and tries to apprehend Aang, but the other kids—many of whom are wearing the same headband as Aang, thus allowing them to divert the headmaster’s attention—help him escape. The Gaang hops on Appa and flies off into the sunset.

Things aren’t so great for Zuko,because when are they ever? He visits Iroh one last time and bares his soul, admitting that he thinks the Avatar is still alive and begging for his uncle’s help. But Iroh stays silent, because you didn’t seem to think his advice was all that valuable before, asshead. An angry Zuko tells Iroh that he’ll figure everything out himself, which should’ve been Iroh’s clue to step in and help his nephew, because if he doesn’t Zuko might do something monumentally stupid like, I dunno, hiring an assassin to kill the Avatar.