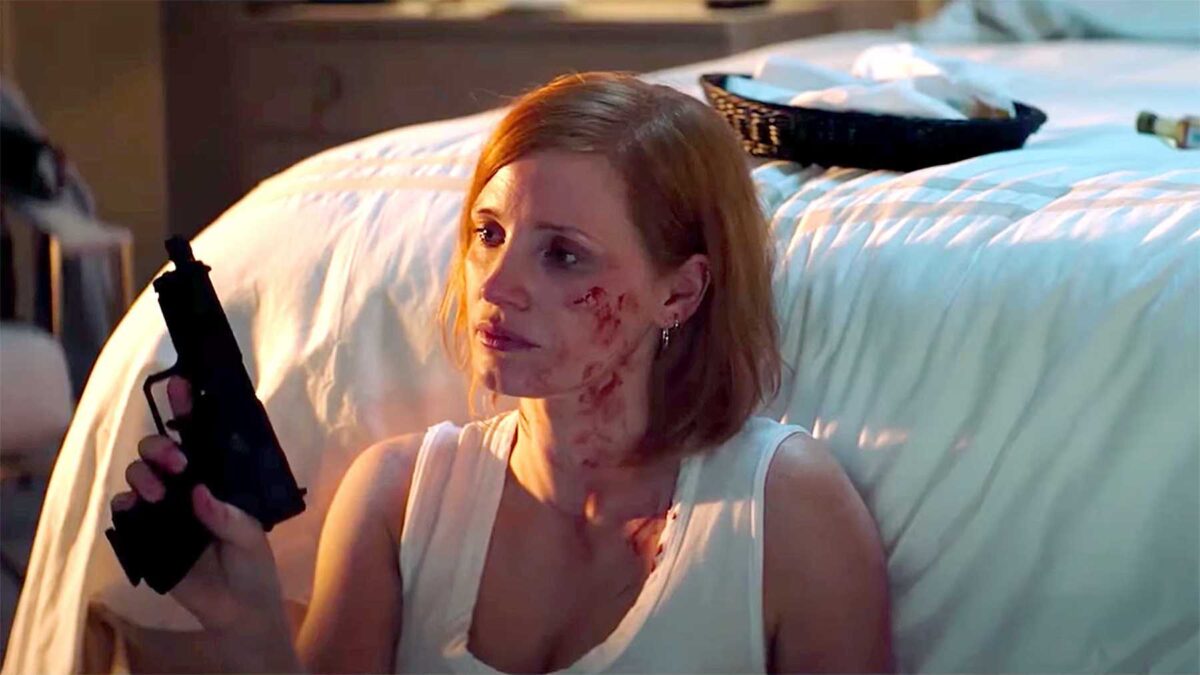 Imagine, if you will, an action thriller about a globe-trotting female assassin played by Jessica Chastain. And imagine that she’s joined by a killer cast that includes John Malkovich, Geena Davis, and Colin Farrell. Add to that director Tate Taylor, who has already delivered solid, if less than inspired work in films like Get On Up and The Girl on the Train. With everything going for it, Ava should have been an entertaining film.

But like many before it, Ava completely misses the mark. The set-up is simple: Skilled assassin and recovering alcoholic Ava (Chastain) travels the world killing wealthy, influential people for money. When a hit gets botched, her boss Simon (Colin Farrell) wants her erased, despite the protestations of her mentor/father figure Duke (John Malkovich). Amidst this career crisis, Ava returns home to Boston, where she reunites with her estranged family: sister Judy (Jess Weixler), mom Bobbi (Geena Davis), and former fiancée Michael (Common), who is now engaged to Judy (an unsettling story choice that is never adequately addressed).

Ava is hardly the first film to tackle the “assassins have problems too” genre, which has been explored in films ranging in tone from Grosse Pointe Blank to Léon to Mr. and Mrs. Smith. And it’s even been an exciting avenue for television, thanks to AMC’s Killing Eve, which brings style and dark comedy to a wholly unique killer character in Villanelle.

But Ava never picks a lane: it’s humorless, dry, and uninspired to the point that it feels like someone tried to shoehorn La Femme Nikita into a Lifetime movie. The action scenes are rote and uninteresting, and even the exotic locales aren’t filmed in a particularly flattering way. Every choice the film makes is safe, standard, and riddled with clichés.

Ava is only the latest entry in a genre filled with frustratingly forgettable female assassins. Like Luc Besson’s shallow Anna or Jennifer Lawrence’s lackluster Red Sparrow, these films follow all the same predictable beats: sexy assassin begins to regret her life choices just as her personal and professional life collide. Besson perfected this in his iconic 1990 thriller La Femme Nikita, a neo-noir film starring Anne Parillaud as a teenage addict turned assassin. The film was so popular it spawned multiple reboots, including two television series and the American remake Point of No Return, starring Bridget Fonda. Since La Femme Nikita, everyone has been copying Besson’s signature film with diminishing results, including Besson himself.

And it’s not the subject matter that’s the issue. Both John Wick and Atomic Blonde have elevated standard storylines thanks to strong performances, kinetic action sequences, and buckets of style. But there’s none of that in Ava, which remains thinly sketched to the point of confusion. What happened between Chastain and Common’s characters? Who does Colin Farrell work for? What is the relationship between all of these characters?

These questions are largely ignored by Matthew Newton’s paint-by-numbers script. The Australian screenwriter has a history of alleged assault and domestic violence, which caused some controversy when Chastain signed on to star in and produce the film. Chastain is, after all, a spokeswoman for Time’s Up and a frequent advocate for social justice.

All in all, it’s a deeply disappointing outing for everyone involved. Ava isn’t worth their time, and frankly, it’s not worth yours either.