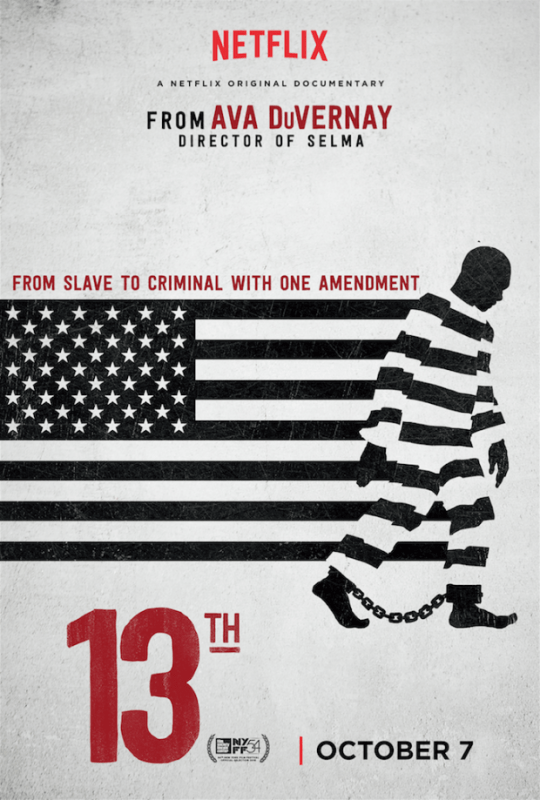 While you’ll have to go to Washington D.C. and visit the newly-opened National Museum of African-American History and Culture to see the Ava DuVernay short documentary, August 28: A Day In The Life Of A People, where it will be on view exclusively, there’s feature length documentary of DuVernay’s that you’ll be able to see in your own home this next month.

13th is a documentary that examines how the 13th Amendment, which abolished slavery “except as a punishment for crime,” has been used to continue to subjugate the black community in the United States in what basically amounts to a new version of slavery through the criminalization of being black. Check out the trailer for the film:

According to The Film Stage, this is the official synopsis of 13th:

The title of Ava DuVernay’s extraordinary and galvanizing documentary 13TH refers to the 13th Amendment to the Constitution, which reads “Neither slavery nor involuntary servitude, except as a punishment for crime whereof the party shall have been duly convicted, shall exist within the United States.” The progression from that second qualifying clause to the horrors of mass criminalization and the sprawling American prison industry is laid out by DuVernay with bracing lucidity. With a potent mixture of archival footage and testimony from a dazzling array of activists, politicians, historians, and formerly incarcerated women and men, DuVernay creates a work of grand historical synthesis.

DuVernay says of 13th, “This film was made as an answer to my own questions about how and why we have become the most incarcerated nation in the world, how and why we regard some of our citizens as innately criminal, and how and why good people allow this injustice to happen generation after generation.” As we see in the trailer, it also implicates politicians on both sides of the aisle, as well as the capitalist nature of our prison system.

I feel so dense for never having made this particular connection before. After all, we all learn in school that the 13th Amendment is the one that abolished slavery, but how often do we look at the actual words. How often to we look for the exceptions in laws to see how they’re actually applied in practice. Because no, it isn’t legal to make someone a slave. However, if they are convicted of a crime, it’s totally okay to treat them like one, never mind that they don’t stop being human beings after committing those crimes. Throw in the fact that black people are incarcerated at five times the rate of white people in this country, and you can start to see how slavery didn’t really end, it just evolved.