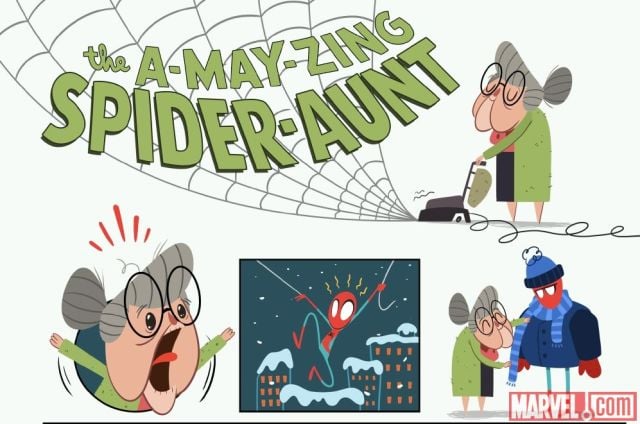 OK but now I want this as a movie.

Yesterday we told you about the possibility of Sony creating an Aunt May espionage period piece. Yeah. Turns out, that’s not happening. Comic Book Resources reports: “When reached by CBR News, a source within Sony stated that the report of a Spider-Man spinoff starring a young Aunt May is a “silly rumor” with “no validity whatsoever.”

But if you were actually looking forward to seeing Aunt May in action, fear not! Marvel has announced Cale Atkinson would be doing a two-page story in this December’s Amazing Spider-Man Annual titled “A-May-Zing Spider-Aunt.”

Atkinson had this to say, “One minute she may be helping Spidey fight off villains with a frying pan and the next calling an insect exterminator on him! With great May-power comes great May-sponsibility. Yeah that’s right I just said that.”

So I’ll obviously be picking this up.