Why Are Audience Q&As the Absolute Worst? | The Mary Sue

Things We Saw Today: Why Are Audience Q&As the Absolute Worst? 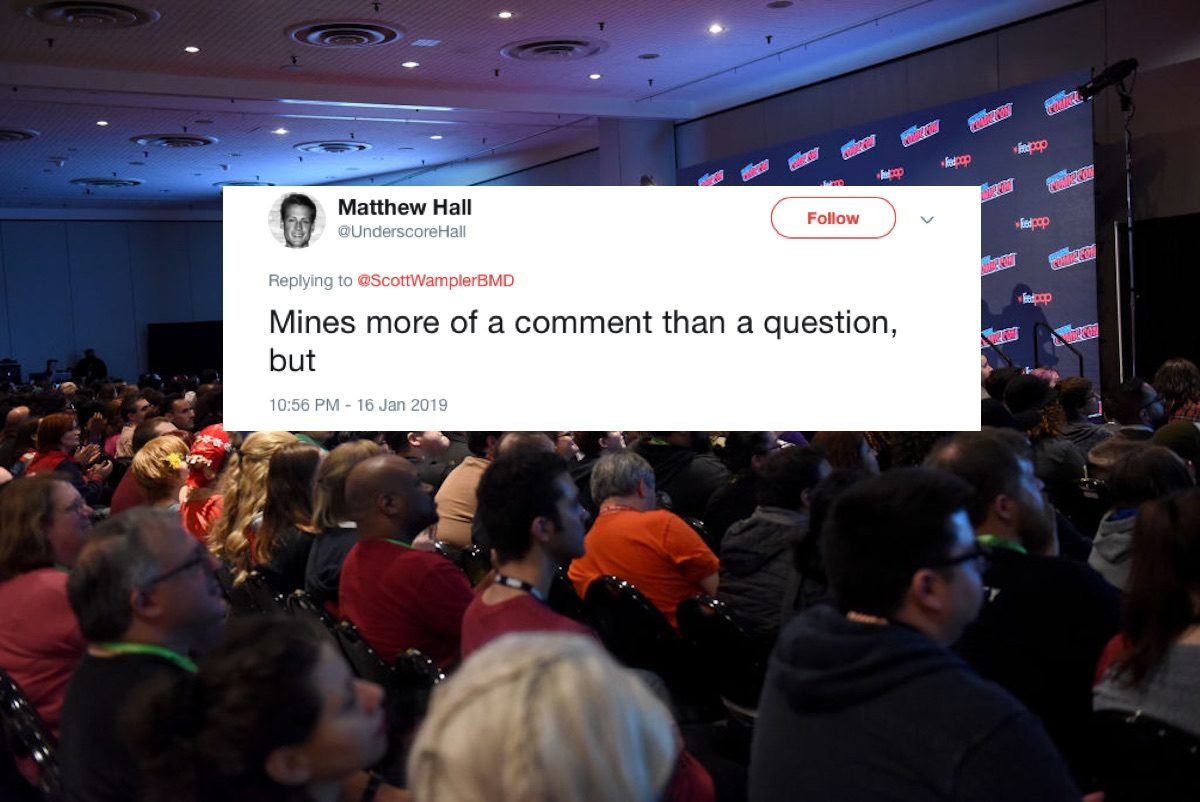 If you’ve ever been to an audience Q&A session or sat through the question line at a con panel, you know that there are inevitably terrible, horrible, no good, very bad questions asked. This has been true of every Q&A and junket I’ve ever attended, and I’ve been covering cons for more than a decade.

Birth.Movies.Death editor Scott Wampler kicked off this trip through nightmarish Q&As and press junkets on his Twitter account, asking:

Literally everyone in this stupid business has an A+ “crazy guy at the junket/Q&A” horror story and I want to hear everybody’s right fucking now. https://t.co/qZNMfZDI6L

I’ve included some of my favorite responses to Wampler’s query below. But before we dive in, we really have to spend a moment ruminating on how universal and frequent these occurrences are.

The great majority of us have experienced people asking bizarre/insulting questions, or inappropriately using their time to try and get close to the stars (“Can I have a hug?” / “Can I have a kiss?”), or, worst of all crimes, standing up and saying, “This is really more of a comment than a question.” This should result in a guillotine being slowly lowered down from the ceiling, or at least some slime You Can’t Do That On Television-style.

I’d like to further emphasize that this isn’t just to call out fan questions. Many of the responses on the Twitter thread are from reporters chiming in with things they’ve seen go down at junkets and in press rooms, where everyone is supposed to be a professional who should damn well know better. And sometimes the awfulness at con panels is either induced by a bad moderator or could be better controlled/directed by a better moderator.

Moderators, for the love of everything: please don’t ask your panel to name one thing they love and one thing they hate about [a thing] and then slowly crawl down a line of 10 panelists. I’d rather have my teeth cleaned than listen to people scramble to come up with a different answer than the person next to them.

Anyway, here’re the Tweets that either made me exclaim “YUP!” internally on the subway because I’ve witnessed the same thing, and those that made me widen my eyes in horror at the audacity of humanity.

Right after a preview for a now cancelled tv show, some dude got up and asked if the CAST MEMBERS could read his screenplay and rate it in front of all of us. You could feel the tension in the room as we all thought of ways to kill this man and get away with it as a community.

I mean there is nothing (not even “Insidious” Cat Guy) worse than “this is actually more of a comment” people BUT there was a Q&A at The Post where someone tried to tell Spielberg/Hanks to their faces the movie had plot holes????

At a panel for The Magicians, some guy asks Jason Ralph why Quentin is a total “p*ssy” who everybody hates. Not missing a beat, Jason replied “Well, f*ck you too,” and the guy was laughed back to his seat.

Someone asked Charlie Kaufman about the meaning of ANOMALISA. He rants for five minutes about how we shouldn’t ask these questions, that art should be interpretative, that’s what he loves about art. Huge applause. Next guy takes the mic. “What did the doll at the end mean?”

20 years ago when James Cameron was in Mexico, a full two weeks before the movie was released there and before any of us had seen TITANIC, a woman who’d already seen it opened the Q&A with: “You know, you didn’t have to kill Jack.”

In 2008 Hillary Clinton and Maya Angelou spoke at my college. Lady gets the mic and, in front of thousands, begins with “Hillary I’m such a fan. I was so sad when Bill has his affair.”

A girl definitely tried to sell herself as a hip-hop dancer to Seth Rogen at the Preacher panel at SXSW a few years ago and tried to convince him to come watch her dance while he was there. No commentary on Preacher. Just sold herself.

I didn’t see it firsthand, but I heard from a publicist who had worked the previous day on the junket for “Margot at the Wedding” that a journalist said to Nicole Kidman, “It’s been several years now. Are you ready to talk about the miscarriage?”

On set of The Punisher someone asked Jon Bernthal if he saw himself as a role model for actual marines. The look on Bernthal’s face could’ve killed a full grown human being

I was at the INDEPENDENCE DAY RESURGENCE junket and the woman before me at the interview demanded that Liam Hemsworth say that she looked pretty in her yellow dress. And I had to go in after that. He looked exhausted.

“Not so much of a question as this is just… I came up here because I wanted to say ___ means so much to me and I’m a really big fan, so thank you for all the work you did on it and-“

at a nerd convention Q+A with Brian Thompson, after a long and funny anecdote about working on Kindred: The Embraced and Buffy, a huge elder chud stood up and grabbed the mic to ask “.. what.. what does Buffy’s hair smell like?”

I’ve been moderating Q&A’s for years. I’ve got DOOZIES but I gotta sleep.

ok here’s one: Joker cosplayer who does a *horrible* Hamill Joker voice asking Harley Quinn voice actress (addressing her “Harley”) about taking him back.

Sometimes it’s not the fans or reporters who need to learn how to behave.

Also does an actor count as a crazy guy as a press junket? Someone who won’t be named sat down, without shoes, proclaimed loudly that he needed to pee and was hungry…and then couldn’t answer any questions about his show because “I live in the moment, I don’t remember the past”

Moderators should just start using this introduction at Q&As. pic.twitter.com/qTYkvv85ui

Or maybe we should use the Gaiman maneuver going forward?

You also get to answer twice as many questions…

And don’t forget, kids—always strive to avoid being this person:

There are so many incredible responses to Wampler’s thread. Be sure to click through to read the entirety of its cringe-worthy glory. Where did we go so wrong as a species?

Happy weekend! Happy long weekend, if you’re headed into one! What did you see today?