Aubrey Plaza Is the Breakout Obsession of “the Lesbian Christmas Movie” 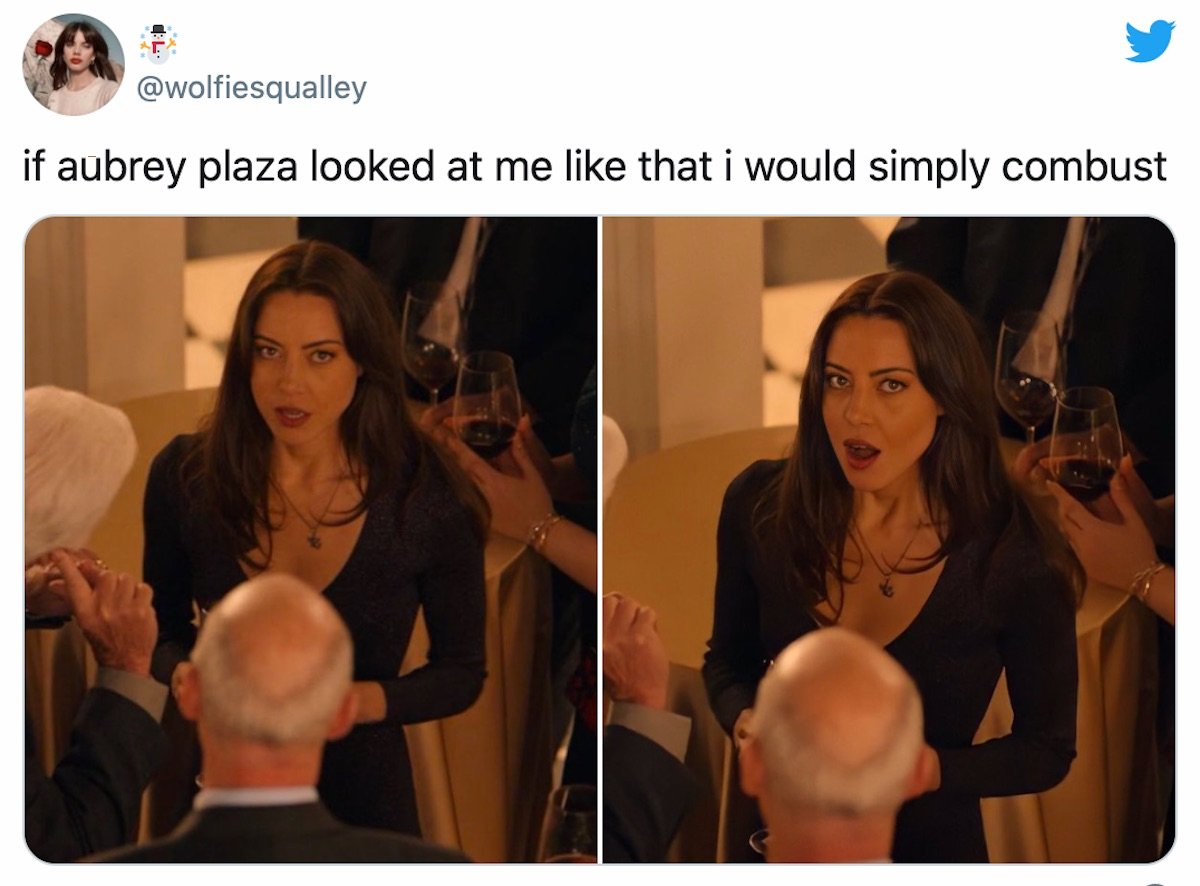 Many folks have been watching Happiest Season on Hulu—and the object of mass affection isn’t one of the main characters. The Clea DuVall-directed movie stars Kristen Stewart as Abby and Mackenzie Davis as Harper, a lesbian couple who go home for holiday hijinks. It’s wonderful that we’re finally getting festively-themed queer films with a happy ending for the featured couple. But the real breakout of the movie appears to be Aubrey Plaza, who plays Harper’s ex, Riley.

If anyone needs 2,000 words on Aubrey Plaza’s eye contact let me know pic.twitter.com/LFrxYd0pMZ

aubrey plaza is so hot in happiest season would love for her to take my life pic.twitter.com/OzQ8Mk3Gvn

The Parks and Rec actress has been garnering a lot of enthusiastic response online, as well as sparking a cottage industry of commentary about how her character was a superior choice as a romantic match-up than the actual romance at the movie’s center.

Absolutely should’ve ended up with Aubrey Plaza. No contest.

Gutowitz argues that Harper is a “mutinous and undignified character” who “devolves into a toxic gay cretin” after she asks Abby to pretend they aren’t together when they go home to her family, where she is still closeted.

By contrast, when it comes to Plaza’s Riley, who bonds with Stewart’s Abby:

This is a love letter to Riley, who as everyone who watched this rom-com surely knows, Abby should have ended up with. Aubrey Plaza’s charisma as the power-bitch lesbian doctor with a sardonic bite of humor is so powerful that even though she doesn’t do anything objectively sexual, I’ve never been more bowled over by a character’s sexual energy in my little gay life.

Riley and Abby would have been the better couple for many reasons in this view, including the vital fact that “Riley had actual chemistry with Abby, and stuff in common! They both attended prestigious universities, they’re both out and comfortable with themselves, and they both wear breathtaking suits.”

The suits in question:

women don’t want men, women want aubrey plaza and kristen stewart in the suits they wore in the finale of #HappiestSeason pic.twitter.com/4bjBvFw6AH

A glance at Twitter shows that Gutowitz is hardly alone in her take. In fact, it was nigh-on impossible not to see Plaza Talk in recent days; she trended upon the movie’s release.

27k likes! Even Hulu’s official account is jumping on board the Aubrey Plaza Appreciation, recognizing what the people want.

It turns out that Plaza herself joked that she hopes people walk away from the movie ready to riot that she doesn’t end up with Kristen Stewart’s character.

Aubrey Plaza in happiest every wlw
season in the world pic.twitter.com/jBkfDXP2Qb

how does aubrey plaza just keep getting hotter… it doesn’t seem sustainable in our current circumstances. what if this isn’t even her final form

I was REALLY unprepared for the Kristen Stewart and Aubrey Plaza of it all in Happiest Season and I haven’t fully recovered #HappiestSeason pic.twitter.com/uhO52h0Txe

What’s our takeaway here? Well, first of all, no one was prepared for the sheer amount of Looks that Aubrey Plaza is serving in Happiest Season. Second of all, the Internet has made its judgment, and we’ll likely be getting a host of Happiest Season fanfiction that ends the story in another way. This is the stuff that fanfiction dreams were made of. (There are currently 11 Abby/Riley stories on AO3.) Of course, the amount of chemistry and response that a potential Stewart/Plaza matchup has generated also means that folks are dreaming of seeing them take on a whole new narrative:

concept for new movie: kristen stewart and aubrey plaza playing con artist enemies who gotta team up to pull off a master plan but fall in love in the process of it. make it happen @TaikaWaititi #HappiestSeason pic.twitter.com/RLWSupvvWJ

Just take all of our money, every last cent of it.