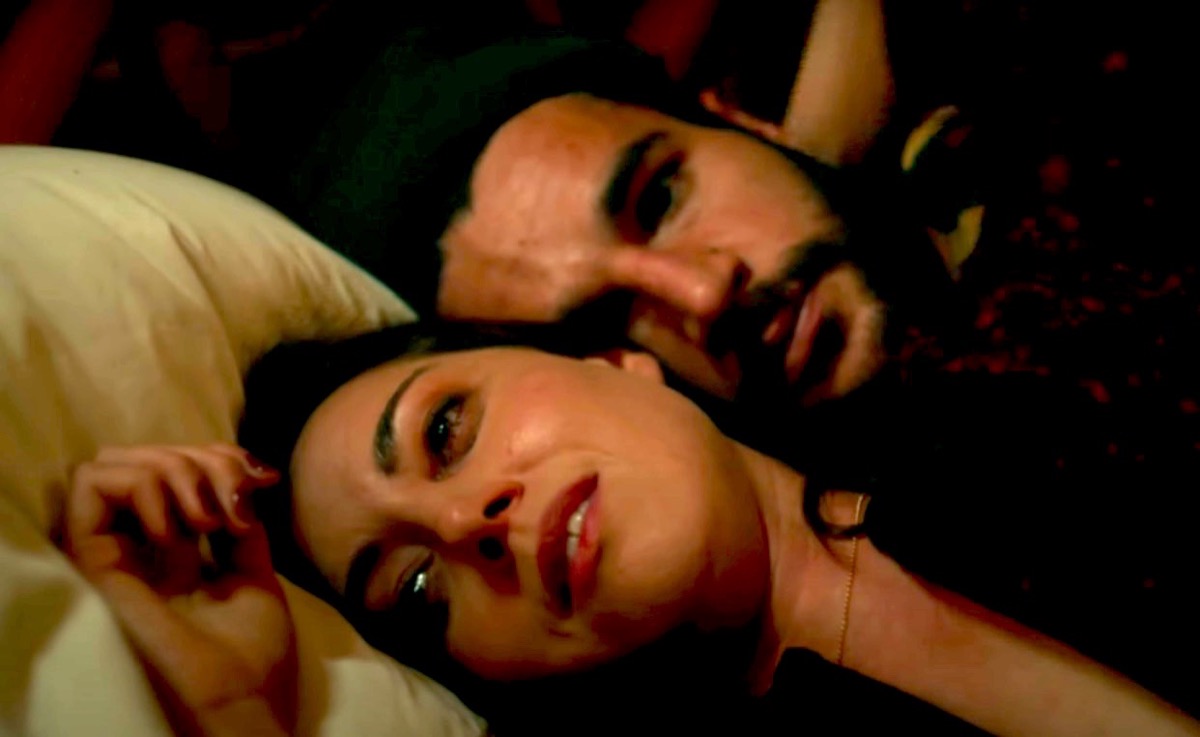 With her turns in Ingrid Goes West and Legion, Parks and Rec star Aubrey Plaza has proved to have exceptional range, mastering dramatic and humorous undertones. Her latest acting and producing gig, writer/director Lawrence Michael Levine’s Black Bear, is a wild rollercoaster ride that demands you keep your eyes open. This thriller is a feverish nightmare that kicks off as a play-like drama and morphs into a satirical love/hate letter to independent filmmaking. As such, it focuses on the power dynamics on set, messing with the viewer’s notions of commitment, love, and art-making.

Shot in chronological order, Black Bear steers clear of providing viewers with a specific time setting. The location, on the other hand, is crucial to the story. In a remote lake house in the Adirondack Mountains, the power dynamics between the characters constantly evolve. The non-linear events are tied together by recurring symbols: the lake, a red swimsuit, and the titular bear.

In the first half of Black Bear, Plaza plays actress-turned-director Allison. The protagonist has temporarily left the city for this new, quiet setting as she searches for a brilliant idea for her next film. In the process, she upends the tranquil life of her hosts, Gabe and his pregnant girlfriend Blair, played by Christopher Abbott and Sarah Gadon.

Allison enjoys observing the pair and bringing their silent, passive-aggressive conflicts to the surface. In this first act, Plaza retains the title of queen of deadpan that she has earned throughout the years and plays with it.

“You’re really hard to read,” Blair tells Allison, who has been lying her way through dinner.

“You know what, I get that all the time,” she replies, and it’s impossible to tell whether it’s Allison or Aubrey who’s speaking.

A cynical femme fatale and a bright, positive, no-nonsense mother-to-be, the duality of Allison and Blair reminds the audience of Laura Elena Harring’s Rita and Naomi Watts’ Betty in Mulholland Drive. When viewers think they have figured out the dynamics at play between the women of Black Bear, the movie completely shifts in tone—and it gets all the more disturbing for that.

The second half turns the lake house into the set of an indie film, also titled “Black Bear.” This is a meta attempt to recreate the frantic atmosphere of a low-budget passion project, with actual crew members filling in for some of the roles. Black Bear’s Levine has been in the filmmaking industry for decades, together with his wife Sophia Takal, who serves as producer and to whom the movie is dedicated. Here, the director crafts an unusual drama encapsulating a witty, almost cruel fascination with moviemaking à la François Truffaut’s Day for Night.

In this second act, the same characters return, but the dynamics between them have changed. Now, Allison is married to director Gabe and stars in his movie with Blair, a talented actress. It isn’t clear whether the characters are different versions of themselves or if the second act is set before or after the first. Through this narrative device, Black Blear puts the spotlight on how toxic relationships can inform someone’s personality and force them to lose a sense of who they are.

In part two, tension is at an all-time high. Everyone on set is waiting for Allison, who has been drinking ahead of a vital, closing scene. The sequence is a fictional reenactment of the dinner the audience witnessed in the first half, with Allison and Blair trading places. While Blair suspects Gabe is attracted to Allison in the first act, it’s now Allison’s turn to cave to jealousy and channel those feelings in her performance.

Gabe pushes Allison to the very edge to get a genuine reaction. She needs to believe she has been cheated on, he thinks. By manipulating his wife and convincing her that he’s sleeping with Blair, Gabe embodies a certain toxic male filmmaker stereotype. The character brings to mind a number of directors accused of exploiting their actresses-muses for art’s sake. From Hitchcock to Bertolucci, film history is filled with actresses denouncing the careless practices some male directors have employed.

In Black Bear, however, the manipulation never overtly crosses the line of what is acceptable. It plays on a sneaky psychological level, instead. The film features a jarring scene where Gabe asks the boom operator to keep recording the room tone of Allison sobbing, even when she’s no longer in character. As Gabe comforts his devastated wife, the camera pans on the crew members’ faces. They’re bewildered but also eager to wrap.

The whole scene is a tour de force for Plaza/Allison, who lays bare her body and soul. Blurring the lines between reality and fiction, Black Bear presents an actress and her character at the top of their game. Plaza’s unhinged Allison echoes complicated, layered women such as Liz Taylor’s Martha in Who’s Afraid of Virginia Woolf? and most prominently Gena Rowlands’ Mabel in A Woman Under the Influence. Premiered around the same time as Black Bear, Shirley also poses an interesting comparison. Starring Elisabeth Moss as author Shirley Jackson, the movie features a heavy-drinking, sharp-witted protagonist in a creative rut, willing to go to great depths to overcome her block.

Black Bear doesn’t have a clear-cut ending. Leaving things open is precisely the point of this unnerving, uneven thriller that some might find frustrating. In the dreamlike epilogue, however, Allison seems to have grappled with her trauma by going on to write her own films. Early on in the movie, she says that filmmaking is the only way she knows to convey what she has to say. After scribbling down in her notebook, the protagonist stares right into the camera. She regains her agency. It’s her gaze she’s offering, and it’s fiercely female.