I’m late, I’m late, but I finally caught up on this recent season of Atlanta (Atlanta: Robbin’ Season) and just like the first season, it manages to mix surreal moments that reach Twin Peak levels, with a very authentic blackness that makes me alternately howl with laughter or get super contemplative. The most recent episode “Helen” was the latter.

For those uninitiated in the ways of Atlanta, the show is about Donald Glover’s character Earnest “Earn” who is managing his cousin, the rapper Alfred/Paper Poi(Brian Tyree Henry) in Atlanta, GA. The main supporting characters are Al’s best friend Darius (Lakeith Stanfield) and Vanessa (Zazie Beetz) who is Earn’s on-again/off-again girlfriend and mother of his young daughter.

“Helen” puts Vanessa and Earn’s relationship front-and-center along, with all the messiness that comes with cohabitating with someone who you may love, but who doesn’t respond to that love in kind. While the relationship drama between Earn and Vanessa is an excellent narrative on its own–and I appreciate that despite the male-driven narrative of Atlanta it, much like Issa Rae’s Insecure, understands the importance of telling layered black narratives for men and women–it is the insight we get into Vanessa’s identity that it interesting.

Vanessa, like her actress, is shown to be mixed-race German and black (Zazie Beetz speaks fluent German as well) and so Oktoberfest and all of her German traditions are as important to her as her blackness. They go to Helen, GA to celebrate the holiday, with Earn angsting the whole time. All throughout the episode, we see how she navigates her German heritage. She even says in the beginning “I’m like the Serena Williams of the festivities. They hate, but they can’t deny the stats.”

She warns Earn that there is a Moor character and therefore people sometimes dress up in blackface. In fact, there is a scene where one woman things Earn’s skin is blackface until she gets closer and realizes that he is a real black person. While played for humor and through Earn’s detached, silent anger, the reality is that we are witnessing what Vanessa has gone through her entire life. A lifetime of microaggressions in which her being mixed race may have made her more “approachable” but it did not make her entirely integrate.

Everything comes to a head in a scene where Christina, a fellow mixed-race German/Black girl, introduces Van as “Lottie’s mom” and “Earn’s girl.” When Vanessa calls Christina out on that, Christina explains that Van makes “it look good” that she’s a single mother because she “chose black” and Christina “chose white,” both in her friendships and her partner. It is an interesting conversation for many reasons. 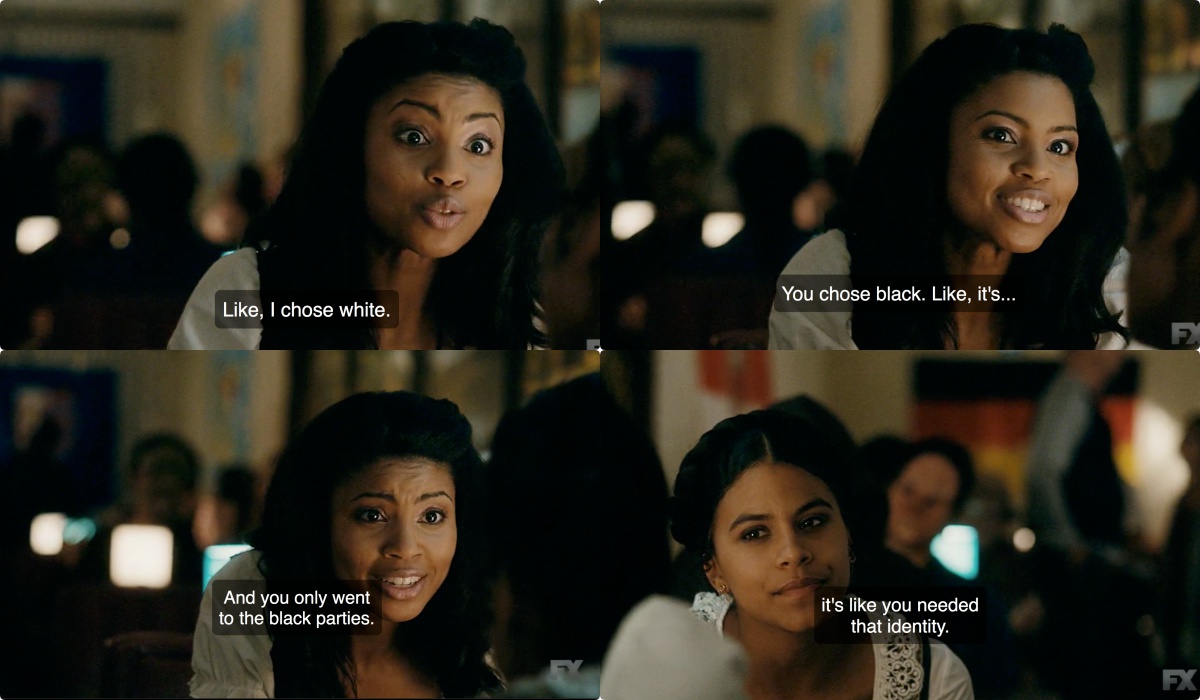 Firstly, most of the time when these conversations are happening about colorism and mixed-race identity it is framed and mixed-race black vs “full” black. Instead, we have two biracial black women talking about how they structured their lives. Usually, when these conversations happen in shows it is biracial black women VS black women. This is the first time I’ve ever seen two biracial characters discuss how they have grown up with their mixed-race identity and come out in two separate directions.

The second thing is that Christina is a darker skinned mixed-race woman. Most of the time in media biracial women are portrayed as being lighter skinned with a naturally loose curl pattern.

Finally, Vanessa is not framed as a tragic mulatto. Vanessa knows who she is and her face speaks volumes to how she’s already heard these kinds of things for years and finds it more annoying and irritating than anything else. Van is clearly proud of her German roots, she speaks the language, knows the dances and it is something she wants to share with the father of her child. At the same time, Van has never denied her blackness or attempts to stifle it. In fact, this is the first episode we’ve ever seen her not in an Afro style and her hair isn’t “straightened” like Christina, it’s in a cute braid look.

Vanessa, like many biracial women of color, occupies a liminal space that means having to navigate micro-aggressions from white family members while dealing with the internalized colorism that exists within the black community. These are important narratives to show on television and it does so without resorting to the usual tragic mulatto tropes of a “confused” identity.

When Vanessa says she didn’t choose black, it’s because she knows there was no choice in the matter. She’s a black woman, who is also proud of being half-German. White people aren’t going to look at either her or Christina and ignore their blackness in favor of their Germanness. That’s the truth Vanessa is aware of that a Christina, with her internalized hate and overall fuckery, is still not aware of.

Rarely do we have narratives about young single black mothers that allow them to be full people outside of their maternity. Despite only being in six episodes so far in the series, Vanessa always adds a necessary perspective. She’s messy, she’s flawed, she’s human.