Astronomers Discover Planet Made Out of Diamond 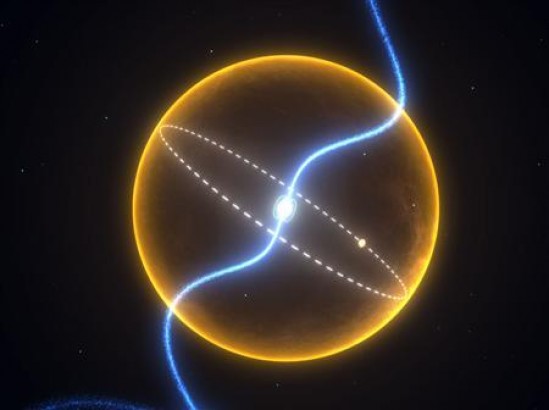 Astronomers have discovered a planet that is much denser than any other known planet and consists mainly of carbon. Due to the density, scientists calculate that the carbon must be crystalline, and thus, a significant portion of the planet would be made of diamond. The planet, about five times the size of Earth, orbits a pulsar star, which is a small (12.4 miles in diameter), dead neutron star that emits radiation as it spins hundreds of times per second. The diamond planet, which lies about 4,000 lightyears away in the constellation Serpens, orbits its pulsar star every 2 hours and 10 minutes, and measures in with slightly more mass than Jupiter, but weighs in at about 20 times as dense.

Along with the carbon, the planet is likely to have oxygen, theorized to be more abundant at the surface, and rarer toward the core, and its high density suggest that lighter elements, such as helium and hydrogen, are not present.

Matthew Bailes of Swinburne University of Technology in Melbourne had this to say:

“The evolutionary history and amazing density of the planet all suggest it is comprised of carbon — i.e. a massive diamond orbiting a neutron star every two hours in an orbit so tight it would fit inside our own Sun.”

Scientists theorize that the diamond planet is the remnants of a collapsed star that was once part of a binary star system. When the star reached the end of its life once upon a time, it expanded as a red giant and morphed into a white dwarf, at which point the rapidly spinning pulsar it orbited began to steal mass from off of the white dwarf, which is how the pulsar kept gaining speed to achieve its spinning-hundreds-of-times-per-second speed. The diamond “planet” is now all that remains of the star, still circling its pulsar partner.

As for the history of how the planet came to be, Bailes says the fate of a white dwarf depends on its mass and distance from the pulsar, so if the pulsar and dwarf are close and massive enough, they will spin together. Regarding the diamond planet, astronomers theorize that the white dwarf failed to completely merge with the pulsar, and the star lost a lot of matter and moved out to a safe distance and is no longer engaged in the fusion reactions that would drive a star, so the dead core is classified as a planet.

Now we just have to figure out how to get a team over there and collect some diamond. Check out a video explaining the discovery below.