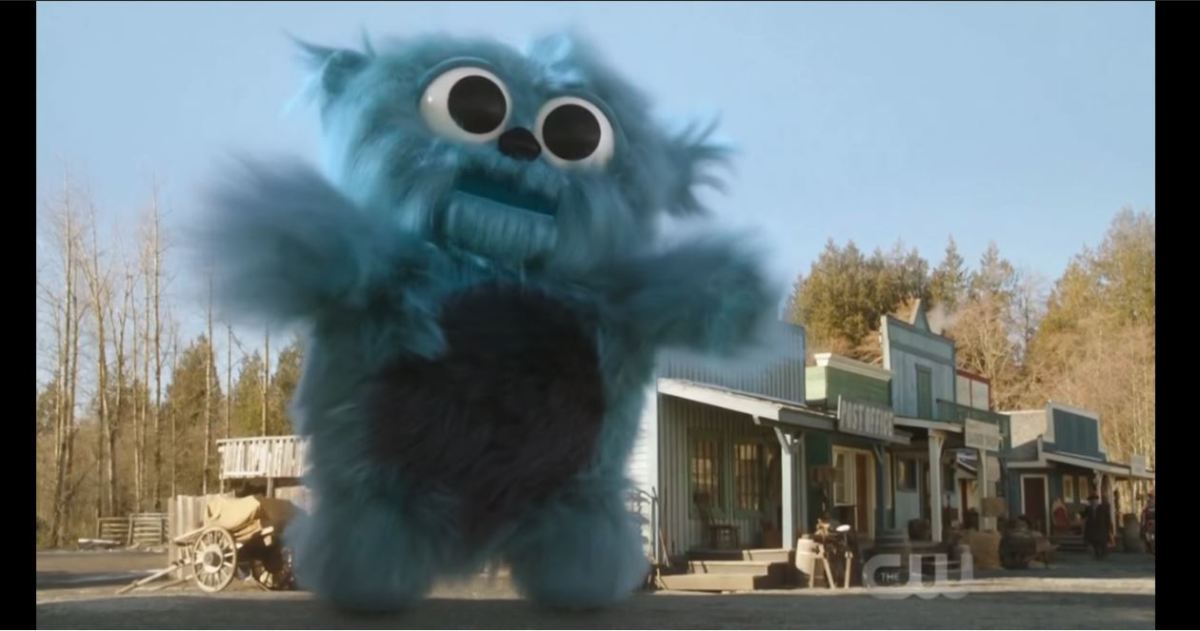 This week saw one of the weirder pop culture debates in recent memory, courtesy of The Mandalorian. Season 2 episode 2, “The Passenger,” followed Mando and the Child as they helped a frog lady transport her eggs to her husband on another planet. A running gag in the episode was baby Yoda eating the eggs, despite Mando scolding him. This led to the “eggtroversy” over baby Yoda’s actions: was it harmless snacking or unintentional genocide?

But baby Yoda is hardly the first adorably deadly critter we’ve come across. Pop culture is littered with cute and cuddly critters who are both heartwarming and heart, well, snacking I guess. Here are some of our favorite killer critters that are so cute, we’d gladly let them nibble on our faces.

There is no better cute but deadly character than Beebo from Legends of Tomorrow. Beebo himself isn’t so much a “character” as he is an idea. A dream. A way of being. Beebo was first introduced in the season three episode “Beebo, God of War” as a sort of Tickle Me Elmo knock off that got displaced in time and worshipped as a god by the Vikings. He then returned to Legends when the heroes had to become one as a personification of goodness and light … which resulted in a giant fuzzy muppet fighting a demon as the season three finale. Truly … Legendary.

My cute but deadly creature pick is Kyubey from Madoka Magica. This adorable magical girl mascot character turns out to be the main antagonist of the series, so signing his contract to become a magical girl is actually a bad thing. But what are you going to do? He is so cute, and sounds so trustworthy, and it’s all a lie.

Stitch from Lilo & Stitch, otherwise known as Experiment 626. When he was found to be too dangerous to live on an alien planet, Stitch was banished to a remote asteroid. Luckily, he escaped to Hawaii where he learned to keep his murderous tendencies on simmer and live a happy life with Lilo and her family. The thing is, even if Stitch continued to want to murder and attack, I’d probably still keep him as a pet. I love him and his determination to somehow be good and if he accidentally murdered me on that path, I’d just know he was trying his best.

Kirby! Nintendo’s Kirby is adorable, pink, squishy, and absolutely nightmarish if you think about it too hard. He runs around inhaling his enemies, swallowing them whole to absorb their powers—or regurgitating them into star-shaped projectiles. If that weren’t enough, his gaping maw has been appropriately reimagined as pure nightmare fuel over the years, perhaps the most haunting example being Lal0-90’s painting over on DeviantArt. And, if all the horrifying, toothy versions weren’t enough for you, intrepid reporters have been unable to get a straight answer on what’s up with his feet, though the theories weird us out at best.

This is Sonic’s goggles all over again, but so much weirder. Kirby is also maybe older than time and technically some kind of Eldritch horror, according to lore discussions I saw, but it was difficult to nail down a citation for that. Which is scary enough as is.

The iconic 1975 comedy Monty Python and the Holy Grail is a fount of memorable one-liners and jokes about shrubberies, swallows, and flesh wounds. But it’s the Killer Rabbit of Caerbannog that makes a truly hilarious and memorable cuddly monster. John Cleese’s Tim the Enchanter warns, “That rabbit’s got a vicious streak a mile wide!” but is laughed off by Arthur and his knights. Alas, it was no joke for poor Bors (Terry Gilliam) who is quickly decapitated by the foul beast. The killer bunny also inadvertently gifts us with one of my favorite jokes, the overlong instructions for the Holy Hand Grenade of Antioch.

Tribbles are soooo cute. You just want to hug and snuggle them while they coo and soothe all your troubles away (unless you’re a Klingon). Introduced on Star Trek the original series’ now-classic episode “The Trouble With Tribbles,” we discover that the trouble with these fuzzy balls of delight is that they’re voracious and they multiply at a ferocious clip. The small squeaking fur-bundles are native to the planet Geminorum IV, and according to Dr. McCoy, they are “born pregnant,” and seem to only exist to eat, breed, and expose secret Klingons. While they prove to be troublemakers for the Enterprise, tribbles have remained a wildly popular and perfectly adorable creature to this day. You can own your own replica! Maybe just don’t feed it …

Bronx from Gargoyles is the ultimate “can kill you, but is truly a cinnamon roll” type of critter. For some reason he’s a dog-gargoyle, but you know I think it’s Goofy vs. Pluto rules for some reason. Basically, he is the sweetest fictional pitbull in animated history and I’m sticking to it.

What’s your favorite killer critter? Let us know in the comments!