Where’s the Third Asexuality Option? The Virgin, the Workaholic, and Me 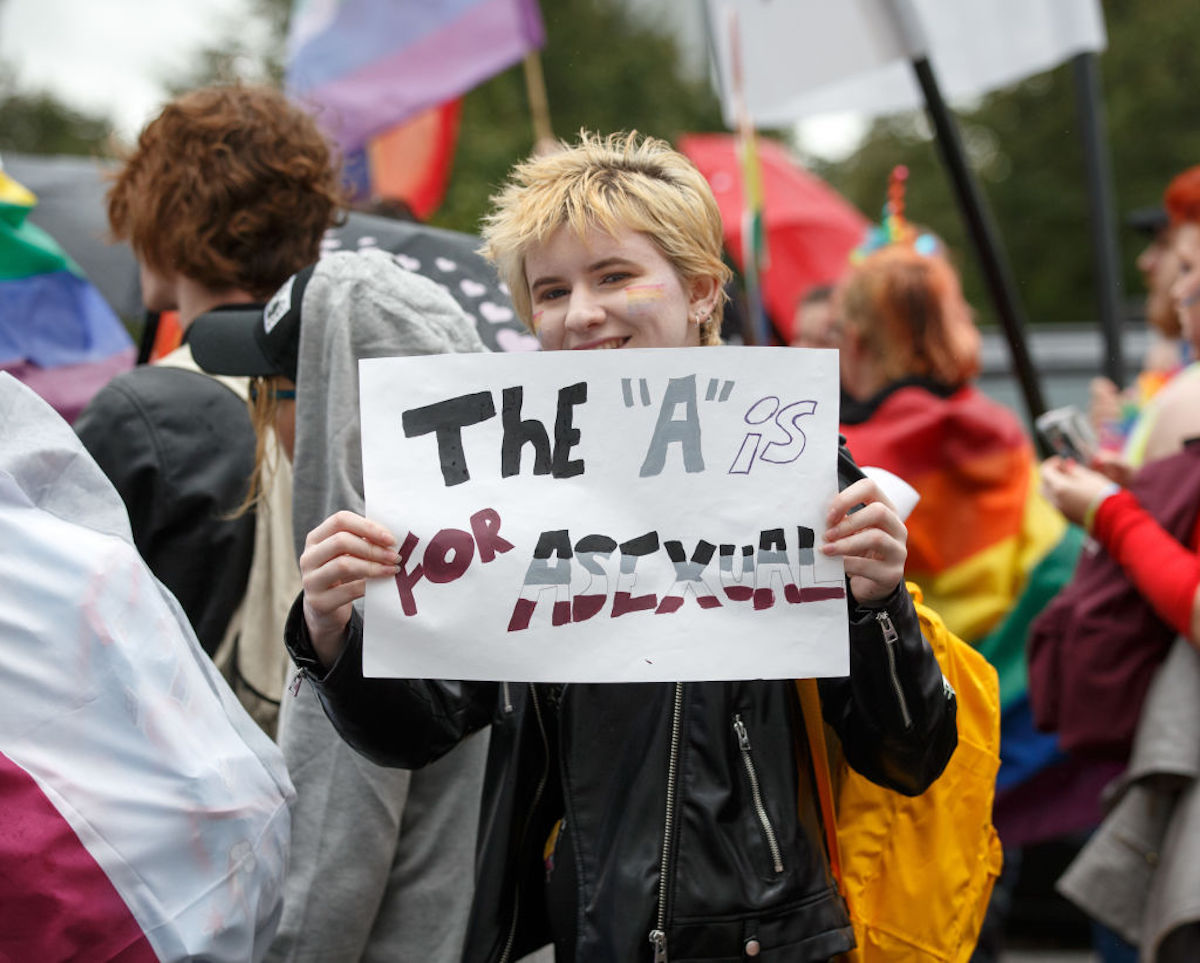 Black. Grey. White. Purple. Scrolling through Tumblr late one night my senior year of high school, I came across a post that made me sit up in bed and clutch my phone tight as I read. Someone had edited a photo of Castiel from Supernatural with what was assumedly a pride flag behind it, with the colors black, grey, white and purple, in descending order. I did not recognize it. Below the photo was a long, eloquently written almost essay explaining why the author believed Castiel to be asexual, or that he did not experience sexual attraction to others. And as I read on, I felt my eyes grow wider as over and over I thought, “Wait a minute … this is me.”

It took seventeen years of not understanding my peers’ celebrity crushes and not wanting to be on Team Edward or Team Jacob to find a word that described me other than broken. I no longer felt like I was missing something that everyone else had. Asexuality, or Ace, is a label and community for those who do not experience sexual attraction to others. Anywhere from 1-4% of the general population identify as Ace, and I had finally found that it was not something wrong with me, just who I am. I no longer felt lost, I felt found. And reading about Castiel, a character I had known and related to for years, I felt seen.

Except … I didn’t. Because no amount of evidence, however interpreted or seemingly obvious, makes Cas canonically asexual. It was never the intent of the actors or creators to represent asexuality through him. And that matters. That is not representation, that is essentially Ace-baiting.

If I were to make a list of characters creators have “Ace-baited,” or given them every characteristic of being Ace without actually explicitly writing an Ace character, they fall into one of two categories. The first is the “I just haven’t had time to have a romantic storyline because I’m too busy with the plot,” or The Workaholic.

These are the Castiels, the Katnisses, the Luke Skywalkers, even the Elsas. Sure, they don’t have a romantic interest or show any sexual attraction to anyone, but they are also a little preoccupied saving people. Or the country. Or the entire GALAXY. So, maybe they’re Ace, or maybe if they could just get some peace and quiet that would want a little something-something.

Then there’s the “Well, we haven’t seen them do it yet?” or “They just haven’t met the right person,” aka The Virgin. I mean … they’re not … not asexual? Sure they haven’t shown sexual attraction, but the writers won’t ever close and lock that door. They have to be able to throw a new love interest to try to save the show at the end of a crappy third season. Because allosexuality (feeling sexual attraction to others) is the default, they can’t be asexual, they’re just waiting for that special someone. They’re “virgins,” passive in their sexuality. As much as I would like to see myself in what is essentially any character not seen interested in having sex with others, asexuality is an active identity, not a plot device or lack thereof.

As I said before, in life, and therefore in art, sex is the norm. And I get that, don’t get me wrong. Like, I ship it. But right now, anything else is not just seen as different, but wrong. Some portrayals of asexuality on TV even go as far as to deliberately saying it is, such as House M.D. where an episode surrounds the main characters trying to prove that a patient and his wife who say they are asexual are really just a sick husband and a lying wife and in the end, they are proven correct.

When that is the primary example of asexuality and everything else is just people who want sex but haven’t had it yet, Ace folks can start to feel broken themselves. Every character we could try to identify with is just a workaholic who hasn’t found the time or the right person. Or, in the case of BBC’s Sherlock, the creator Steven Moffatt outright said it would be boring for the main character to be asexual.

Contrary to popular belief, just like any other sexuality, characters can just be asexual without needing a plotline, or hindering one. Now, asexuality can be a great arc, as seen with Todd Chavez on Netflix’s BoJack Horseman. Or in can be done subtly, as with Raphael on Freeform’s Shadowhunters. Purposely and explicitly including asexual people in your stories does not mean you are left with boring people who live boring lives. I should know. I am one.

If asexuality was more consciously represented, seen as an active identity rather than a passive lack of activity, perhaps it wouldn’t take years for Aces such as myself to realize we’re not alone. If “asexual” wasn’t treated as a bad word, it wouldn’t feel like a bad thing. I wouldn’t be scared to be loudly out and proud, knowing I would have to provide a vocabulary lesson immediately after. And I would not be constantly told, “You just haven’t found the right person!” and “You’re just busy with work.”

It is no coincidence that as LGBT representation has increased, so has social acceptance. In fact, in a 2013 survey of LGBT Americans done by the Pew Research Center, 49% of respondents felt that LGBT characters foster social acceptance. Now, as we round to 2021, it is more important than ever that all LGBTQIAP+ identities are seen, heard, represented, and accepted. Asexuality does not mean a missing piece. And the sooner creators learn that, the sooner us Aces, and the rest of the world, might too.

Emily Cole is a graduate of Simmons University with a Bachelor’s in Public Relations and Journalism and a former Disney World Cast Member. An avid fangirl and media connoisseur, when Emily is not thinking of her next article topic, she is planning for her next trip to Disney World, chatting about the latest binge-worthy show, or hanging out with her dog, Stevie. Find Emily on Twitter, TikTok, and Instagram at @emilycoleyeah.