Art Under Fascism: Overcoming Hopelessness, Making Something | The Mary Sue

Art Under Fascism: Overcoming Hopelessness and Making Something, Because it Matters 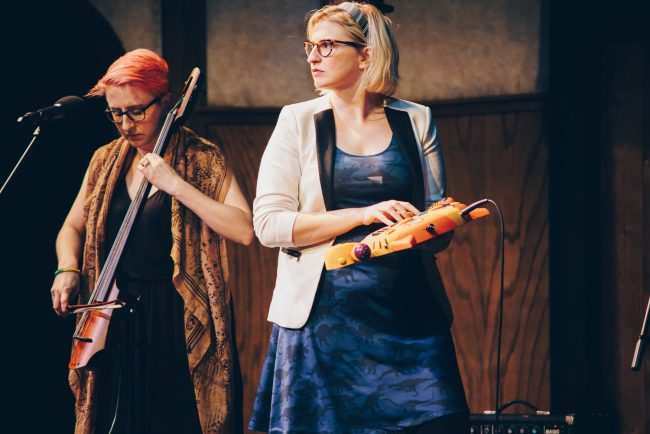 The Doubleclicks (photo by Blake Griffin)

I was supposed to get my car fixed this morning. At 8am, I should have woken up, driven to the mechanic, and taken a bus home, so that my “check tire” light would go away. But I didn’t.

Instead I stayed in bed and checked my email. Tickets for an upcoming concert are selling at a slower rate than any other show we’ve done. I consider promoting the event, and head to social media.

Today, Trump has ordered a wall built against Mexico and announced that the US will stop accepting refugees. Students from the middle east studying in the US are encouraged not to go home, as they may not be re-admitted to the US. People are sharing advice on Twitter and Facebook, along with political jokes and laments about how jokes aren’t funny anymore. I decide not to promote the show. I consider making the show a benefit, donating the proceeds to charity as we have done in the past. Then I remember after travel and a venue cut, there will likely be no proceeds unless we raise the ticket price, which I would like not to do. I consider canceling the show. That is attractive, but I won’t do it.

I scroll through Twitter, though I have constantly told myself that scrolling through Twitter is not the right thing to do. My job, my 9-5, my bread-and-butter, is writing and performing music. Like everyone else, if I don’t do my job, I don’t get to pay rent. But writing songs right now seems ridiculous. Everything seems ridiculous. Everything seems hopeless. Right? We can call our Senators, but the President still does whatever he wants. At least for the next two years, a group who feel like they have a racist, sexist, xenophobic mandate are in charge of the Federal government.

Eventually I try to propel myself forward. Not only am I not helping the world, I’m allowing myself to get broker and broker by not doing my job. That does no one any good, especially if my healthcare is going away.

Right now, at this moment, on my schedule, my job is to promote this week’s online show.

“Today I am feeling completely hopeless,” I write. “Tomorrow we will all sing together. Creation and each other are what we must not let them steal.” And then link to the blog. There you go, world. A little self-promotion and wisdom from a Portland hippie who is still in bed. You’re welcome.

And just as I’m feeling like a hypocrite, a reply.

“You’ve no idea how much I needed that right this second. Thank you, thank you…”

WHERE HOPE COMES FROM

That’s right, I remember. All of the mantras and motivational tidbits that I’ve memorized to keep myself going, are actually correct. Depression, inertia, sadness, hopelessness, they can exist, and they can also be overcome. Let’s do it.

We all need some hope right now. I need it. And the good news is, anyone who has the time and energy to do something can find their own hope. It’s not in the White House. It’s just not. And for a while, it may not even be in Congress – although telling your reps how you feel has seldom been more important. Figuring out the “best” thing to do to change the country, the situation, can be paralyzing. But doing something is possible. Just do something. Do it.

(I tell myself, stumbling to the shower.)

Yes, if ACA gets neutered, thousands will die. But you can help improve quality of life for one, two, a handful of people. Volunteer at a retirement home. Deliver meals on wheels.

No, you aren’t going to single-handedly reverse the harm our President and his people are doing to marginalized folks, the sick, the hungry, the environment. But you can make a difference. You can overcome your hopelessness and make a move. You can do it. We can do it. I can do it.

CREATING HOPE, AND A FUTURE, WITH ART

And artists? Those of us who must make something? What do we do? What is the value in music?

It’s there, and it’s real. It’s Pussy Riot, emboldening a resistance by telling truth to power, despite the consequences. But outside of jail, it’s also songs that we sing to each other to make us feel strong, to make us feel not alone, to make us feel heard, and when we have done our work for the day, to make us laugh. 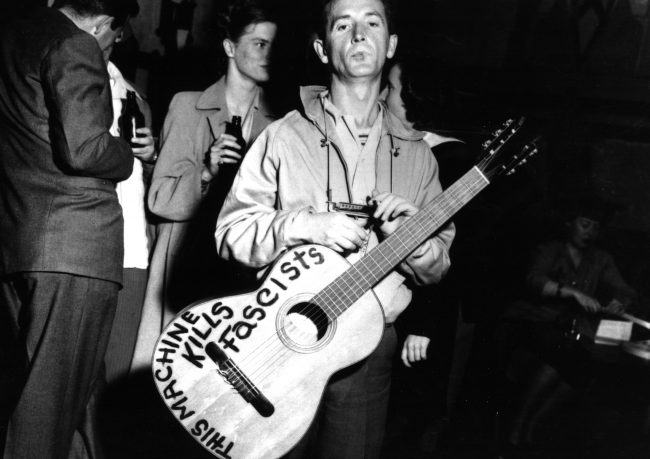 Woody Guthrie and his Fascist-killing guitar ~ 1941.

I think the most important audience for art right now are the children being raised to think that “white, straight, cis male” is the strongest group of people, folks raised to believe that racism doesn’t matter. For those people, we must make art that explains that this is not true. We must elevate artists of color. Women. And straight white men who use their platform to encourage respect, dignity, and consent. The messages learned in movies, songs, TV and visual art are not lost on kids. In the same way a kid can see themselves as a doctor, a scientist, or a President because of the representation they see in media, another can learn to love and believe in the dreams of women and minorities because they are demonstrated by those in a position of rhetorical power. Perhaps if there were more girls in cartoons in the 90’s, boys wouldn’t have immediately treated girls like me as a token sexualized object from a too-young age.

This is why art is important. This is why it matters to create consciously. To maybe cut out the world “fag” from whatever the next Animal House is so frat boys don’t think it’s “just a joke” to mock gay folks with the same words that are used to beat and kill them.

“Punk Rock is going to be great under Trump,” “The Daily Show benefits from a Republican President”—these are true things, but not good things. It is an artist’s responsibility, not a privilege, to speak truth to power.

And I should probably take my car in.

Angela M. Webber is a singer-songwriter, comedian and writer, known for her nerd-feminist-folk-sister duo, The Doubleclicks.