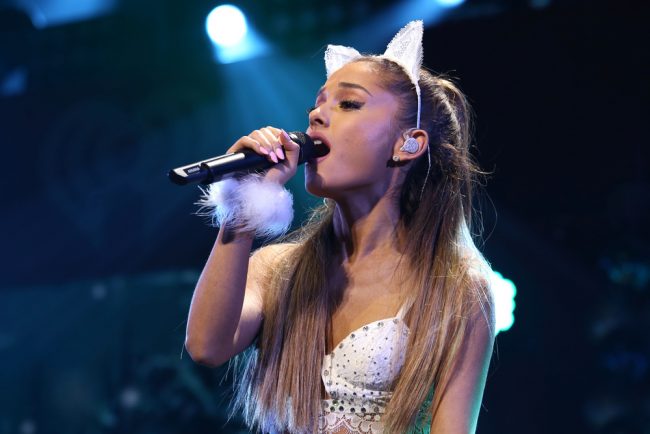 There are a lot of things that might pop into your head when you hear the name Ariana Grande: her songs, her Nickelodeon days, a certain donut incident… But it’s mystifying as to why “Young Feminist Icon” isn’t also an instant association.

Grande–whose last album and upcoming tour are titled Dangerous Woman–has a solid history of not keeping her feminist beliefs to herself, usually in regard to the double standard men and women face in the ways their sexuality is viewed. She’s posted essays to Twitter and discussed the hypocrisy in interviews. Earlier this year, in response to some tweets a British radio station made praising some male artists for showing skin and condemning her for doing the same, she told Billboard,

“If you’re going to rave about how sexy a male artist looks with his shirt off, and a woman decides to get in her panties or show her boobies for a photo shoot, she needs to be treated with the same awe and admiration. I will say it until I’m an old-ass lady with my tits out at Whole Foods. I’ll be in the produce aisle, naked at 95, with a sensible ponytail, one strand of hair left on my head and a Chanel bow. Mark my words. See you there with my 95 dogs.”

Ariana Grande has long made her frustration with society’s double standards known. When a woman gets criticized for expressing her sexuality or showing her body, it always seems to go hand in hand with the appropriation of her sexuality by others. Sexual autonomy is frowned upon; the only female eroticism many people feel comfortable with is when it takes the form of outside objectification. And that’s what Grande describes in an essay she posted on Twitter on Tuesday night.

She describes her experience earlier that night, when a fan began fawning over her boyfriend, rapper Mac Miller. As part of his fanboying, he told Miller that Ariana is “sexy as hell” and that the fan sees him “hitting that.” He said this IN FRONT OF ARIANA.

For anyone going the “but that’s a compliment!” route, I’ll let Ariana describe why that doesn’t matter, not one bit.

This might not seem like a big deal to some of you but I felt sick and objectified… Things like [that] happen all the time are the kinds of moments that contribute to women’s sense of fear and inadequacy. I am not a piece of meat that a man gets to utilize for his pleasure.

Grande (an “adult human being” as she heartbreakingly feels the need to remind the world) has an important point here that doesn’t get nearly enough attention. Whether she’s a wildly successful musician or a regular non-famous young woman, she is not a “piece of meat” and she is not a prize. Her “hotness” and physical access to her body are not things that her boyfriend has earned through his career, by way of being awesome, as this fan seemed to think.

If only this one fan were just one man, rather than representing a persistent, pervasive view of women and girls. Grande goes on in her message above to make that clear: these are not simply individual experiences. They are shared common (and constant) experiences, as well as systemic problems. And we need to talk about them so we don’t feel so alone when they happen to us:

“We need to talk about these moments openly because they are harmful and they live on inside of us as shame. We need to share and be vocal when something makes us feel uncomfortable because if we don’t, it will just continue. We are not objects or prizes. We are QUEENS.”

I think I just became an Ariana Grande fan.

(via Mediaite, image via Shutterstock)