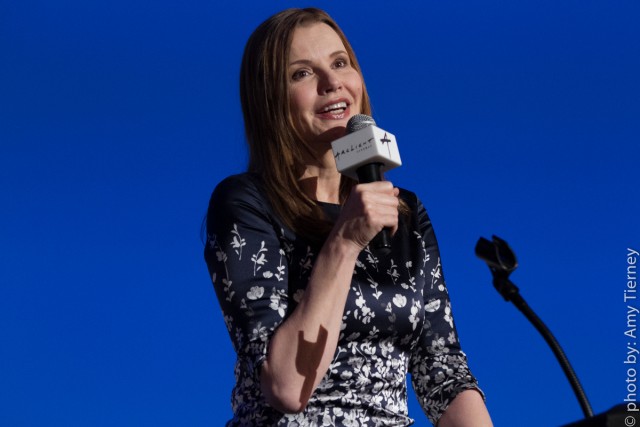 ArcLight Cinemas, partnering with Women in Film and the Geena Davis Institute on Gender in Media, hosted the first annual Women in Entertainment Summit last week, which provided a day-long event full of insight and information about what’s holding women back in the entertainment industry, and what can be done to help them move forward.

I had the pleasure of attending this event, which featured amazing women from all areas of entertainment – actor and activist, Geena Davis herself gave a Keynote Address; women like director Catherine Hardwicke (Twilight) and writer Wendy Calhoun (Empire) appeared on panels discussing an array of topics; and women like Deborah Snyder (who’s produced tons of geek fare like 300 and the upcoming Batman v Superman) and Meredith Walker from Amy Poehler’s Smart Girls did “Fireside Chats” where they gave us an in-depth look at their work and what they’re doing to challenge the status quo for women.

There were two central themes that seemed to permeate the event: the idea of unconscious bias (specifically that men aren’t being malicious in Hollywood, they’re just stuck in a pattern they don’t even realize exists until it’s shown to them with hard data), and the fact that allowing women to create and work in the entertainment industry, as well as creating content that appeals to women just makes good business sense. As Tiffany Smith-Anoa’i of CBS Diversity said during a panel, “Diversity is not ‘the right thing to do,’ it makes business sense. It makes dollars.” 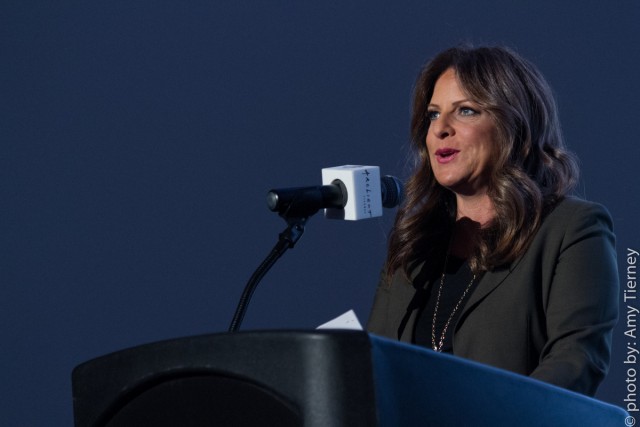 There was a lot of bandying about of numbers and statistics to show how bad things have gotten. In her Keynote Speech, Women In Film’s Cathy Schulman went in-depth into the recent three-year study they did along with the Sundance Institute to examine the gender discrepancy among Hollywood directors. Geena Davis (in a speech that was as hilarious as it was informative) discussed a lot of the discouraging facts and figures regarding women in the entertainment industry, that actually haven’t changed much in seventy-five years!

However, the really wonderful thing about the event was how inspiring it was, and that all of these women were coming together in hope, and with the knowledge that there are concrete things everyone can do to move themselves and other women forward in the industry.

In fact, Schulman mentioned how Women in Film is taking concrete steps based on their study. She talked about the Four Conversion Points to which WIF is now devoting resources:

Gretchen McCourt, Executive Vice President of Cinema Programming for Pacific Theaters (which owns ArcLight Cinemas) made the pledge that she was making gender parity a priority at her theaters, and will be making the conscious effort to seek out films created by and starring women for screening at her theaters, always aiming for 50% of the films screened.

In a panel called “Role Play,” Scandal costume designer, Lyn Paolo stressed the importance of mentorship and women needing to support each other. This was echoed by Susan Cartsonis of Storefront Pictures, who said that despite their fear, women need to come from a place of abundance, and act like there’s room for all women to succeed – because there is. For her part, Cartsonis is starting a media fund through Storefront to empower women through entrepreneurship and financing. 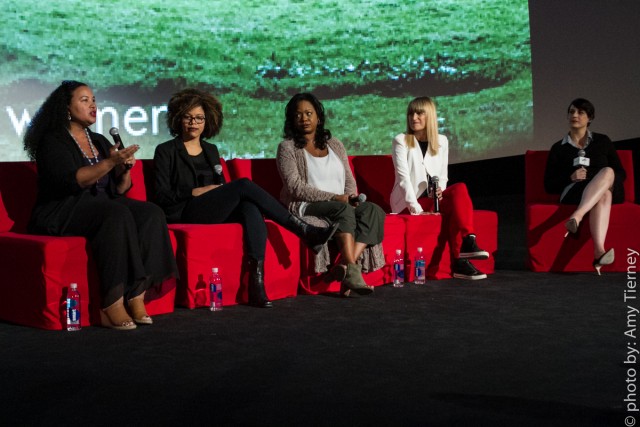 The next panel, called “Gender and Equality,” focused on how to level the playing field by being the voice in the room that raises questions about diversity. Wendy Calhoun said “I make it a point to know female creators and women of color. I make it part of my job,” suggesting that white and/or male writers should advocate for women and people of color in the same way. She then told the story of a young woman named Danika, whom she met when Danika was a writer’s assistant, and through Calhoun’s mentorship ended up writing an episode of Empire years later. Catherine Hardwicke said that if we’re in a room where decisions are being made, we need to be the voice in the room that raises the diversity questions. She talked about men’s unconscious bias, and how most of the time, it isn’t that they’re being malicious when they cast or hire mostly men – it’s that no one’s ever asked them to stop and think about it. Calhoun said that what’s helped her the most in a television writing room is going in armed with information. Have information on real-life prototypes for diverse characters so that if, for example, you want the bootlegger in the piece to be female and someone says “that’s not historically accurate,” you can tell them about Jennie Justo.

However, Tiffany Smith-Anoa’i of CBS Diversity made a point that resonated with everyone and that they all repeated enthusiastically. If you really want to see women and people of color doing the things you think they should be doing on screen, “create your own shit” and make them come to you instead of you begging them for a seat at the table. She also emphasized that diversity “isn’t just ‘black.” Diversity is about women, people of diverse ages, body types, LGBTQ+ representation, representations of disabilities, or of people living with mental health issues, and to keep that in mind even if you’re a member of one of those groups, because we all have to help each other.  And Calhoun dismissed the notion that women should only be hired to write “women’s stories,” because “I would not have a career if I didn’t know how to write white men. If I didn’t know how to tell white male fantasies, I wouldn’t have a job.” 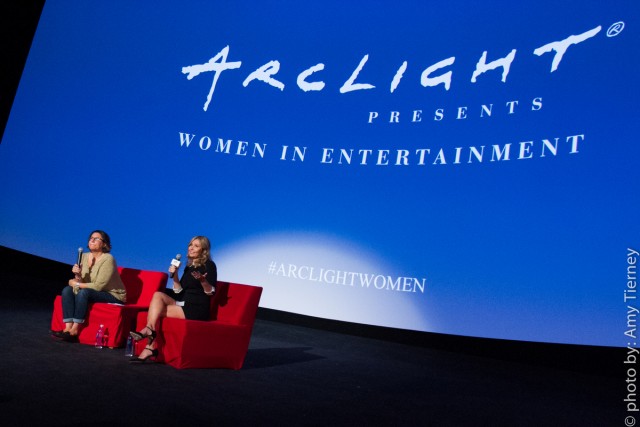 In her Fireside Chat interview, producer Deborah Snyder talked about the importance of making “deliberate choices.” She recounted producing 300, and how she was directly responsible for increasing Gorgo’s role (played by Lena Heady) in the film, despite her having, like, two panels in the 300 graphic novel. (Thanks, Frank Miller!) She raised the point that, historically, women in Sparta were actually very outspoken, and Gorgo would’ve been way more involved in the goings-on of the story. So, she not only did it because she wanted to increase female visibility, but also because it was more historically correct. She made the deliberate choice to hire a female director for Wonder Woman, and to hire more female crew on the Justice League movie, which now has a female First A.D. and a female stunt coordinator. There was a lot of discussion about how young girls need to see futures for themselves in the film industry, otherwise they’ll never know that they can aspire to such things. To that end, an audience member mentioned the PrimeTime for Schools initiative of the Sherry Lansing Foundation which, among other things, sends women in the industry to talk to high school students about what they do. 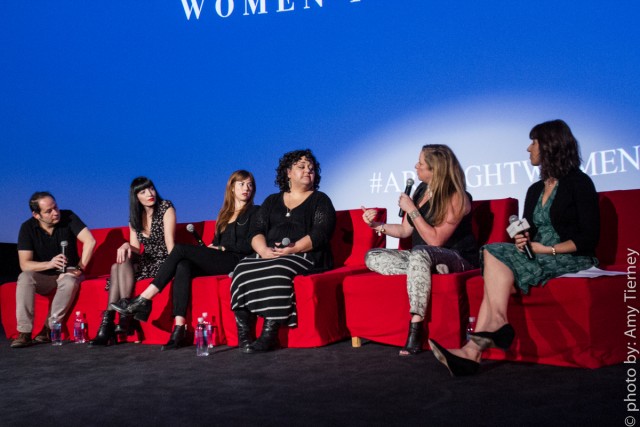 There were also just some badass, inspiring women on these panels who were just natural examples of what it means to be a feminist in the industry. Case in point: Kassidy Brown and Allison Rapson of We are the XX, “a female founded media company that creates content that exposes the world we live in — a world that is, in fact, 50% female and unapologetically so.” They are creating amazing content, helping other women do the same, and being bold about the fact that “you can’t have ‘reverse sexism’ until you have parity.” Their documentary series, A Woman’s Place, is available over at Refinery 29.

Attending this event was invigorating, and while the price point (tix were $100) was a bit steep for many up-and-coming female filmmakers, the discussion throughout the event was focused on making Hollywood more accessible to these women, and the women on these panels, who already have a certain degree of power, are making that access a conscious and informed priority, which can only benefit any of us who want to tell and share our stories through film, television, and new media.