'Archive of Our Own' Users Are Hugo Winners | The Mary Sue 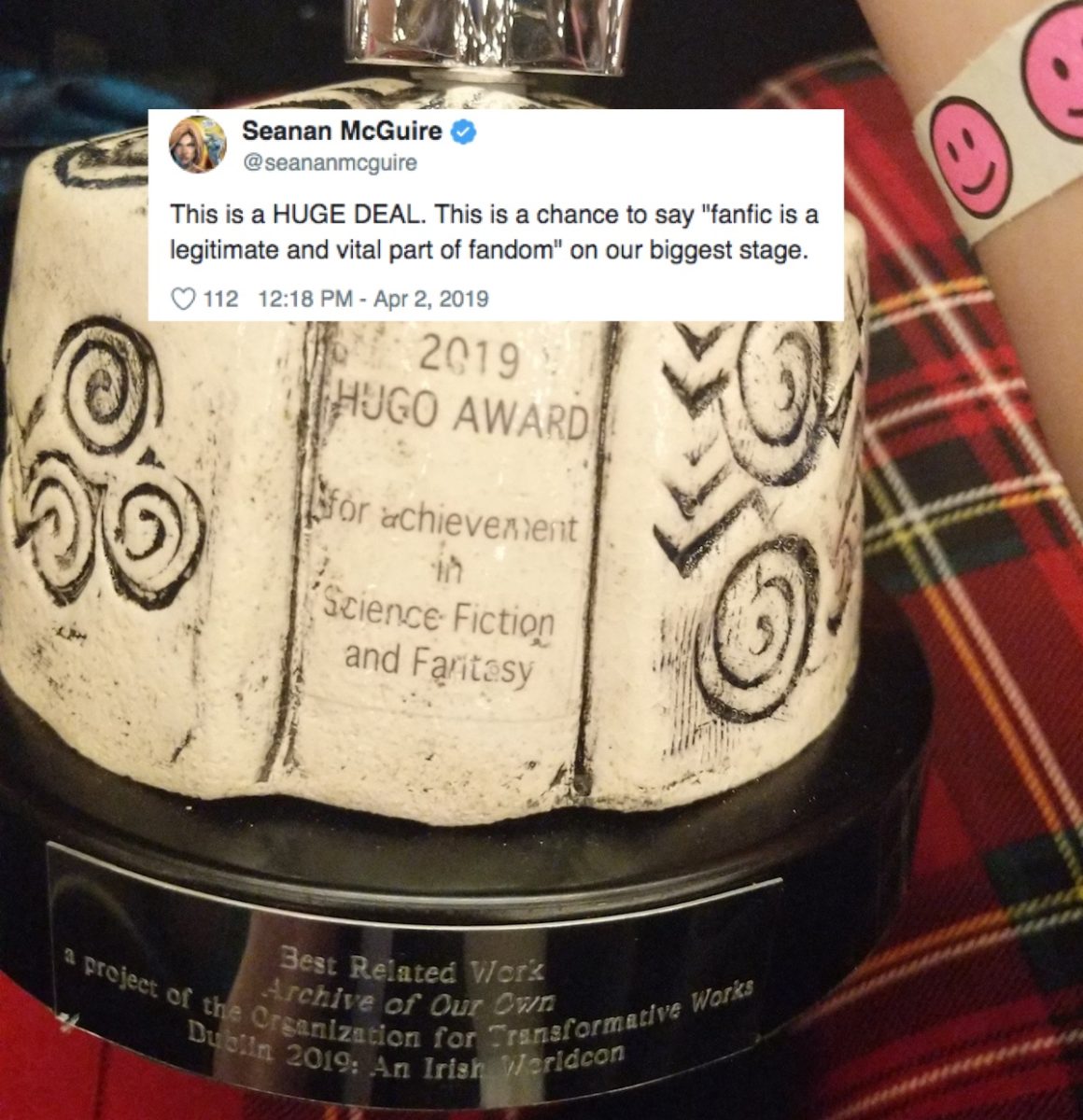 2019 will be remembered as the year that fanfiction mothership Archive of Our Own won a Hugo Award. If you have ever contributed a fanwork to the site, you’re a part of this.

Many talented people won at the 2019 Hugos at WorldCon in Dublin. Mary Robinette Kowal’s The Calculating Stars won for Best Novel; Becky Chambers’ Wayfarers won Best Series; Spider-Man: Into the Spider-Verse won for Best Dramatic long form presentation, and The Good Place for short form; the iconic Charles Vess waltzed off with Best Artist; my old editors Annalee Newitz and Charlie Jane Anders scored Best Fancast for their podcast Our Opinions Are Correct; Jeannette Ng won the John W. Campbell Award for Best New Writer and promptly launched into her speech by proclaiming that John Campbell was a fascist. (Here’s Ng’s speech.) It was, on the whole, a glorious night.

But what set Tumblr, Twitter, Discord, and text chats alight across the world was the news that Archive of Our Own won the Hugo for Best Related Fanwork. This was the Archive’s first time being nominated, news initially treated as somewhat contentious by those who still don’t want to try and understand the vital, ever-growing, incredibly rich and variegated culture of fan-created work. (Our friends at Uncanny Magazine, who walked away with the 2019 Hugo for Best Semiprozine, recently wrote a piece for The Mary Sue about why their magazine wouldn’t exist without fanfiction.)

Archive of Our Own’s win felt like a real victory for millions of us who write and create fanart, videos, podfic, meta essays, and more. It sure is nice to have that shiny rocket statue and acknowledgment from one of the most prestigious award-giving bodies in genre fiction that we are here and crafting wondrous things.

Author Naomi Novik (also nominated for Best Novel for Spinning Silver that night), a founding member of Archive of Our Own, or “AO3,” accepted the award with a speech that meant a whole lot to a whole lot of us. Here’s the full text of Novik’s speech, via The Organization for Transformative Works, which oversees AO3:

All fanwork, from fanfic to vids to fanart to podfic, centers the idea that art happens not in isolation but in community. And that is true of the AO3 itself. We’re up here accepting, but only on behalf of literally thousands of volunteers and millions of users, all of whom have come together and built this thriving home for fandom, a nonprofit and non-commercial community space built entirely by volunteer labor and user donations, on the principle that we needed a place of our own that was not out to exploit its users but to serve them.

Even if I listed every founder, every builder, every tireless support staff member and translator and tag wrangler, if I named every last donor, all our hard work and contributions would mean nothing without the work of the fan creators who share their work freely with other fans, and the fans who read their stories and view their art and comment and share bookmarks and give kudos to encourage them and nourish the community in their turn.

This Hugo will be joining the traveling exhibition that goes to each Worldcon, because it belongs to all of us. I would like to ask that we raise the lights and for all of you who feel a part of our community stand up for a moment and share in this with us.

In recent years, fanfiction has become more mainstream in a way that would have astounded me when I first started reading and writing it as a teenager. AO3’s ascendance is a large part of this seachange. Creatives and stars address fic on social media and at conventions. Previous opponents have retracted their stance; I even heard Anne Rice, the oldest foe, say at NYCC that while she couldn’t read fic of her work for legal reasons, she was no longer against it. More and more published authors of “original” fiction are now proudly stating that they came out of fanfiction; many published “original” works these days are adapted from stories first shared on sites like AO3 and Wattpad. Acclaimed figures like Novik continue to write fanfiction and produce fanworks alongside their other work. I’ve been a guest at Novik’s yearly Yuletide fic-writing party, a joyous celebration of people rushing to finish their prompts before time runs out, around sips of holiday punch.

If you’re the sort who likes to insist that you don’t understand fanworks and won’t have any part in them, that’s fine. I’m not here to convince you. There are dozens of articles on the merits of participating in a vibrant, diverse community of fellow fans and creators working for ourselves. Today I’m here to celebrate the accomplishment of AO3, its thousands of volunteers who wrangle every corner of it into order, and the millions of people whose love and creative energy contributed to the makings of a site that is now award-winning. There are a lot of us—the Worldcon auditorium alone proved it.

Best Related Work is… unsurprisingly… Archive of Our Own!! “Art happens not in isolation, but in community”, and what a great tribute to that this is! They raise the lights and ask community members to share this win with them!#Dublin2019 #Worldcon2019 #Worldcon #HugoAwards pic.twitter.com/ZrXvO2Estr

Also Naomi Novik asked everyone who felt like a part of the Ao3 community to stand up and said it was our award too and there were so many of us and it was very emotional.

CONGRATS to Archive of Our Own for winning a Hugo Award! Exciting & well deserved! I wrote this @Slate piece after the nom about how this recognition is a triumph for both diversity in science fiction AND diversity in technology development. #HugoAwards https://t.co/FcbrGEu5ml

Archive of our Own, thank you, and congratulations. ❤️ pic.twitter.com/NPyuMTsYe1

Make no mistake about it, this is a big deal, not just to those of us excitedly texting each other that we plan to add “Hugo Award Winner” to our bios. As Aja Romano at Vox notes in an essay on AO3’s win and its founding history, “Hugo members have never nominated unpublished fanfiction before. But now the Hugo voters have sent the emphatic message that not only does an entire fanfiction archive constitute a single ‘related work,’ but that work is worthy of standing alongside some of the most renowned sci-fi/fantasy authors around.”

AO3’s Hugo Award is a triumph for fandom and a well-deserved recognition of the hard work that goes into every element of maintaining and forwarding an inclusive, non-profit, entirely for-fans-by-fans space. There’s never been anything like AO3 before, and this award will only help it continue to grow and expand. More than five million stories and fanworks have been published on Archive of Our Own since its founding in 2009. Only imagine where we’ll be in 2029; I for one can’t wait for the holodeck version of 2329.

finally, a Hugo of our own.

Are you a Hugo Award winner this year? Let’s shine our statue in the comments.