But when does it cross over with Saga? 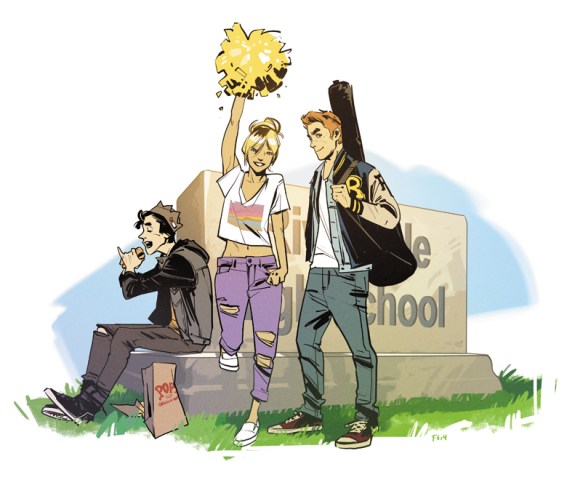 2015 marks the 75th anniversary of Archie Comics, but the company is following up a series of bold and unexpected moves with something that’d be entirely normal at certain other comics companies we could name… it’s restarting and renumbering its flagship series with a brand new, acclaimed writer/artist team.

Archie Comics has come a long way over the past few years from the check-out-line comics that I stopped asking my mom to buy for me right around the time that I stopped reading Disney Adventures. They introduced disabled, brown, and, most famously, gay teens to Riverdale; they started up and successfully continued two future parallel universes to explore the adult troubles of the Archie gang in a world where Archie married either Betty or Veronica; and they’ve got an ongoing series about what happens when the zombie apocalypse hits Riverdale, written and drawn by artists best known for teen television, pulp adventure, and noir heroes.

It seems ironic, in a year when both of the Big Two of American comics publishing are pinning their big maxi-events on reader nostalgia for old story arcs, that Archie Comics is celebrating its 75th anniversary by telling an entirely new story with a “new direction:”

ARCHIE #1, hitting next year from writer Mark Waid and artist Fiona Staples, will reenergize the story of Archie and his friends, presenting for the first time ever the origins of everyone’s favorite redheaded teen and his friends while showcasing the beginnings of the historic love triangle between Archie, Betty and Veronica.

The new series will focus on the strengths of the popular characters, their world and harken back to the comic’s humorous and edgier roots, said Archie Comics Publisher/CEO Jon Goldwater.

That said, Goldwater stressed that this isn’t a total revamp of the concept. But he acknowledged that Archie Comics have less “bite” now than they did in the 1940s, and that the idea is to grab some modern comics artists who can bring a modern sensibility to the series without losing the “all-ages appeal.” And, undoubtedly, to give the company a flagship all-ages series with an updated visual style to catch the eye of readers. Life With Archie may have dealt with issues like franchises squeezing out the mom-and-pop store, dissolving marriages, and the life of an adult struggling artist, but panel to panel it shared the style of any other Archie comic. Artist Fiona Staples is no stranger to the company, having produced beautiful variant covers for a number of Archie Comics in the past few years; and Mark Waid is no stranger to the question of whether a decades old comic property can be modernized without losing its original appeal.

What more could an Archie fan ask for the 75th anniversary? Additional ongoing titles that will build on Waid and Staples new series while retaining the classic Archie art style? How about a hour-long drama premiering on Fox that’s been described as “Archie meets Twin Peaks?” A line of Archie-inspired menswear from Marc Eckō?  Well, you’re getting all of that. It’s a brave new world, Archie Comics fans. Try to enjoy it.