Comfort the Archaeopteryx: Dinosaur-Like Birds May Downgrade Him to a Bird-Like Dinosaur

The Archaeopteryx has a reputation as being the missing link between dinosaurs and birds (the kind of thing that Dr. Grant probably was very excited about). The famous 150 million-year-old fossil was unearthed 150 years ago, only two years after the publication of On the Origin of Species, and since then has been used as a very clear and obvious example of fossil evidence of the evolutionary transition between what we consider discrete species.

But newly discovered fossil evidence of a species called Xiaotingia may be the evidence of feathered dinosaurs and early birds that breakes the camel’s back… so to speak. It’s not just that Archaeopteryx may actually be on the more dinosaur-y end of the spectrum than ever, it’s that it might not belong on the spectrum in the first place.

“It may seem heretical to say that Archaeopteryx isn’t a bird, but this idea has surfaced occasionally since as far back as the 1940s,” said paleontologist Lawrence Witmer of Ohio University in a commentary accompanying the finding. “Perhaps the time has come to finally accept that Archaeopteryx was just another small, feathered, bird-like theropod fluttering around in the Jurassic.”

Xiaotingia was found in the fossil beds of China’s Liaoning Province, and when researchers plugged its traits and age into their models of the evolutionary tree, the found that the Archaeopteryx was no longer on a “trunk” leading to the evolution of birds, but rather branched off into some feathered dinosaurs that did not ultimately evolve into anything other than feathered dinosaurs.

New discoveries like this are always have the possibility of shaking some leaves off the taxonomic tree, but that goes both ways. So if you’re interested in restoring Archeopteryx as a stepping stone on the path to birds, get digging. 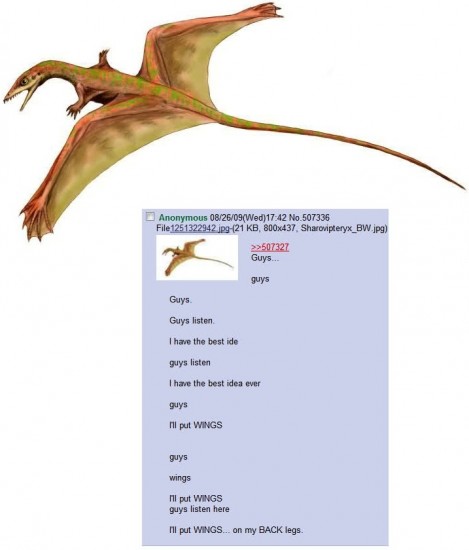