Hmm: Why Is Apple Having An “Event” On January 27th? 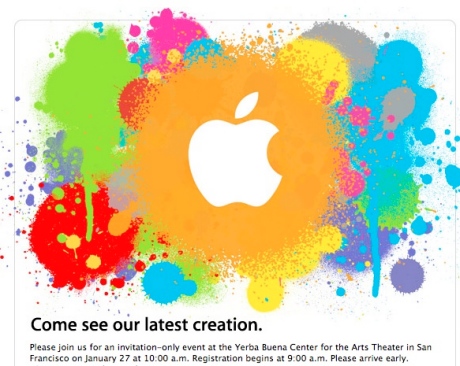 If Apple’s goal with this recently-released press invite for an event on January 27th was to whip the tech press into a frenzy: well, it worked. What does “come see our latest creation” mean? Do the paint splatters hint at artistic applications? Why should members of the press “please arrive early?” Aargh!From Gizmodo:

Let’s take a closer look at the invite, which is, again, to “come see our latest creation.” Using the word “creation” is telling in both its vagueness and its specificity: It says it’s something new. Apple likes playing with words, too—remember the “something’s in the air” tagline for the event they introduced the MacBook Air, their latest truly new product?

At the same time, it’s interestingly far less weighty than the tagline for the Macworld where Apple introduced the iPhone, which indicated that it would be the beginning of something huge: “The first 30 years were just the beginning.” It’s a light and fluffy blurb…