We never know with you, Apple. We just never know. 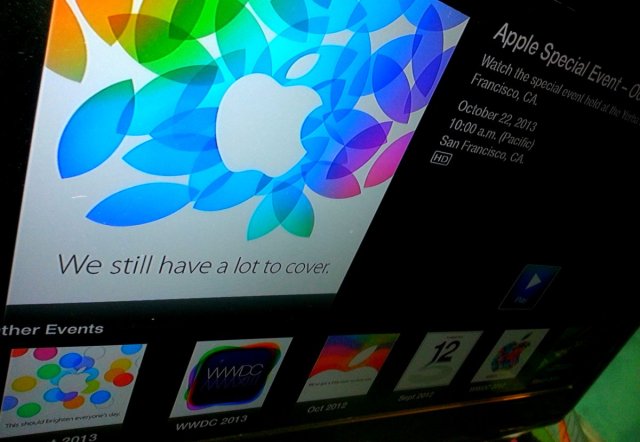 We were left wanting for a live stream during Apple’s big iPhone 5S/5C announcement last month, but it seems today we’ll actually get one for the iPad announcement. Apple TV owners should already have a channel for the event, and we expect Apple will host it on their site and other devices as well.

[Update: 12:00PM EDT] The Apple Events page lists today’s event, though it’s still too early to expect the stream to be live, it’s a good indicator that we’ll be able to watch on more devices than just Apple TV.

Unlike the iPhone 5S event, it seems promising that we’ll get to watch this one live — at least on the Apple TV. We’ll also be checking the Apple Events page for an update with the stream, but that hasn’t happenedyet. If the stream is embeddable, we’ll post it here.

The accepted rumors as reported by The Verge  for what we can expect to see today seem to be a full sized iPad with a body a bit more like the iPad mini, and an iPad mini with a “retina display”. Both are expected to get an upgrade to 64-bit chip sets similar to those we saw in the iPhone 5S announcement.

There’s less definite speculation about possible newer models like a slightly larger version, or a cheaper iPad mini to compete with less expensive tablets. With the incredible iWatch design GIF that was making the rounds yesterday and Samsung’s Galaxy Gear it could be about time Apple makes a smartwatch announcement of their own.

Besides missing out on the actual iPhone 5S announcement event last month, we also missed out on the Elvis Costello performance at the end. Any guesses as to who they’ll have today?

(via MacRumors, image via photo of Apple TV)