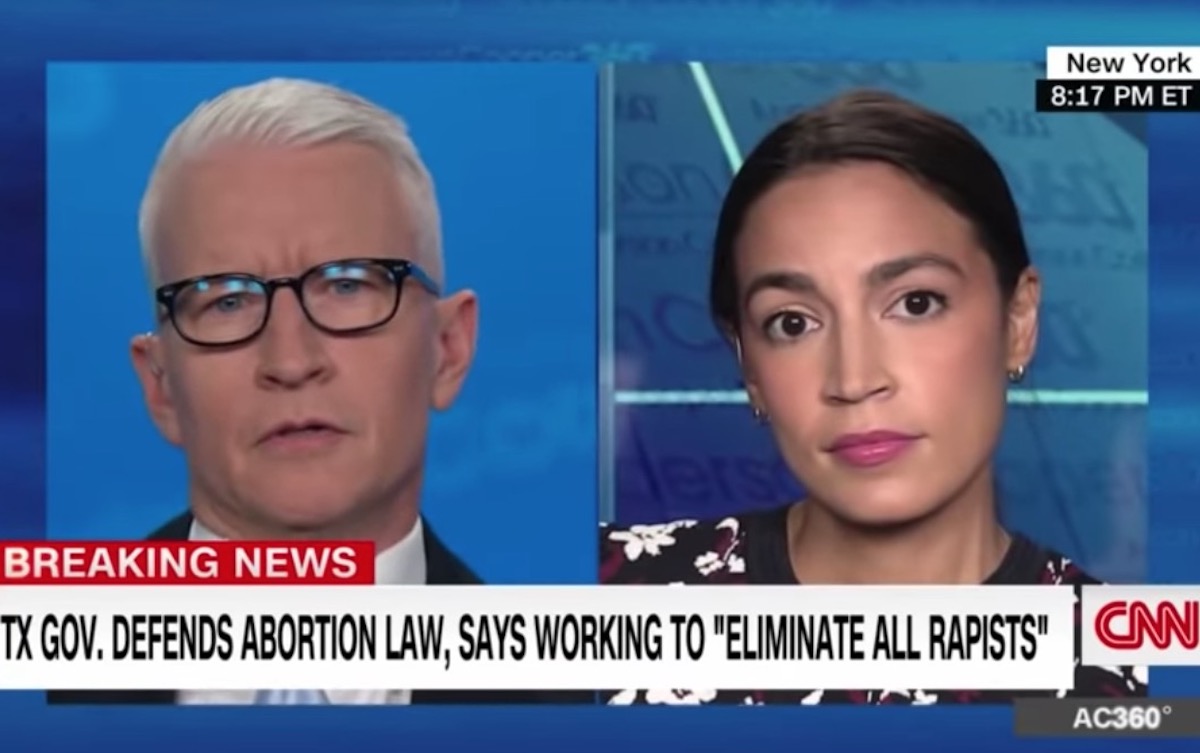 Yesterday, Texas Governor Greg Abbott made it publicly known that he has a fundamental misunderstanding of both pregnancy and menstrual cycles, as well as the experience of rape survivors.

During a press conference Tuesday, Abbott explained that the state’s new six-week abortion ban does not have an exemption for victims of rape or incest because, as he sees it, six weeks is plenty of time to get an abortion. By way of consolation, he said that he is simply going to “eliminate all rapists from the streets of Texas.”

New York Congresswoman Alexandria Ocasio-Cortez appeared on CNN Tuesday night to explain why none of Abbot’s words mean anything.

She starts off by telling host Anderson Cooper she finds Abbott’s comments “disgusting,” which obviously they are. “He speaks from such a place of deep ignorance,” she says. “And it’s not just ignorance. It’s ignorance that’s hurting people.”

“I’m sorry we have to break down Biology 101 on national television,” AOC says, “but in case no one has informed [Abbott] before in his life, ‘six weeks pregnant’ means two weeks late for your period.” Because once again, that timer starts not at conception, but on the first day of a person’s last period.

“Two weeks late on your period for any person with a menstrual cycle can happen if you’re stressed, if your diet changes, or for really no reason at all,” Ocasio-Cortex explains. “So you don’t have six weeks.”

“He speaks from such a place of deep ignorance, and it’s not just ignorance. It’s ignorance that’s hurting people.”

Next, the Congresswoman takes on Abbott’s ludicrous claim that Texas is going to end rape. First, she takes issue with the ignorance on display with his specific choice of language when he said he would get rapists “off the streets.”

“The majority of people who are raped and who are sexually assaulted are assaulted by someone that they know,” she says. “These aren’t just predators that are walking around the streets at night. They are people’s uncles, they are teachers, they are family friends, and when something like that happens, it takes a very long time, first of all, for any victim to come forward. And second of all, when a victim comes forward, they don’t necessarily want to bring their case into the carceral system.”

A person’s idea of justice might not involve seeing their rapist incarcerated. Or maybe they don’t want to go through the traumatizing experience of a trial or even just talking to police in the first place.

Ocasio-Cortez goes on to tear into the unrealistic idea that we can “end rape” without first dismantling the same sort of rape culture and culture of misogyny that feeds into legislation exactly like this anti-abortion Texas law—especially when, statistically we know that there are men making these laws who themselves are perpetrators of sexual assault.

When Cooper asks her to explain what she means with the connection between rape culture and this kind of legislation, AOC starts with the obvious: that anti-abortion laws have nothing to do with being “pro-life” because anti-abortion legislators do nothing to actually support life or living people.

“None of this is about life, none of this is about supporting life,” she says. “What this is about is controlling women’s bodies and controlling people who are not cisgender men. This is about making sure that someone like me as a woman or any menstruating person in this country cannot make decisions over their own body, and people like Governor Abbott and Mitch McConnell want to have more control over a woman’s body, than that woman or that person has over themselves.”

“What that shares with rape culture is that sexual assault is about the abuse of power, and sexual assault is about asserting control over another person,” AOC explains. “And the ease with which these men seek to do that to other people is atrocious. It is morally reprehensible, and they cannot even begin to understand the agonizing decisions that people have to make, including in cases of miscarriage, rape, and incest.”

Sexual assault is an abuse of power that attempts to seize sexual control over another person’s body.

Anti-choice laws are also an abuse of power that attempts to seize sexual control over people’s bodies en masse.

If people like Greg Abbott cared about facts, this should be enough to convince him to change his argument—to admit that no, six weeks is not enough time for a pregnant person to get an abortion. But he clearly doesn’t care about facts.

This was a ridiculously flimsy argument to begin with, and it’s likely Abbott always knew better. It’s pretty clear he doesn’t care about facts or about being wrong, as long as he reaches the end goal of obtaining as much power over our bodies and our lives as possible.