13th Warrior Is the Best Beowulf Adaptation | The Mary Sue There are some movies that stay with you, and for me, one such movie is 1999’s The 13th Warrior. The Antonio Bandera vehicle hit theaters in the later summer of 1999, and opened in second place at the box office behind a little movie called The Sixth Sense. While the film eventually went on to take in $67 million, it wasn’t a big hit, and it’s not terribly well-known now. And that’s a shame, because The 13th Warrior isn’t just a great movie, it’s a great adaptation of a notoriously hard to adapt tale: Beowulf.

Before we get into this, yes, here’s a spoiler warning for a 21-year-old movie and also the thousand-year-old Beowulf. Can’s be too careful.

Beowulf, which you might remember from high school or college, is the most important complete work of Old English that survives. No one knows how old the poem, is but the manuscript that contains it is over 1,000 years old, and tells the tale of a hero by the name of Beowulf in Scandanavia who aids a kingdom under siege by a monster called Grendel. He defeats Grendel, then Grendel’s mother, and years later, a dragon. 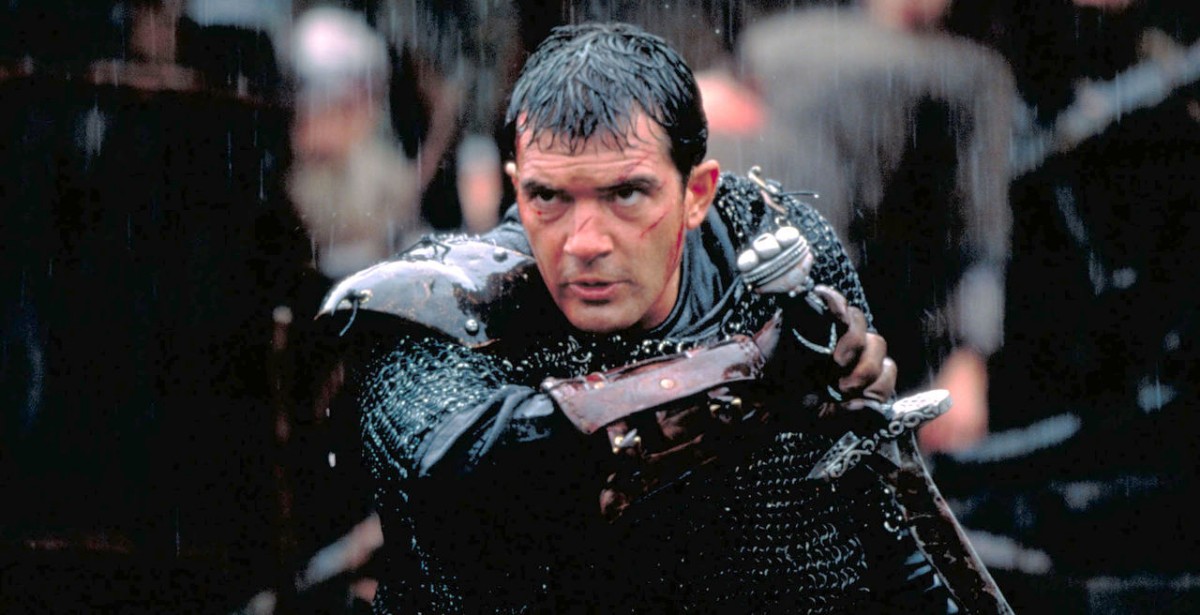 Now, that’s not the story that The 13th Warrior, tells and nowhere in the credits does it say it’s based on that story. It is based on the Michael Crichton novel The Eaters of the Dead. The 1976 book was based on two sources, one being Beowulf, and the other being the very real story of Ahmad Ibn Fahdlan, an Arab explorer whose journey to Viking lands in the 10th century is one of the best primary sources about Viking culture of the age.

The 13th Warrior is a fictionalized version of Fahdlan’s (played by Banderas) time with the Vikings, and it uses Beowulf as a framework for that time. It’s an ingenious move, honestly. The early scene when he encounters a Viking funeral is taken directly from the real Fahdlan’s observation of such a rite. And from there Fahdlan becomes our entry point to the story and the culture. It’s a flip of the Dance with Wolves trope with a racial dynamic based in real history, and it works.

Fahdlan ended up basically press-ganged into joining the Viking leader Buliwyf and his companions in a quest to aid a king, Hrothgar, who like King Hrothgar in the original Beowulf, is under attack from a mysterious monster. You see, they need a 13th Warrior who is not from their lands. Roll credits! Fahdlan, who has been exiled, goes along, though he’s terrified and not too keen on the Vikings. He does eventually learn their language and the transition and learning the language scene is perhaps one of the best in the whole film.

I don’t want to go plot point by plot point, but the way that The 13th Warrior adapts and takes inspiration from Beowulf is very cool. You don’t need to know the story to enjoy the movie, but seeing the little nods and references to Beowulf throughout really enhances it.

In the original Beowulf, when Grendel first attacks, Beowulf manages to lop off Grendel’s arm. In this version, there is no monster—instead the danger comes from a mysterious tribe, the Wendol, who are said to eat their dead. After their first attack one Viking warrior manages to cut off a hand. There’s no dragon in the 13th Warrior, but the Wendol instead form a line of torches in the mist to create the look of a “fire worm” when they attack.

But I think the most interesting and insightful adaptation is with “Grendel’s mother.” I talked just yesterday about how so many stories and myths about dragons and other monsters were possibly symbolic of different struggles, often between tribes of different faiths. Dragons and the like often symbolized goddess-based religions, some scholars theorize, and that’s made very literal here. The Wendol carry around small versions of the Venus of Willendorf, a paleolithic goddess.

The Vikings attack the Wendol and kill their “mother,” who in this version is a Shamaness who is found in a cave with a giant goddess statute. It makes very literal the (potential) symbolism and subtext of Beowulf: that Grendel, his mother and the monsters were nothing more than symbolic of different cultures. It’s subtle and not dwelt on, but it’s very cool.

The 13th Warrior is great for a lot of reasons. It’s suspenseful, well-made, and Antonio Banderas is truly wonderful in the lead. It is problematic, yes, that a Spanish man plays an Arab, but … at that point in history, most of Spain was under the control of the Islamic Caliphate, so I’m not going to quibble. The fact that Banderas is the only well-known actor (aside from a brief appearance by Omar Shariff) in the film actually increases the feeling of alienation around his character, and his journey from prevailing the Vikings to respecting them is well-done.

Beowulf has been adapted as its own movie (with Angelina Jolie famously playing the very sexy mother of Grendel), but I prefer this version because it doesn’t just tell the story, it explores the potential “real” meaning behind it while bringing in some other history. The 13th Warrior is about cultures meeting and clashing in all sorts of different ways, and it tells that story incredibly well.

The 13th Warrior isn’t currently streaming anywhere right now, which is a shame, but it is available to rent on multiple platforms and if you’ve never seen it, it’s entirely worth the watch.