Antihydrogen Held for 10,000 times longer than ever | The Mary Sue

Antihydrogen Held for 10,000x Longer Than Before 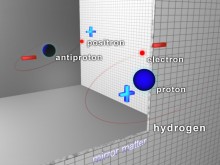 Scientists at the Swiss CERN labs have announced that they have made great strides in antimatter reasearch: Keeping the stuff around long enough to study it. Working with the Antihydrogen Laser Physics Apparatus (ALPHA), the team was able to create and store antihydrogen atoms for about 15 minutes, 10,000 times longer than ever before.

Antimatter, which is the volatile Nintendo-esque twin to normal matter, is notoriously hard to store. It reacts violently when coming into contact with normal matter, and can easily escape if they are too energetic after being created or are struck by stray particles. This has kept scientists from answering fundamental questions about antimatter, such as whether it is an exact mirror of normal matter.

Last year, the team demonstrated their ability to hold a gaseous cloud of antihydrogen in a magnetic trap for 170 milliseconds. Antihydrogen is particularly difficult to trap magnetically, as it has a neutral charge. This time around they shattered that figure with some new techniques, one of which involved greatly cooling the antiprotons which generate the antimatter, keeping their energy low and safe within the trap.

This test was primarily to demonstrate the storage capabilities developed by the team, but could be a major boon to other antimatter researchers. After all, it’s hard to study something that exists for so short a time.

(via New Scientist, image via Wikipedia)