Oh my god, just get the damn shot! 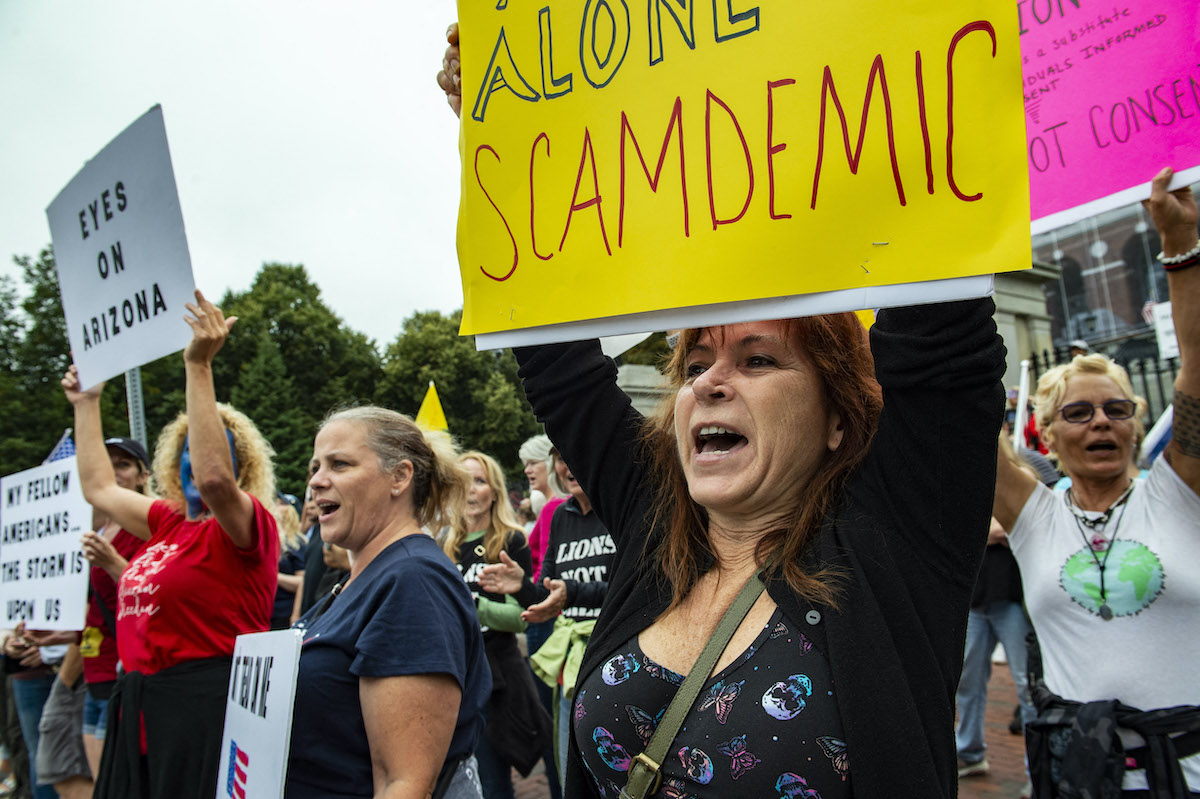 Earlier this month, Breitbart editor-at-large John Nolte put out a theory that the reason there are so many unvaccinated conservatives is because, despite what we say, that’s what the left wants. Nolte proposes that vaccine mandates, along with the “bullying” and mockery anti-vaxxers experience, are all part of a big reverse psychology plot designed to make them “dig their heels in” and become even more obstinate in their refusal to get vaccinated.

Rather than let us feel like we on the left have “won,” they are literally dying to own the libs. And apparently, that was our plan all along.

In a country where elections are decided on razor-thin margins, does it not benefit one side if their opponents simply drop dead?

If I wanted to use reverse psychology to convince people not to get a life-saving vaccination, I would do exactly what [Howard] Stern and the left are doing… I would bully and taunt and mock and ridicule you for not getting vaccinated, knowing the human response would be, Hey, fuck you, I’m never getting vaccinated!

And why is that a perfectly human response? Because no one ever wants to feel like they are being bullied or ridiculed or mocked or pushed into doing anything.

a lot going on here pic.twitter.com/fezewZhAMr

That is, obviously, absurd, and for so many different reasons. Nolte centers his theory around a recent Howard Stern segment, but really, there’s no shortage of anger, mockery, and bleak schadenfreude aimed at unvaccinated people, especially online. But much of that aggression is relatively recent and is a reaction to the refusal to get the vaccine, as are the federal government vaccine mandates. President Biden announced a mandate for federal employees a little over a week ago, at the same time Stern was mocking the death of conservative radio hosts—purportedly the impetus for Nolte’s whole theory. The vaccine first began to be distributed in December of last year.

So what’s the excuse for refusing the vaccine for those nine months in between? It wasn’t a response to a reaction that hadn’t happened yet, so … what was it?

Nolte also conflates Democrats in office with liberal media figures as one giant “leftist” force, in a severe overestimation of the left’s ability to work together on anything. Honestly, I wish we were that effective because then we could just pass all the massive necessary election reforms that Democrats have been pushing for decades. We can’t pass legislation despite controlling the White House and both chambers of Congress, but we’re cunning and manipulative enough to reverse psychologize nearly half of the electorate into putting their lives in immediate danger? I would actually be impressed if that were the case.

But if Nolte had anything close to a valid point (he doesn’t), he would have undermined it with this staggering show of ignorance:

Final note: How many of you were aware the CDC believes that 99.5 percent of those dying are unvaccinated? I bet not many of you. So why would the metric that is the most convincing one not be all over the place? Once you learn that 99.5 percent of deaths are unvaccinated, it cuts through all the muck. That number is startling, an eye-opener… Forget cases, forget mandates, forget masks, and Howard Stern… When you learn that almost everyone dying is unvaccinated, that’s a come to Jesus moment.

Does Nolte actually think that’s a fact anyone is trying to hide? That statistic is no secret; it’s everywhere. From local to national to international news coverage, to official (publicly available) government data, to medical researchers, this statistic is information politicians and scientists are desperately trying to get out there, hoping for that very “come to Jesus” moment that has, largely, failed to materialize. No one is trying to hide it! It’s on WebMD!

Nolte makes it clear that he truly hates Dr. Anthony Fauci, as well as the mainstream media, which is too bad because if he were paying attention, he would have heard Fauci tell NBC’s Chuck Todd about all of these unvaccinated hospitalizations and deaths back in July. He also said the same thing during a White House press briefing around the same time.

Yes, there is a lot of derision out there for anti-vaxxers, mostly because we are a year and a half into a pandemic that should be long over, and those of us who masked up, stayed inside, got vaccinated, and took every other precaution we could to stay safe still find ourselves stuck in this terrible reality, thanks to the millions of Americans who would rather literally die than “give in” to liberals’ request that they, you know, not die.

There’s a lot of discussion out there about the best ways to reach these pro-MAGA, anti-vaccination holdouts, and how they must be made to feel understood and not judged or ridiculed—to which a lot of people are responding: no.

This latest theory, which seems to be started by Nolte but, by the end of last week, had been picked up by at least a few other prominent conservative voices, is just further proof that anti-vaxxers will shift the goalposts to fit whatever current alternate reality they’ve constructed to justify their own obstinance. If we express empathy, it’s “virtue signaling”; if we show anger, they’ll “dig their heels in.” Mocking and ridicule may not help, but nothing else does, either.

I don’t know why so many grown adults care this much about what they imagine people on the other side of a political divide think of them, but I do know that there’s no winning this game, so it’s best not to play.