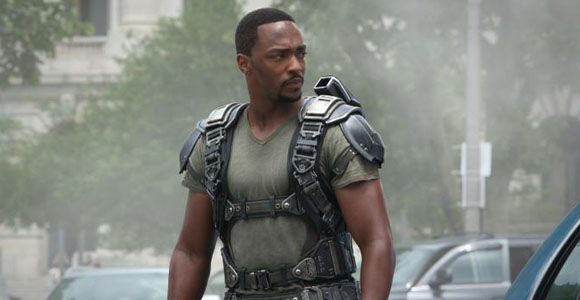 And it isn’t the first time. Or the second, for that matter.

It’s not always the easiest thing to go to bat for an underrepresented segment of society when you belong to another which also needs attention. It’s human nature for most of us to look at things squarely from our own personal world view. But not Mackie. Not only has he constantly discussed the need for more heroes of color on the big screen, he thinks we need more women too.

GeekDad.com posted an interview session they were a part of with Mackie in which the actor said he thought it was “cool” to be the first African-American superhero [on the big screen] (we’re assuming they weren’t counting characters like Blade or Spawn) [Edit: It seems the context may have just been, how does it feel to be Falcon in general, not on the big screen. That was our assumption.]. He said, “When I was a kid, I really didn’t have a person I could look at, other than my dad, and be like, ‘Hey, I want to be that guy and fly through the window.’ You couldn’t be like 7 years old and say, ‘Who do you want to be for Halloween?’ ‘Shaft!’”

He went on to say:

When I first got this role I just cried like a baby because I was like, “Wow, next Halloween, I’m gonna open the door and there’s gonna be a little kid dressed as the Falcon.” That’s the thing that always gets me. I feel like everybody deserves that. I feel like there should be a Latino superhero. Scarlett [Johansson] does great representation for all the other girls, but there should be a Wonder Woman movie. I don’t care if they make 20 bucks, if there’s a movie you’re gonna lose money on, make it Wonder Woman. You know what I mean, ’cause little girls deserve that. There’s so many of these little people out here doing awful things for money in the world of being famous. And little girls see that. They should have the opposite spectrum of that to look up to.

Slow clap for this guy.

[Edited to add: Of course we want a Wonder Woman film which is successful on all fronts but Mackie is completely right about the intent of the film beyond money making. The 1984 Supergirl film got terrible reviews and is always brought up when people want an example of why female superhero films don’t work but you know what? I saw that movie as a young girl and was completely obsessed. It made me love superheroes more than the Christopher Reeve Superman films because I could imagine myself as one. Do not underestimate the power of that impact.]

The interview also includes some adorable things like Mackie talking about his costume. “The first time I put that costume on, I couldn’t stop smiling; I was running around the room. It’s one of those moments where you just have to allow yourself to enjoy it,” he said, “I really took every moment to enjoy being a superhero.” Also read the rest for a completely believable story about how he got into trouble for signing a bunch of Falcon posters at a craft store.