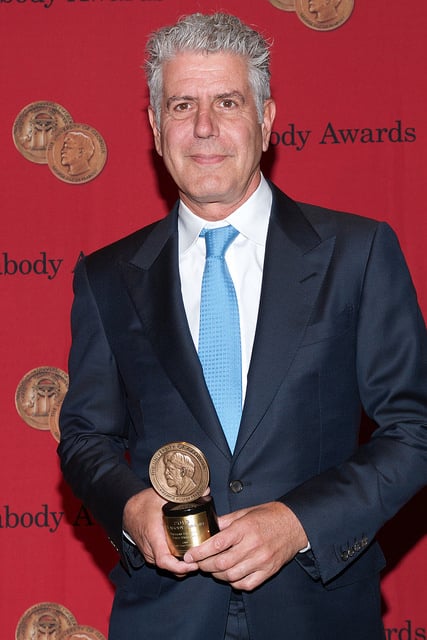 A lot of dudes are doing a lot of reflecting right now about sexual assault and harassment, which is a very good thing. Anthony Bourdain, celebrity chef who happens to be dating actress/director Asia Argento, one of the many women who came forward about Harvey Weinstein, has been doing a lot of thinking and speaking lately about his role in helping to perpetuate a sexist, sexualized culture in the food world.

In a recent interview with Slate, Bourdain talks about never having been comfortable in the “bro” culture of the restaurant industry. He went to Vassar, and his first restaurant gigs were in Provincetown, MA, “a largely gay, very sexually free, libertine-esque environment. I was coming out of a mostly women’s university where men were a tiny minority.”

But the male-dominated restaurant industry has a long history of male-inflicted abuse. He describes it like this:

“[W]e’re talking about a militaristic, male system that goes back in Europe back to the guild system, generally populated in the classic example by abused male children who were abused in kitchens, worked their way up through this sadistic system of hazing, became chefs and then abused those below them in the same way. The traditional system was the male chef would abuse his male chef de cuisine. The male chef de cuisine would then abuse his sous-chef. The sous-chefs would take it out on all the cooks who would then physically hit, kick, torment, haze, and pressure each other as punishment for bringing this shit down on them yet again. And God help you if you were a woman in those days.

“There are a lot of chefs still walking around who came up through that system.”

This is an explanation, but not an excuse. Bourdain describes a very tricky walk between both perpetuating and trying to fight the “meathead culture” that this kind of male hazing creates.

On the one hand, sexist talk around him made him very uncomfortable and he felt like it demeaned him and everyone around him. “I’ve certainly fired people,” he says. “Even back in the ’80s: If somebody was taking their personal business out on a female employee, or creeping on an employee, they were gone. They were fucking gone. It was just not something I could live with.”

On the other hand, he knows that at a certain point, he chose to accept the “bad boy” persona. “There I was in the leather jacket and the cigarette,” he says. “And I also happily played that role or went along with it. Shit was good. People said a lot of silly things about me. People actually used the word macho around me. And this was such a mortifying accusation that I didn’t even understand it.”

Bourdain also recognizes that it’s this bad boy persona that has perhaps made him appear to be someone who is not ally material, which is something he’s been thinking about a lot in light of the recent allegations against Weinstein and others:

I’ve been hearing a lot of really bad shit, frankly, and in many cases it’s like, wow, I’ve known some of these women and I’ve known women who’ve had stories like this for years and they’ve said nothing to me. What is wrong with me? What have I, how have I presented myself in such a way as to not give confidence, or why was I not the sort of person people would see as a natural ally here? So I started looking at that.”

You should check out the full interview, as this is the kind of reflection that many men need to start and continue doing right now.

As for one way he might be able to help rid the food world of bro culture, perhaps he could do what he can to increase representation for women in the food/travel world. I love shows like Parts Unknown and No Reservations, because I love food, travel, and adventures. Bourdain goes on excursions and has adventures that I would love to be a part of.

Plenty of women love food and adventures, but you wouldn’t know it based on the number of angry, aggressive, loud, mostly white chefs hosting shows as they berate people and throw plates. Or is that just Gordon Ramsay? Bourdain’s shows aren’t like that, but they do perpetuate this idea that a “real” food and travel show has to be hosted by a dude, because “bad boy dudes” are adventurous and more interesting.

I would love for Bourdain to produce a food/travel show with a female chef. Something global and gritty like a No Reservations, but with a female host. As we’ve learned from efforts like The Representation Project and the Geena Davis Institute, you can’t be what you can’t see. One step toward making food culture less about “bro culture” is to let the world see that it’s not just bros who are doing cool stuff.

For right now, though, Hannah Hart’s Food Network show, I Hart Food, might be a great place to start.