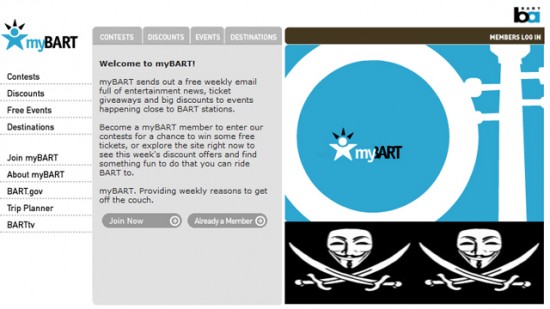 After San Francisco’s Bay Area Rapid Transit (BART) fessed up to disrupting cell phone service in hopes of preventing a protest, they attracted some attention from your friendly, faceless, neighborhood hacking organization Anonymous. Naturally, the accusations of censorship flew and Anonymous threatened cyber-justice through hacking. Sometime between noon and 6 p.m. yesterday, they followed through.

The hack, in addition to defacing the site with signature Guy Fawkes masks, also turned up some internal documents including a User Info Database that contained addresses and phone numbers of thousands myBART users. Following the leak, Anonymous apologized to the non-BART employees, assuring them that “the only information that will be abused from this database is that of BART employees.”

For BART, It’s not over yet: Anonymous is making the push for another real, in-person protest at the Civic Center station today (8/15) at 5 p.m. Protestors have been encouraged to wear red and record as much of the event as possible. While the protest is intended to be peaceful, Anonymous have suggested the possibility that they might attempt to jam police radios.

While Anonymous has been hacking things left and right, this is their biggest push for in-person activism since the Project Chanology protests that arguably solidified Anonymous into what it’s become today. There’s no telling how many people will show up or how many of those are associated with Anonymous (although the number of Guy Fawkes masks should give a fairly reasonable indication) but hopefully, whatever the size, the protest will remain peaceful as intended. If the attendance is OVER 9000!!! like some Anons estimate, the protest could seriously impact BART service and public image. We’ll find out tonight.