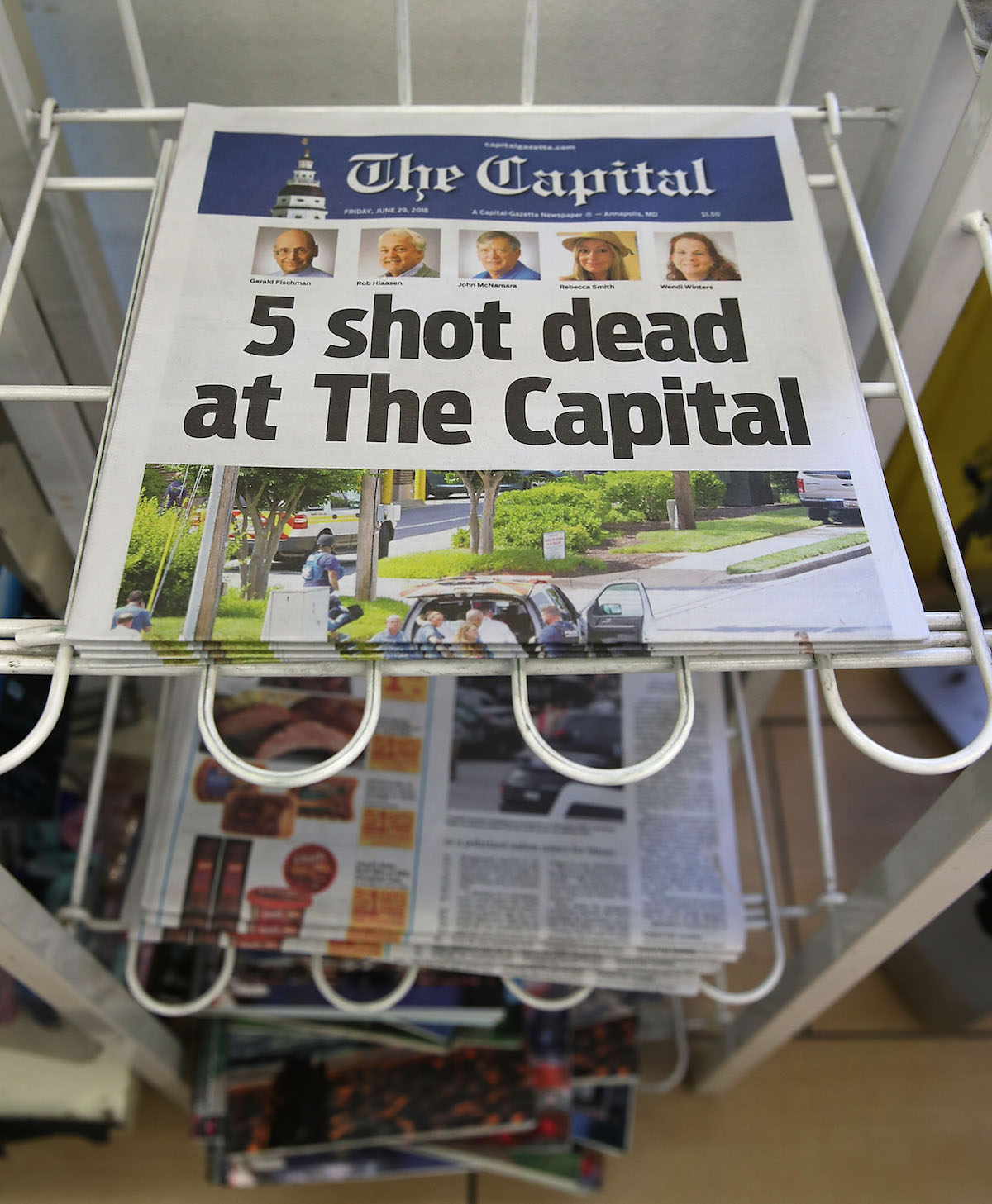 As we try to come to terms with the horrific shooting in the newsroom of the Annapolis Capital Gazette yesterday, we are all, of course, searching for a reason why this happened. For most of us, our minds immediately go to Trump’s attacks on the media, recalling every declaration that the “fake news” (which really only ever means news that is critical of him) is the “enemy of the American people” or simply, ominously, “the enemy,” every violent meme, every time Sarah Huckabee Sanders tried to paint herself as the victim of those mean journalists.

Some–the ones who have bought into this idea that journalists are the enemy and that critical news = fake news–are blaming the journalists themselves. The darkest corners of the internet are celebrating these murders, but even Fox News is basically praising the employees of the Gazette as being “some of the good ones,” not making it hard to infer what they are their audience see as the alternative.

Glad Fox News checked to see if they deserved to be murdered or not https://t.co/F2IIQSNEiO

so we’re already at “Maybe the newspaper DESERVED to be shot! Who’s to say? There are two sides here!” huh https://t.co/vbg5LtWIcQ

While we cannot discount the importance of the narrative that’s been created by this current administration, tirelessly working to vilify the legitimate press, it’s unsurprising to hear that at the root of the hatred the alleged shooter, Jarrod Ramos, bore for the Gazette was another all-too-familiar point: obsessive, possibly abusive behavior towards a woman.

We’ve seen this time and time and time again: long before these men turn to mass murder, their treatment of the women in their lives tells us everything about them. From Parkland to Las Vegas to Orlando to so many others, these men inflicted their violence and emotional abuse on women prior to making headlines with the murders they commit.

Except Ramos did make headlines for his abuse, which seems to be exactly what made him so angry. In 2011, Ramos pled guilty in a harassment case involving the online stalking of a woman he went to high school with. The Gazette ran a story reporting on the case and Ramos apparently became enraged. He sued the paper for defamation, which the court wrote in its official ruling, “reveals a fundamental failure to understand what defamation law is and, more particularly, what defamation law is not.”

Ramos then created Twitter accounts with the avatars of the reporter who wrote the original article as well, apparently, as a judge who ruled in the case, with a symbol representing sacrifice from the anime and manga series Berserk photoshopped onto their foreheads.

Ramos had reportedly been harassing and threatening the staff of the Gazette for years. A lawyer representing the paper in 2011 told the Daily Beast following yesterday’s shooting that they had been “concerned about him at the time, it definitely came up more than once.” He said, “And it was because of his Twitter feed.”

Brennan McCarthy, the lawyer who represented the woman Ramos harassed, told CBS, “He was as angry an individual as I have ever seen. She lost her job because of this individual…He is malevolent. He forwarded a letter to her employer, basically stating that she was bipolar and a drunkard which is ridiculous.”

The original Gazette article was titled “Jarrod wants to be your friend,” which detailed Ramos’ abuse of his former high school acquaintance after friending her on Facebook in 2009. His emails reportedly told her to “go hang yourself.” “You’re going to need a restraining order now,” he wrote, according to CBS news, telling her “you can’t make me stop.”

So what appears to have happened is that the Capital Gazette reported on a woman who had suffered abuse and Jarrod Ramos could never get over that. For Trump, Huckabee Sanders, and everyone who buys into their claims that the media is the enemy of the people, I wonder if they have ever or could even imagine working so hard for the good of other humans and suffering so terribly for it.

Journalists are heroes and anyone that says otherwise is either gullible AF or has a seriously nefarious agenda.

This is on the homepage of the Capital Gazette website. pic.twitter.com/so2Ucfev20

The Times-Picayune kept working while Katrina destroyed their homes.

WDBJ didn’t stop working when two of its reporters were murdered on air.

KHOU 11 kept filming as their offices flooded during Harvey.

The Capital Gazette will put out a paper tonight.

You cannot stop us.