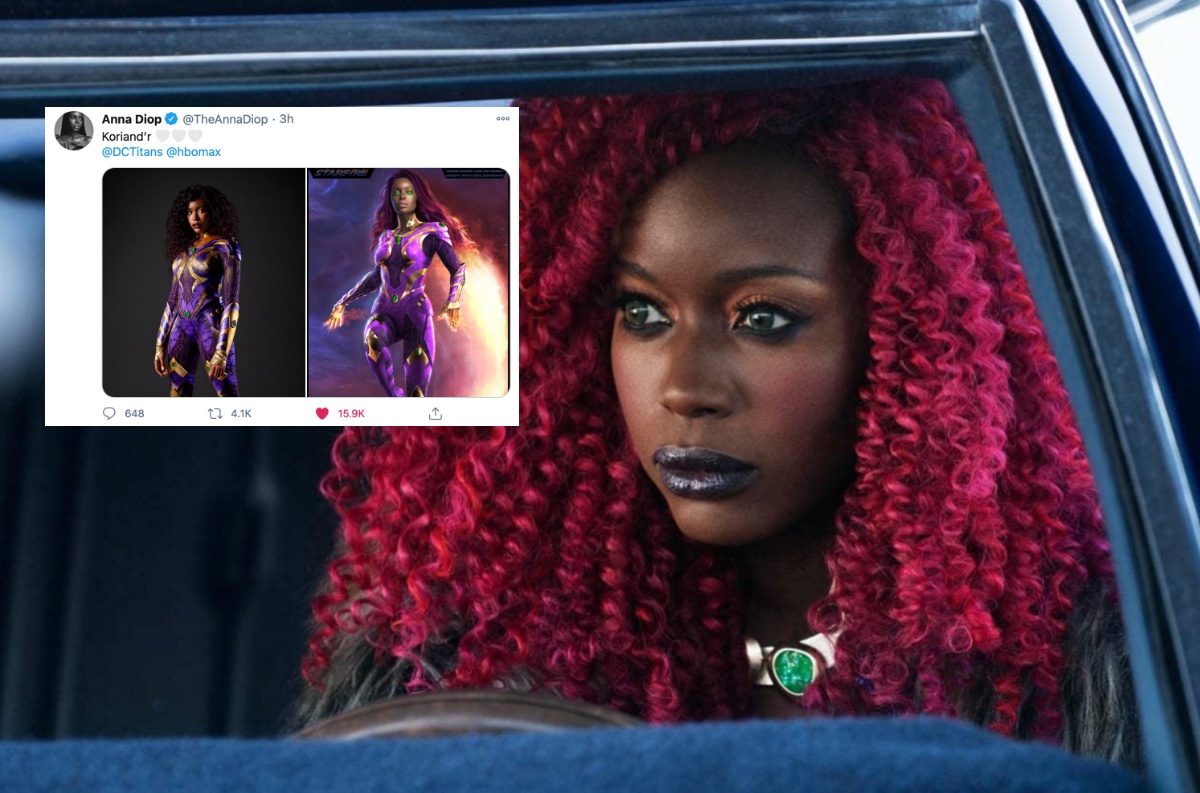 Finally, Anna Diop has the styling she deserves!

Bow when in the presence of Queen Starfire 🔥 @TheAnnaDiop @hbomax pic.twitter.com/p7Kv2Ez2TX

I have many complaints about HBO Max’s Titans (r.i.p., DC Universe), but Starfire, as played by Diop, is not one of them. The actress has consistently been one of the best parts of this entire series, and I am so happy that they have finally delivered on styling her in a way that best complements her.

We were supposed to get a Kory in costume during season one before the episode where it was featured was scrapped, but this one is really cool and highlights that our girl is a damn alien queen! I’m glad they decided to finally just let her hair be Black. I think that Anna Diop could have absolutely rocked red, and season two’s wig was an upgrade, but the reality is that the stylist wasn’t really doing anything interesting with her hair in that state. Hopefully, black hair will allow for some creativity in the hair department (something all the wigs in the series could use, to be honest).

We don’t know entirely what season three of Titans holds for the alien queen, but we do know that her sister, Blackfire (Damaris Lewis), has arrived on Earth and is looking for revenge on her sister. I am looking forward to seeing these two sister-queens duke it out, and they’d better make sure the special effects budget is prepared because I want purple vs. red fire, damn it. We deserve it as an audience because why else have two alien queens fight each other?

Anna Diop, like pretty much every Black person in a superhero project that is playing a character who wasn’t initially BIPOC, has dealt with a lot of social media harassment—so much so that she initially had to leave the internet. It is totally racist how she was treated. Criticisms about the costuming and styling is one thing, but to call her ugly and have colorist attacks was beyond. Still, she has been beyond fantastic, and I am so glad she continues to cash in these DC checks while the haters have no choice but to acknowledge she is one of the best parts of the show.

It will be a while until we actually see season three of Titans. Due to the COVID-19 pandemic, production was delayed before any filming could begin. Production had resumed by October 2020 and is set to conclude by June 2021, but considering how everything is going in this pandemic, it is so much more important that people stay safe. So, until then, at least we know when she comes back … she’s going to look amazing.