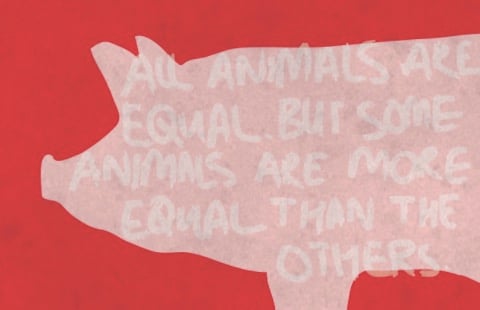 George Orwell’s name has been tossed around a lot in relation to modern politics and technology, to varying degrees of accuracy. Here’s something that you can certifiably deem Orwellian, though: a video game based on the 1945 Orwell novel Animal Farm.

The original novel was a fairly direct critique on the effect of the 1917 Russian revolution and the major figures involved, and the game will go the same route with story-heavy farm management gameplay—like Harvest Moon if it were about the dangers of totalitarianism. With an indie development team of members who worked on games like RuneScape, Fable, and The Witcher 3, and George Orwell’s estate looking closely over their shoulders, we can only hope that the game will live up to the source material as well as its creators intend.

Developer Imre Jele told Engadget that he’s had this game in mind for decades, but he seems to think that now is really the right time for it. He said, “Over the last decade, we’ve started to see some governments use language eerily similar to oppressive regimes of the past. I can’t help feeling personally challenged to create a game adaptation of Animal Farm, as I myself grew up under a communist regime.”

The game’s unique genre mix will help drive home its main points and allow players to identify both with the oppressors and the oppressed (as Jele told Polygon)—not to make us sympathetic to oppressors, but to foster a better understanding of their motives. It’s a lofty goal, but it’s also an important one when groups in the real world are becoming increasingly adept at hiding their malicious aims from everyday people who don’t pick up on their “dog whistle” tactics.

Though it kind of sounds like it can’t arrive fast enough, it’s still in very early development, with no planned release date just yet.