Maybe they should hurl some angry birds at some banks. 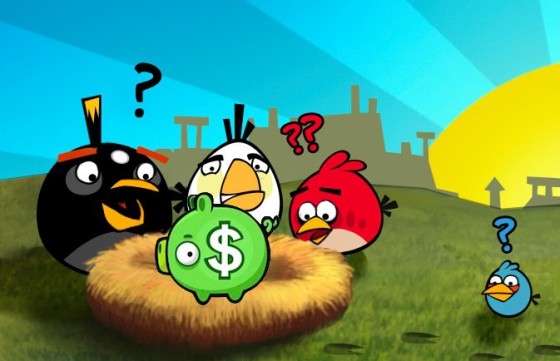 Angry Birds was first released in 2009, and since then it’s become ubiquitous. Even if you’ve never picked up a smartphone in your life, you’ve seen those stupid birds on T-shirts and lunchboxes all over the place. It will probably give you more than a little schadenfreude to know, then, that Rovio’s profits have sharply declined in the last year.

Part of the reason for the decline might be the company’s transition to Free-to-Play games, such as the recently released Angry Birds GO!, which makes its money through in-app purchases and which has thus far failed to break out alongside such stiff competition from King’s Candy Crush Saga and Mojang’s Minecraft. Many reviewers felt that this transition to in-app purchases made Rovio appear greedy, which Chief Executive Mikael Hed denies. “Our results show that we weren’t that greedy—we weren’t greedy enough, perhaps,” he said in an interview at the company headquarters. Which sounds about right, considering that the company made a net profit of $76.8 million last year and only $37.2 million now.

But those of us who get annoyed by the Angry Birds-themed gummy snacks at our local supermarket shouldn’t burst into a rousing chorus of “Ding Dong the Witch is Dead” just yet. Rovio’s still got a lot going for itself —  it’s bumped its staff up from 500 people to 800, started a movie production studio in the U.S. that will reportedly release its first film in 2016, and has that RPG-style game Angry Birds EPIC! coming up later this year. They also opened six different theme parks in Finland, Spain, and China last year, and published over 100 different children’s books.

So they’re admittedly stretching themselves pretty thin, but they’re pretty confident that this is just growing pains. “We’re creating long lasting business, and strongly believe our entertainment strategy will consolidate Rovio’s position as one of the world’s most beloved brands,” they said in a prepared statement. Right. That’s what Zynga said. Remember those guys, and something about a farm? Didn’t think so.

(via Phys.org and Wall Street Journal)