The Newest Version of Android Dislikes The Holidays, Doesn’t Include December 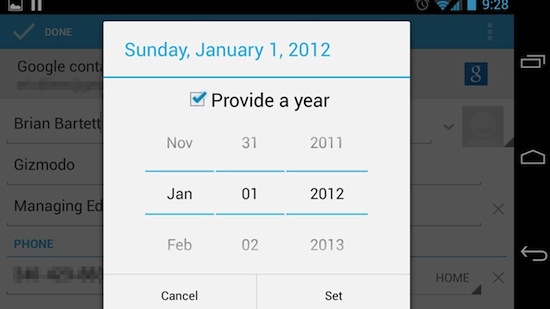 The end of the year can a be a very lonely time for a smartphone. When the holidays roll around, people tend to get together with their families and speak to each other in person, so the phones just sit there in their owners’ pockets or on a table somewhere. Well, after years of abuse, Android-based phones have decided they aren’t going to take it anymore. As a sign of protest, (or because of unforeseen bug) Android Jelly Bean 4.2 skips the month of December, in certain apps.

It’s entirely possible that to download the update and start using it without noticing this fun fact. Google’s Calendar app is working fine, so your schedule isn’t going to get destroyed or anything. You won’t start running into the problem until you start using the People app: If you start trying to sync your rigorous holiday party schedule with specific contacts, you’ll find that your Android device is unwilling (read: unable) to let you connect the two since, in the phone’s world, the month of December simply doesn’t exist.

Obviously this isn’t something that Google will allow to go on for very long, so chances are this you won’t run in to this problem unless you’re looking for it. Still, you should do something nice to let your smartphone know it isn’t alone, even at the most social time of the year.

UPDATE: As it has been pointed out in the comments, the bug removes the month of December in general, not just December, 2012. (Thanks Eric and anonymous guest!)