Android 4.0, Ice Cream Sandwich, is Coming to the Raspberry Pi | The Mary Sue

Android 4.0, Ice Cream Sandwich, is Coming to the Raspberry Pi 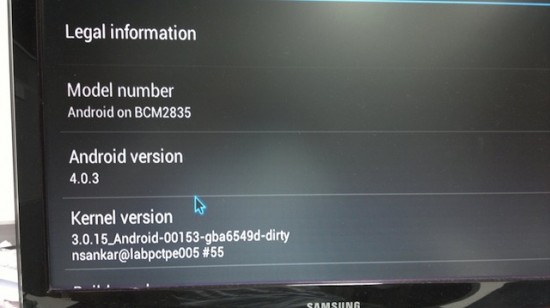 Considering the Raspberry Pi is a competent — albeit underpowered — computer that costs only $25 at its lowest price point, and $35 for an upgraded version, the computer hobbyist market was instantly enthralled by the little guy ever since it was introduced. Sure, in this age of computing, it’s a little difficult for the Raspberry Pi to do anything too complicated, and it also needs to be hooked up to a monitor (or remoted into) on top of that, but for $25, it’s not like there’s much of an investment to be made to play around with the thing. Since the Pi doesn’t pack too powerful of a punch, one of its most prevalent limitations is what operating systems it can run; a computer can’t be much of a computer without a way for people to interact with it. The company behind the little guy, the Raspberry Pi Foundation, provides Debian and Arch Linux distributions for their miniature computer. Now, however, if you wanted something a little less obscure, Android 4.0, Ice Cream Sandwich, will be hitting the Raspberry Pi sometime soon.

Though a more popular operating system is on its way, this doesn’t magically up the Raspberry Pi’s hardware, and in turn its capabilities. Considering the Pi is such a tiny computer, it does make a bit of sense to have a mobile operating system available for use on it. Ice Cream Sandwich can do many of the basic tasks a regular computer should be able to do, such as browse the web, play multimedia files, play certain games, and edit office documents, so it should find a good home on the Pi. Currently, hardware-accelerated graphics and video have been running just fine, but the team is working to get AudioFlinger, Android’s native audio system, up and running.

Check out this video showing Ice Cream Sandwich running on the Pi:

Not bad, and after some final optimizations, it looks like it’ll run just fine on the little, cheap computer that could. There’s no official date for Ice Cream Sandwich on the Pi just yet, but considering the Raspberry Pi Foundation announced that it’s coming soon themselves, we can probably assume it’s coming soon. If only I could think of something fun to do with a low-power, dedicated Android or Linux computer that I wouldn’t want to do on my laptop or desktop. Any suggestions?