Despite Handing Anakin’s Lightsaber to Luke, Lucasfilm Announces That It Now Officially Belongs to Rey 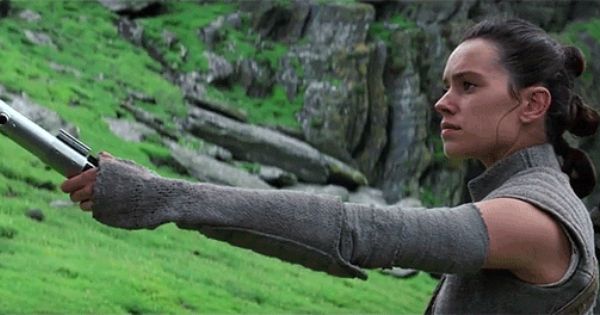 In what may be the most emotionally-charged moment of Star Wars: The Force Awakens, Rey finds Luke Skywalker and returns his lightsaber, the lightsaber that used to belong to his father. However, thanks to a recent interview in Vanity Fair, we now know that as of The Last Jedi, the lightsaber will officially become Rey’s.

The Vanity Fair Star Wars cover story and photo spread about which we’ve all been very excited hit newsstands today! (Happy 40th Birthday, Star Wars!) Thanks to The Star Wars Show, we got another interesting tidbit from the interview (around the 2:40 mark):

For those who can’t play the video, Lucasfilm Story Group creative executive Pablo Hidalgo said in the Vanity Fair interview, “Either way, the blade is no longer considered Anakin’s lightsaber by the Lucasfilm marketing department. It has now been officially dubbed ‘Rey’s’.”

So, Lucasfilm is already dubbing that lightsaber “Rey’s,” even though she hands it to Luke at the end of TFA—it looks like it might be sticking with her for the long haul (and apparently through what will hopefully be a crapton of Rey-centric marketing)! This makes sense to me, as it became Luke’s after Obi-Wan Kenobi gave him the lightsaber that belonged to his father. (Does this mean Luke is Rey’s father?! No, it can’t be. Can it? *speculation powers activate*) Passing down a lightsaber is nothing new, and it’s heartening to know that Rey is being pulled into this family saga (if she’s not genetically a part of it already).

What do you think this being “Rey’s lightsaber” means as far as the bigger picture for The Last Jedi? Please let your speculation run rampant below!