The complete lack of preparation shows entitlement, not knowledge. 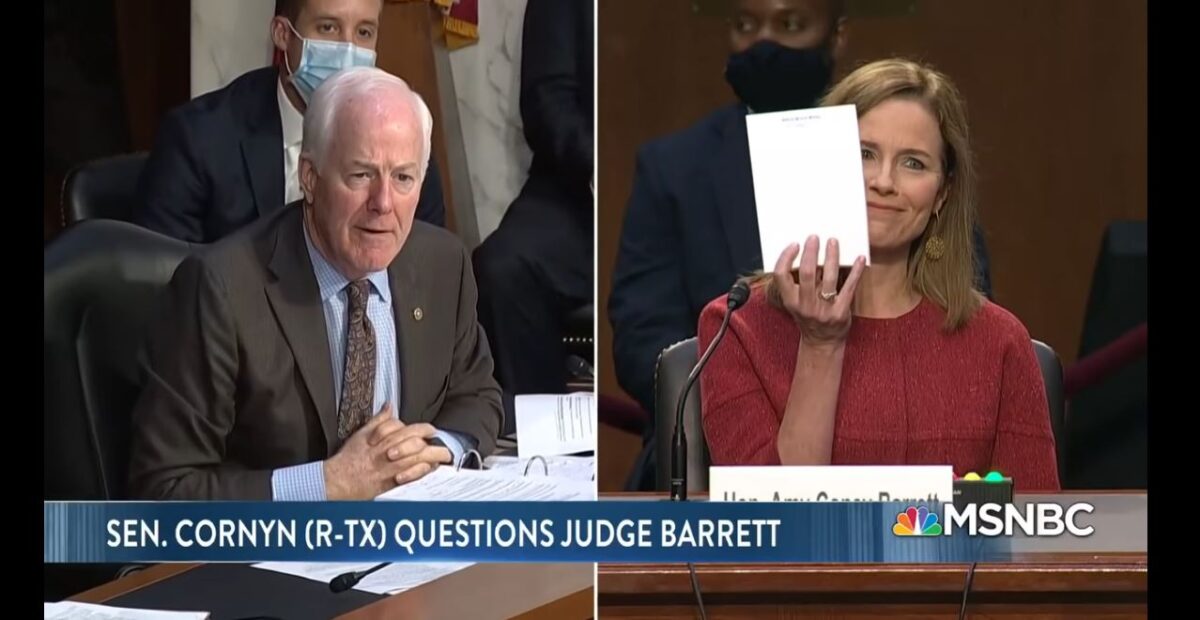 Today is the second day of confirmation hearings for Amy Coney Barrett to take Ruth Bader Ginsburg’s seat on the Supreme Court. With only 21 days until the election, Republicans are fast-tracking her confirmation in a last-ditch effort to pack the court and potentially rule on the results of the election with a conservative majority. And given their majority in the Senate, there seems to be no stopping Coney Barrett’s confirmation.

Coney Barrett knows this, which may be why she brought zero notes, records, or receipts to the multi-day hearing. Today, when prompted by Texas Senator John Cornyn, she revealed a little blank notepad with nothing on it. “That’s impressive,” Cornyn responded, before moving on.

VIRAL MOMENT: Amy Coney Barrett reveals she has no notes at hearing.

Sen. John Cornyn: “Can you hold up what you’ve been referring to in answering our questions? Is there anything on it.”

This has led to a chorus of Republicans praising Coney Barrett for her keen legal mind. “She doesn’t need notes! It’s all in her head!”, they cry as if Coney Barrett’s complete lack of preparation is something to celebrate. But it’s not. As ACB continues to offer non-answers and political doublespeak to the senators’ questions, she isn’t saying much of anything at all. Nobody needs notes to rattle off disingenuous platitudes about the law.

This was when Barrett was asked to show what notes she had brought to hearing. Senators are sitting in front of thick binders of research as they question her https://t.co/WhT6xLFcEn

But much like the president who nominated her, ACB can’t be bothered to prepare. It’s a sign of an oversized ego, of the knowledge that she already has the votes to be confirmed. And she has zero interest in defending her record, because she knows it doesn’t matter. It’s smarm masquerading as knowledge, and zealotry in the face of scrutiny. But Coney Barrett has already shown she’s not taking the process seriously with her omission of important documents to the senate committee.

Democrats on the Senate Judiciary Committee sent a letter to the Department of Justice to request withheld materials from Coney Barrett, which include two lectures given to anti-abortion students groups at Notre Dame. The Democrats’ letter read, “First, Judge Barrett’s SJQ supplement includes two 2013 talks — a lecture and a seminar — about the Supreme Court’s cases on women’s reproductive rights, … Both talks, which were also omitted from Judge Barrett’s 2017 SJQ and attachments, were made public in press reports early yesterday. It is troubling that Judge Barrett supplemented her SJQ to include these talks only after they were identified by the press.”

It feels absurd to type this, but it must be said: America deserves a Supreme Court justice who does the work, who prepares, who gathers evidence, and who doesn’t omit problematic speeches and positions. Her smug lack of preparation is insulting to everyone watching these hearings. If confirmed, she’ll be making decisions that affect millions of Americans. That should be more than enough reason for her to do her homework.

It’s also a searing indictment of these hearings and her nomination. Amy Coney Barrett isn’t making a case for herself because she thinks she’s already won. Many took to social media to call out her concerning lack of notes:

Amy Coney Barrett: I can say literally nothing about how I’ll decide cases.

Sen. Cornyn: wow and you gave that answer with no notes?

Amy Coney Barrett wants to be the replacement for Justice Ruth Bader Ginsburg, and I’m supposed to be impressed she didn’t bring notes to the hearing?

Amy Coney Barrett is going to vote to dismantle health care — and she won’t even need NOTES.

It’s not difficult to be “confident in how you’re going to express yourself” if you plan on… not expressing yourself.

Stop applauding Amy Coney Barrett for having zero notes in front of her during this hearing. She doesn’t need any. She’s not saying anything. #SCOTUShearings

Barrett refused to answer. Then Klobuchar read her the law. Astonishing. pic.twitter.com/cxoIaXTP9e

Maybe this is why 88 of her colleagues at Notre Dame called for her to step aside. I doubt she’ll listen.