With Amy Coney Barrett’s Rushed Confirmation Sham, Republicans Show Us How Quickly They Can Act When They Feel Like It 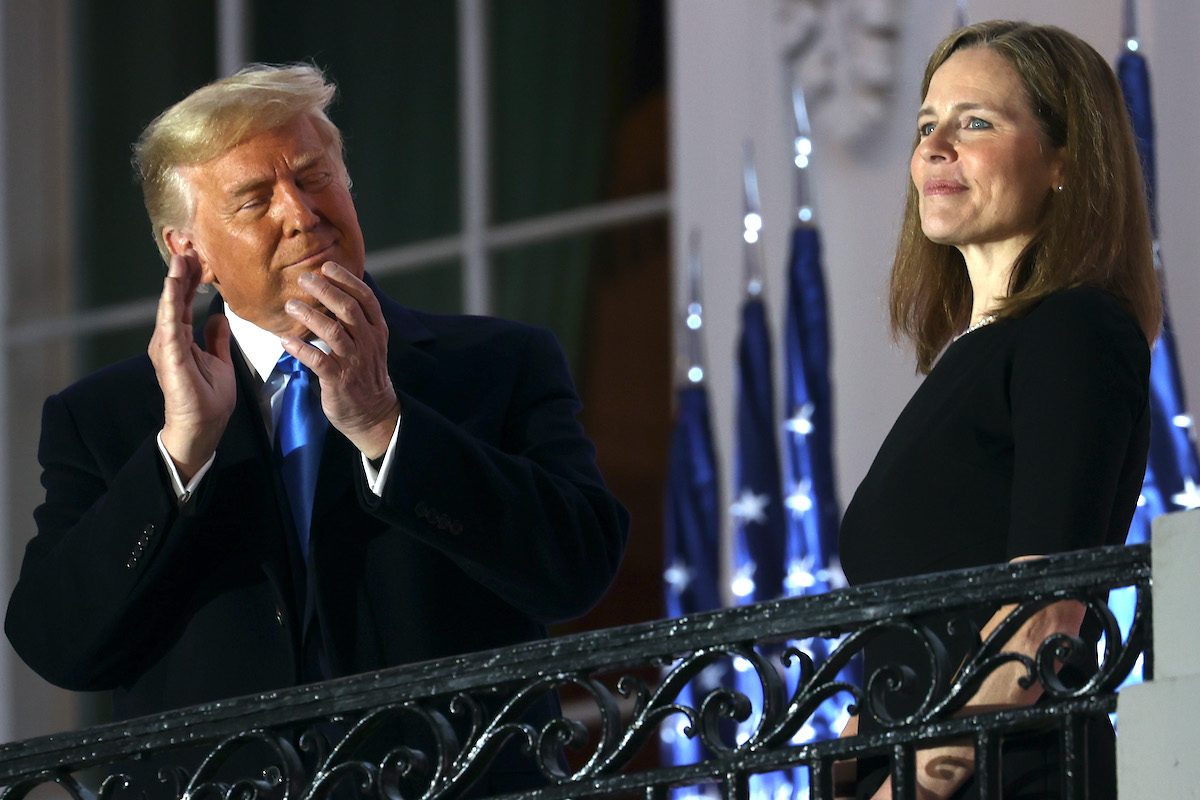 So, in addition to being an undemocratic sham of a power grab, it’s also a slap in the face to everyone in this country who has watched the GOP’s petty stonewalling for months as people continue to get sick and die while we wait for them to pass any sort of economic relief package.

RBG died less than 2 months ago and the GOP already confirmed a new justice. We’ve been in a pandemic for almost 8 months and they haven’t gotten around to distributing struggling citizens another $1,200 relief check. This is America.

Everything about Barrett’s confirmation is disgraceful. Obviously, there’s the hypocrisy of pushing through a nominee this close to Election Day, when approximately 66 million Americans have already cast their vote early, when just four and a half years ago, these same Republicans refused to even hold a hearing or vote on then-President Obama’s nominee in an election year. Every Republican but one (thanks, Susan Collins) voted to confirm Barrett.

Then there’s Barrett herself, whom Republicans claimed was being attacked for her religion, when in fact what people had an issue with was that she herself has said she lets her religion guide her view of the law, completely disregarding that whole separation of church and state thing.

There’s also Barrett’s qualifications, which are basically nil. Barrett’s career has mostly been in teaching and she has only been a judge for all of three years. I’ve been writing for this website longer than Barrett has been a judge.

I AM CRYIN BRO WHAT THE FUCKK 😭😭😭 pic.twitter.com/0b6Ba3DTN6

Who knew you could make it to the Supreme Court without ever trying a case and being a judge for only 3 years. White women finally get to fail upward too!

Honestly I’m applying to every job that I’m clearly under qualified for because nothing matters. https://t.co/zYeHGPZjkQ

In addition to being the least qualified Supreme Court Justice in decades, she’s also one of the youngest justices to be appointed ever, meaning she and her religion-driven, “originalist” opinions will be influencing the court–which now has a 6-3 conservative majority, with three of those conservatives having been appointed by Trump alone–for decades to come.

Imagine being an originalist, basing everything on what a group of guys from the 1780s thought about government, and then saying “we have to know the results on election day” which was literally impossible in 1789. Originalism is a sham doctrine to excuse raw exercise of power.

On top of all of this, following Barrett’s confirmation, the Twitter account for the House Judiciary Committee Republicans posted a glee-ridden celebratory tweet, tagging in Hillary Clinton for maximum pettiness.

I’m having trouble imagining what kind of a person would think that was a perfectly fine and professional thing to do.

You are hideous people. Hijackers of justice. Genocidal dictator apologists. Faux leaders who turn the other cheek to bounties on our soldiers. I hope your pearl-wearing agent of the patriarchy was worth it when you all lose your jobs.

I’m just gonna bookmark this to show to the next Republican dweeb who whines about “civility”. Also for schadenfreude as your party collapses over the next few years. Thanks so much! ❤️

Oh look, mean girls hacked @JudiciaryGOP’s account. Because surely, no Members of the House of Representatives could be this stupid and petty, right? https://t.co/Bz8kFK7orP

Tape this to your bathroom mirror. Let it rage inspire you to fight for every vote, every seat, every woman. https://t.co/OtBHjESd28

Hillary Clinton–a private citizen not currently running for office–didn’t respond to the tweet but she did make her feelings known.

Senate Republicans just pushed through a Supreme Court justice who will help them take away Americans’ health care in the middle of a pandemic.

For them, this is victory.