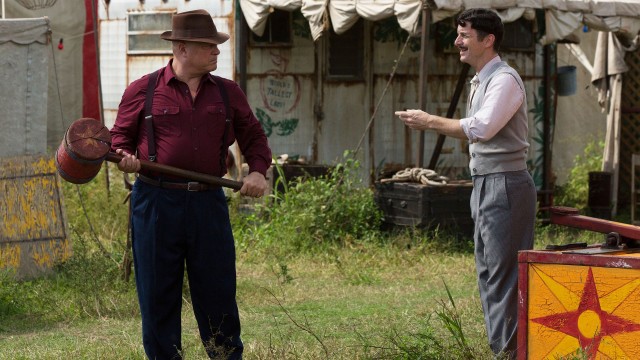 Picking up right where the last episode left off, “Test of Strength” opens with Jimmy finding Bette and Dot in Dandy’s house. Jimmy appeals to the twins to return to the freak show. He says that with Dandy, they’re just “freaks to be gawked at”; Bette astutely points out that that’s not at all different from life at the freak show.

The pollyannaish Bette wants to stay with Dandy, whose love she has unwisely been reciprocating; Dot, who hates Dandy even more after learning he betrayed her trust to read her diary, wants to go. It looks like we’re heading for a crisis, but Bette declares, “I choose my sister always,” and they leave with Jimmy. Bette’s ironclad love for the sister who once tried to kill her and still plots her demise continues to be heartbreaking. I’m still holding out hope for Dot to realize she actually feels the same.

A surprisingly early appearance of American Horror StorGlee is next, as Jimmy sings Nirvana’s “Come As You Are.” It was annoying how his voice was mixed to sound almost identical to the original, but the song’s message is quite relevant to the freak show concept. Anyway, the musical interlude segues into Jimmy confronting Elsa, since he now knows she dumped the twins at Dandy’s; they didn’t run off like Elsa claimed. Elsa’s vindictiveness is about to be exposed before everyone, before Dot inexplicably bails her out.

Dot lies by saying they asked Elsa to take her there. It was a really frustrating and unsatisfying moment, since Elsa seems to never get the comeuppance she deserves – but as we see later, there was a method to Dot’s madness in this situation.

Cut to Stanley, who’s futzing around with a high striker. After a feeble attempt, he tells passing strongman Dell “I feel like a damn fairy.” There’s a lot to unpack in that statement – both men are gay. Is Stanley demonstrating the kind of assertive denial of his sexuality that Dell himself has been shown to engage in frequently? Is he in fact sending a kind of coded message of interest Dell’s way?

Neither – Stanley is actually blackmailing Dell, who he saw earlier at the local gay bar (the same one where Dandy found his last murder victim, a prostitute who Dell happened to be in love with). Stanley threatens to expose Dell’s secret – a depressing reflection of LGBT acceptance in the ’50s – unless he kills one of the freak show performers. Stanley’s determination to sell a body to the American Morbidity Museum is unwavering.

So Dell gets to work. His first target is the 6-foot-8 Amazon Eve, who he attempts to suffocate with chloroform. This decision should have been accompanied by this on-screen:

As Eve tosses Dell out of her trailer, bloodied and beaten, she says, “who’s the strongman now?”

Eve reports the attack to Ethel and Jimmy, and Jimmy resolves to tell the police immediately. Ethel, who’s lived long enough to know her people can’t trust the cops or any other authority figure, says they have to deal with it themselves, and suggests they go to Dell’s trailer and kill him.

After Jimmy expresses incredulity, Ethel responds with a sorrowful monologue about “this disgusting, godforsaken world.” “The thing that will sink you every time,” she says, “is hope.” Kathy Bates’ performance this season has been incredible; time after time, her character shows a moving huumanity that isn’t common in AHS.

Cut to Elsa’s tent, where she’s asking the Tattler sisters what they want in exchange for their story that saved Elsa’s reputation in front of everyone. It turns out they did have a plan – Bette wants to be a comedian, caviar for breakfast every day, to dye her hair blonde, and 20 percent of the box office. Dot’s demands are simpler: 50 percent of box office. Elsa declares this negotiation, which has come about after the twins saved her entire livelihood, to be “outrageous behavior.” So the time between almost losing everything and being right back to her callous and arrogant nature was roughly 10 minutes.

Then Jimmy and Dell are in a bar, as Jimmy tries to talk “man to man” about the Amazon Eve incident. Dell claims he didn’t instigate it, which Jimmy accepts far too easily. Jimmy, who’s getting drunk quickly, tells a story about how the best months of his life were a Wisconsin winter where the gloves over his lobster hands looked no different from anyone else’s. Dell makes a show of saying how Jimmy shouldn’t wear gloves and has nothing to be ashamed of, but it’s far, far too late to have any sympathy for Dell as a character.

Especially once he reveals his intention to kill Jimmy with a brick as Jimmy vomits in an alley outside. The only thing that stops Dell is when Jimmy announces that he’s always known Dell is his father. Cue hugging and completely disingenuous father-son bonding time.

They stumble back into camp singing and drunk, and Elsa tells them to shut up. Dell declares this is the perfect time for a fatherly lesson: “The minute you let a woman boss you around is the minute you hand your balls to them.” Sexism: one more reason to hate Dell!

Suddenly we’re back to the most underdeveloped storyline of the season thus far: candy striper Penny’s surreptitious relationship with Paul the Illustrated Seal. Penny comes home at night, and her father is waiting for her. She confirms that she’s coming from visiting Paul, and that he’d have to kill her to stop her from being with him. Her dad replies, “you think I wouldn’t?” Wow.

Penny’s dad goes on a weird screed about how, as an electrician, he must have a sterling reputation for people to let them into their homes, but nevertheless he will do whatever it takes to make sure no one knows Penny was his daughter if she does anything to “shame” them. To reiterate, he is referring to his daughter possibly marrying a man with unusual arms. Yet he’s talking as if she plans on joining a Nazi cult or something like that. This is awfully over the top.

And it gets even weirder from there. He says he knows he can’t stop her, but invited his friend Morris over “to give her a proper sendoff.” It turns out that Penny’s father, upstanding citizen and electrician with a sterling reputation, happens to have a friend who is a body modification specialist with tattoos covering his face. Uh…okay? We are spared from witnessing how exactly Morris and her father subdue Penny, but somehow, she ends up with reptilian tattoos covering her entire face, as well as a bifurcated tongue. Again – a father did this to his own daughter.

What just happened is one of the most demented sequences to have appeared on a show that tends to be sort of into that kind of thing. At a macro level, I don’t object to the idea of a scene in which a previously typical individual is forcibly made into a “freak” – before the season began I figured that was a very possible source of horror in it. The big problem with this for me is that the perpetrator was a character, Penny’s father, that we hardly know at all. It’s a bizarrely out-of-nowhere event that makes me question how the storyline could progress from here.

Meanwhile, Bette has gotten her wish to dye her hair blonde, as well as some elegant makeup application. Despite the cosmetologist offering to do her as well, Dot will have none of it. This leads to Bette being uncharacteristically mean to her twin: saying they could have a “before and after” act in which Dot is the “plain jane” and Bette the “metamorphosis into the epitome of glamour.”

During this, Elsa slips Dot a note, trying to figure what she really wants in exchange for not divulging Elsa’s secret. In a note back, Dot tells her: to find the doctor who separated the Brodie brothers, in Chicago. So, Elsa tells Stanley, who she still believes to be a Hollywood talent agent, to help her with this. She wants Stanley to take the twins to Chicago so that they’ll be out of her life forever.

And this, my friends, is when I almost threw my remote threw the TV in frustration. Elsa is, unwittingly, giving Stanley exactly what he has wanted the entire time: an opportunity to take the twins away from the freak show, giving him a perfect opening to kill them and sell their body to the Morbidity Museum.

Yet for some unfathomable reason, he suggests to Elsa right then and there that they perform a “mercy killing” instead. This makes Elsa suspicious, and makes Stanley look like the worst criminal in history. To be clear, I’m not saying I want the twins to die – just that this made absolutely no sense to me.

Finally, we see that Dell has settled on a third and final choice of freak show performer to murder for Stanley: Ma Petite, the same one that Maggie came close to killing last week, but did not, because cuteness. There’ll be no anticlimax this time, as Dell crushes her in his arms as she hugs him in thanks for a gift. The episode ends with her formaldehyde-preserved body on display at the Morbidity Museum, and with her finally getting a real name (I guess they heard my complaint last week): Mahadevi Patel.

– The note-writing sequence between Dot and Elsa featured a very cool twist on the classic “voiceover from the character who wrote the note” template. Here, the note-writer appeared in a split-screen as a disembodied black-and-white head reading her words, which provided an unexpected and satisfying sense of menace to the sequence.
– Part of Penny’s forced transformation was a center strip of her hair being shaved off to continue the reptilian tattoo pattern. If the show acts like that hair removal is permanent, that’s going to be pretty dumb.
– Now that Maggie has been replaced as Stanley’s henchperson by Dell, I hope there is going to be something more to her character than badgering Jimmy about running away together.
– Bette compares her new blonde look to that of actress/comedian Eve Arden multiple times. I hope the fact that the head physician/secret Nazi war criminal in Asylum is named Arthur Arden is a coincidence. Can you tell that I am not at all a fan of Ryan Murphy’s recent declaration that all the seasons are connected?