AMC Ruins Their Own Show By Posting Walking Dead Spoilers 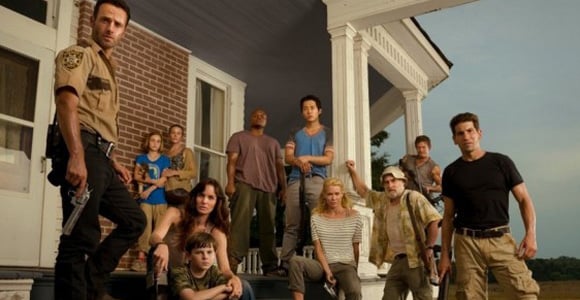 I do my best to avoid spoilers. In my particular career, you can imagine that’s a difficult task, but I do what I can. Fortunately I don’t usually have to worry about being spoiled for AMC’s The Walking Dead because I’ve read the original comics by Robert Kirkman. But many who haven’t read the series got a whopper of a shock this morning after AMC accidentally revealed a huge spoiler in an ad for their Season 2 DVD on their website. Needless to say, if you read on, there will be spoilers.

So what the hell happened? Someone made a big boo-boo is what happened. An advertisement was posted on AMC’s Walking Dead website to promote the forthcoming Season 2 blu-ray set (which looks like it comes complete with a zombie head with a screwdriver in its eye, which is…unique). The summary of the extras on the blu-ray read: “the making of the barn, an extended zombie gut scene, Shane’s last episode…”

Woops. That didn’t happen yet.

I think it’s safe to say, fans of the comic have been waiting for Shane to die. For a very long time. He’s lasted much longer than he did in the comic books and it’s been a source of frustration for readers of the series.

Here is a screengrab of the offending ad that did the damage. Obviously I can’t put this under the spoiler cover but well, just don’t read the text if you don’t want to know. 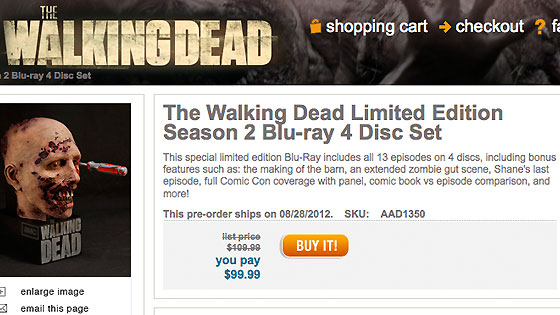 So yeah, that kinda sucks. Not to mention, why would that be in a DVD description at all? Don’t they realize some people will be watching the show for the first time that way? Not everyone has cable.

“The post on the AMC store was completely unauthorized,” AMC said in a statement. “The matter is currently under investigation.”

Though, this is from the website that has a still of Sophia as a walker on their front page.

Granted, fans of the AMC show may have already been inadvertently spoiled to this spoiler when news of actor Jon Bernthal being cast in Frank Darabont’s new L.A. Noir show hit the web, but this was a direct hit if ever I saw one.