Amazon Is Developing a Conan the Barbarian Series

What is best in life, Jeff Bezos? 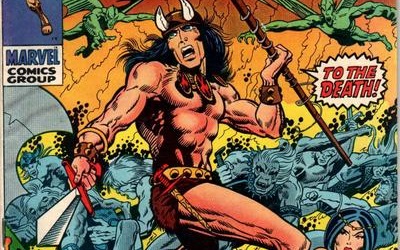 Deadline reports that Amazon is developing a Conan the Barbarian series from Ryan Condal (co-creator of Colony), Miguel Sapochnik (directed “Battle of the Bastards” on Game of Thrones), Warren Littlefield (executive producer on Fargo and The Handmaid’s Tale), Pathfinder Media, and Endeavor Content.

Condal created and wrote the series, which is based on Robert E. Howard’s short stories and books. According to Deadline’s write-up, Condal’s adaptation will “retell the classic character’s story via a return to his literary origins. Driven out of his tribal homelands, Conan wanders the mysterious and treacherous world of civilization where he searches for purpose in a place that rejects him as a mindless savage.

Amazon has definitely been leaning into fantasy properties as of late, with CEO Jeff Bezos reportedly delivering a mandate for Amazon’s “own Game of Thrones.” The company paid a reportedly astronomical fee for the rights to create a TV series which will “explore new storylines preceding J.R.R. Tolkien’s The Fellowship of the Ring.” A Conan series would seem to fit with this general push for high-profile fantasy action-drama, but I do wonder if they’ll end up crowding their slate. Fantasy shows are also generally more expensive to make than the quirkier, modern shows like Transparent that Amazon has won awards for, so I’ll be curious to see how they handle the budgets here.

Amazon’s series isn’t the only new Conan project in development. There’s a fast-tracked Red Sonja movie in the works from Joe Gatta (the 2011 Conan the Barbarian) and Avi Lerner (The Expendables, Olympus Has Fallen) from Millennium Media, as well as Mark Canton (300) and Courtney Solomon (Cake) from Cinelou. “With the success of Wonder Woman,” said Lerner, “the audience has spoken. They want female heroes.”

Given that there’s a separate Red Sonja film in production, I’m not sure if she could appear in this Conan TV series. (Film and TV rights are, as ever, a confusing thing.) But what would you like to see in Amazon’s Conan series? Something closer to Howard’s source material? Or something more like the 1982 Arnold Schwarzenegger film?