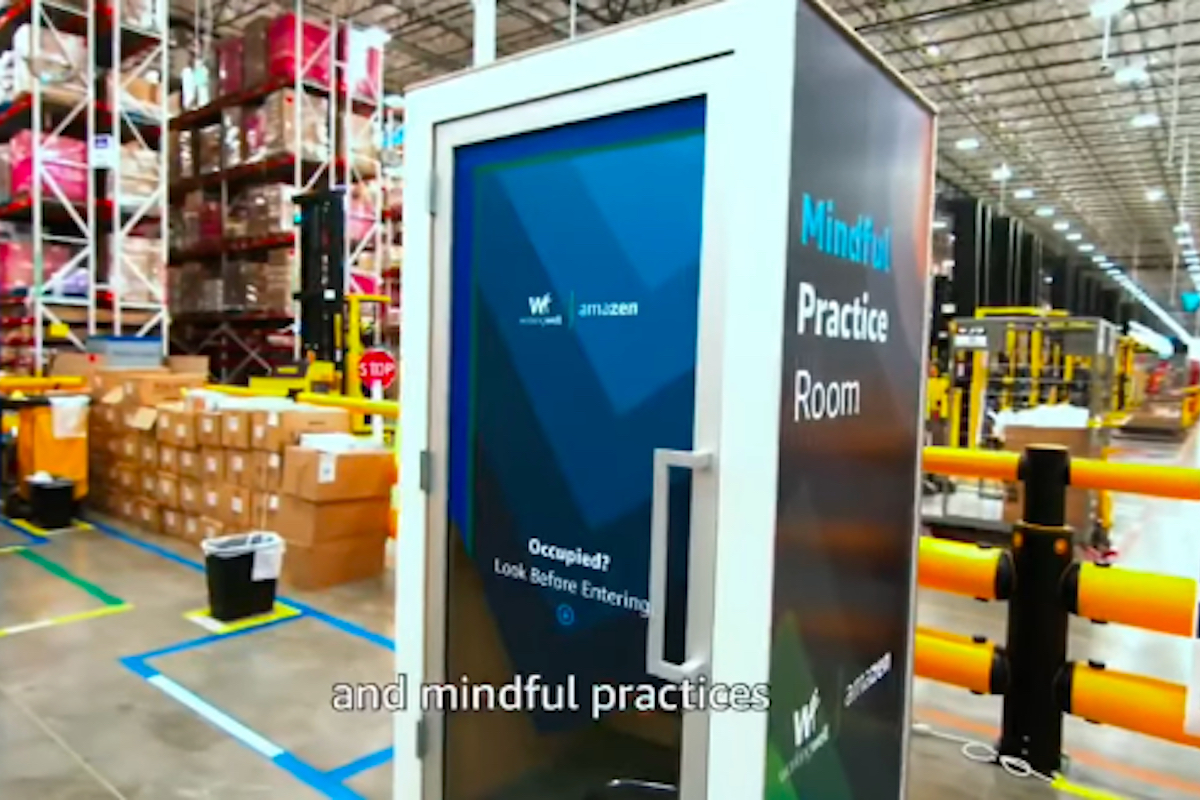 Amazon appears to be taking steps to try to mitigate its reputation as a grueling, dangerous place to work. No, they’re not letting their workers unionize and no, they don’t appear to be doing away with or even lessening their automated productivity quotas that are so strict they’ve led to injuries and forced workers to forego bathroom breaks.

They are, however, giving those workers tiny booths to sit in when they need a moment of “mindfulness.”

“Based on a video released on an Amazon Twitter account, plants sit on a shelf and a fan runs to cool down the employee,” Vice reports. “The skylight on top is tinted blue. Pamphlets and signs adorn the walls. A computer waits for the employee to load up a guided meditation video.”

On a practical level, Amazon’s “Zen Booths” (also called “Mindful Practice Rooms” or “AmaZen” stations) don’t make much sense. When are workers supposed to find these moments for themselves when many of them literally still don’t have time to use the bathroom? The booths do look like Porta Pottys but I’m guessing Amazon is discouraging using them as such.

I am amazed that among the teams of people it must have taken to implement these booths, no one ever realized the glaring corporate dystopia optics on display here.

The booths are part of Amazon’s new WorkingWell program, which claims to provide employees with “physical and mental activities, wellness exercises, and healthy eating support” designed to “help them recharge and reenergize, and ultimately reduce the risk of injury.”

Reducing injuries should be at the top of Amazon’s priority list. Their automated warehouses have an injury rate of five times that of the industry standard and just recently, the company was fined (a whopping $7,000 but it’s something, I guess) for overworking employees to the point of injury without proper recovery time.

The Seattle Times writes that “Regulators found a ‘direct connection’ between the incidence of injuries at the warehouse and Amazon’s expectation that warehouse employees ‘maintain a very high pace of work’ or else face discipline.”

Amazon’s answer: Here’s a tiny box to sit in while you watch company videos about mindfulness.

The booth might be Amazon’s worst idea for how to improve employees’ mental and physical health but it had some competition. The company has also introduced a “self-paced app that offers computerized Cognitive Behavior Therapy, mindfulness resources, and personalized support for a broad range of mental health and wellness issues.” Amazon just drew a huge amount of criticism for crossing legal and ethical boundaries in monitoring unionization efforts and intimidating employees. I don’t know they think why employees would trust them not to spy on their therapy app.

Similarly, Amazon is also offering free counseling sessions to employees and their families, which is great! Except those sessions are limited to three “per person, per topic,” which seems like a weirdly specific limit, and one that would be hard to enforce. What counts as a “topic” and who is responsible for enforcing the limit on over-discussing a certain subject?

Amazon loves to call itself “Earth’s Safest Place to Work” but no amount of “zen” booths and apps will make up for a legitimately dangerous work environment.