Amanda: So, before the storyline of Street Fighter II, Bison had an army of 16-year-old girls that he kidnapped from all over the world.

Amanda: Yeah, it’s gross. They were called “The Psycho Dolls”, which is actually what I want to name a band one day.

Becky: That’s a great name for a cover band. Or a roller derby team.

Amanda: Cammy was the leader of the group. She was known as “Killer Bee.” BUT! Cammy was not a girl who was kidnapped and brainwashed like the other Dolls. She was actually created from the DNA of Bison to be his assassin and a future body to house his spirit.

Becky: Wow. This just got a lot crazier than I was expecting.

Amanda: Calm down. The American ending is not officially canon. It was created to appeal to American audiences.

Becky: Well, that’s a relief. I read in the Japanese ending, all it says is that she used to work for him.

Amanda: Apparently, someone in Capcom decided that the star-crossed lovers thing made more sense to American audiences.

Becky: Yes, because having her work for him doesn’t make any damn sense.

Amanda: Amnesia! She had amnesia and forgot she worked for him. Amnesia makes everything make sense!

Becky: Oh, right, I forgot the amnesia. How appropriate.

Amanda: So, anyway, in the Alpha storyline Cammy becomes self-aware and Bison decides to destroy her. She leads the other Dolls in a mutiny against Bison, and then uses the Shadaloo technology to free them from their mind control. Then she gets knocked out? Or something? A thing happens and she gets knocked out. And then Shadaloo explodes.

Amanda: It’s all good. Vega (the bishi Spanish guy with the claw) takes her to the British Embassy where she wakes up (sans memory, of course). And THAT’S how Cammy became a nineteen-year-old secret commando. See? Now it makes perfect sense.

Becky: Yes, I see no problems there whatsoever.

Becky: That’s kind of what I loved about the game, actually. It didn’t try to pretend to be anything more than what it was: an excuse to run around and beat people up. And you just have to roll with the punches, pun only slightly intended.

Amanda: Yeah! If you don’t think about it too hard, it’s a pretty good time.

Becky: Like when you get to beat up a car in the bonus level. Sure! Why not? Let’s beat up cars!

Amanda: To be fair, that car was asking for it. That car was so smug.

Becky: Seriously. It needed somebody to take it down a peg.

Amanda: I wonder whose car that was? Bison’s?

Amanda: He’s an evil warlord, so of course his car needed to be destroyed. Petty vandalism for great justice!

Becky: I can’t tell you what a beautiful moment it was when I finally figured out how to get around his stupid spinning flying-right-at-you attack thing.
I’m sure it has a name.

Amanda: Something with “Psycho” in it. “Psycho Spinning Flying-Right-At-You Attack Thing.”

Becky: That sounds about right.

Amanda: Bison was rather proud of his unbalanced mental state. He named everything he did or owned “Psycho Something”.

Becky: Like how Dhalsim yells “YOGA!” all the time? “YOGA FLAME!”

Amanda: Because yoga is a martial art, didn’t you know?

Becky: I didn’t before I played the game. I’m much more motivated to do sun salutations now.

Amanda: I just want to know how many Vinyasa Flow classes I have to take before I can breathe fire. “Yoga Flame” is also the name of another band I will have someday.

Amanda: I am going to have a lot of bands.

Becky: Well, you can never have too many.

Amanda: Anyway, for the record, India does have martial arts. Yoga just is not one of them. But who am I to argue with a character that wears skulls as a necklace?

Becky: Non sequitur, but working my way up to Bison made me think about game design.

Becky: The way Street Fighter works is that it gives you a challenge with a very high chance of failure, without explaining how you’re supposed to get through it. When you inevitably fail, you have to pop in another quarter.
But you also have a pretty good idea of what you did wrong. You don’t know how to fix it, but you know what *not* to do. So you have to try again.

Becky: Getting good at this game would’ve taken a hell of a lot of quarters. Which is exactly why arcades did so well. And I just saw it as an interesting parallel with some of the conversations we have nowadays concerning casual games. I’m sure there are lots of people out there who have made this connection, but there’s this whole debate as to whether things like Farmville or iPad games that make you pay for when your pets die or whatever are “ethical” games. And it’s often talked about as if this is a new thing we’re seeing in gaming, the carrot-on-a-stick approach to getting people to play. But that’s exactly what arcade machines were doing. Those quarters, in a way, were the microtransactions of the 80s. Though I do think arcade machines have a hell of a lot more charm than Farmville.

Amanda: Oh, of course. Believe me, there is nothing like entering an arcade and just getting hit with that cacophonous symphony of “bleeps” and “bloops”.

Becky: I always wanted to spend more time in arcades as a kid. I thought they were so cool. I always felt really shy going in, though.

Amanda: I feel your pain. I remember back then, it felt harder to be a girl gamer.

Becky: We just weren’t as visible. Part of the reason I always chose Chun-Li, aside from wanting to be the girl, was because I was already engaged in a “boy” activity. I didn’t want to be seen playing as a boy, too.

Amanda: We also did not have the means to build a supportive community, which is what the internet affords us today.

Becky: I love the internet so much.

Amanda: It would be great if there was still a viable arcade scene these days. But with the convenience of at home consoles, I just don’t know if that’s possible.

Amanda: Last year at New York ComicCon I went to a panel about the closing of Chinatown Fair, one of the last proper arcades in New York City. 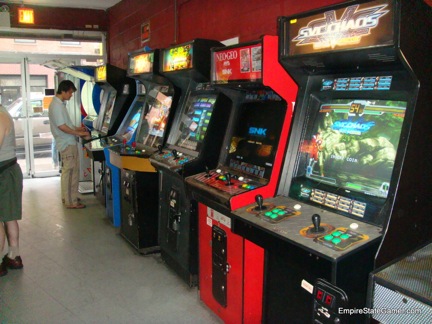 Amanda: It was sad. And enlightening. But mostly sad. What I learned was that the problem with the arcade industry was actually two-fold. US arcade cabinet manufacturers made cabinets intentionally faulty, so that eventually they would break and you would have to order new parts.

Amanda: So number one: you have these arcade cabinets that keep breaking. Number two: you have the option of playing games at home and not spending money on games that break. What are you going to choose?

Amanda: Chinatown Fair actually managed to survive for a long time because one of their employees would fix the cabinets whenever they broke. Eventually, though, rents being what they are and all they had to close.

Becky: Okay, I am sad, and I never even went there.

Amanda: Chinatown Fair did eventually reopen, but it became what the new owner describes as “Dave and Buster’s meets Chuck E. Cheese’s.”

Amanda: They have three games from the original arcade. The rest are redemption games. And Fruit Ninja.

Amanda: I never thought something like Fruit Ninja would fill me with such unjustifiable rage, but there ya go. How did we get here? I’m sad and angry now!

Becky: Me too! I’m sitting here lamenting the fact that gamers don’t have a central hub like that anymore. I mean, don’t get me wrong, I think online gaming can be a great place for hanging out and making new friends. But it’s not the same. We don’t really have anything comparable anymore. Even LAN parties aren’t the same. Everybody’s got their own screen and headset. And it’s really hard to find console games with couch co-op.
Maybe not really hard, but it’s much rarer than it used to be.

Amanda: The power of the internet: used once again for good.

Becky: Going back to Street Fighter, I remember being with my little brother, in the trading card store, mashing buttons together like the world was coming to an end. I love so, so much about where gaming is now, but I do miss that.

Amanda: Let’s not think about Street Fighter with sadness and regret. Let’s remember it with fondness and joy. After all, we just started this discussion series. We still have a month of Street Fighter to discuss.

Becky: Agreed. I mean, the fact that we’re still talking about it a quarter century after the fact is pretty freaking awesome.

Amanda: Times change, life goes on, but Street Fighter remains Street Fighter. And when you think about that, it’s a beautiful thing.

Becky: You know, even though I’m only properly exploring the series now, I already have a real affinity for it. I think it’s going to be a good month.

Amanda: Oh! One more thing about Cammy (sorry to drag us all the way back there)…

Amanda: If you have a chance, read the Street Fighter Gaiden mangas by Mami Itou. She writes some really enjoyable Cammy stories in which the character is treated like a human being. She even gets to wear pants!

Becky: On that note, I was amazed to see that Kylie Minogue never lost her pants in the movie. She got to wear camos the whole time.

Amanda: I kind of love Kylie Minogue as Cammy. You know she trained like a beast for that role?

Amanda: Yeah, the whole cast did their own fighting.

Becky: Whoa, so she totally did that flip thing where she grabbed the dude’s head with her legs and threw him to the ground. Okay, new respect for Kylie Minogue.

Amanda: And with newfound respect for Kylie Minogue, we end this week’s discussion. Next week, we’ll talk about the Alpha series.

Becky: My thumbs are prepared.

Becky Chambers is a freelance writer and a full-time geek. She blogs over at Other Scribbles and she can always be found on Twitter.

Amanda LaPergola is also a freelance writer and a non-union actor. Mostly, though, she serves a lot of food. She is also on the Twitter.