Right-Wingers Tried to Take Down Author Alyssa Wong With a Fake Tweet. Why? 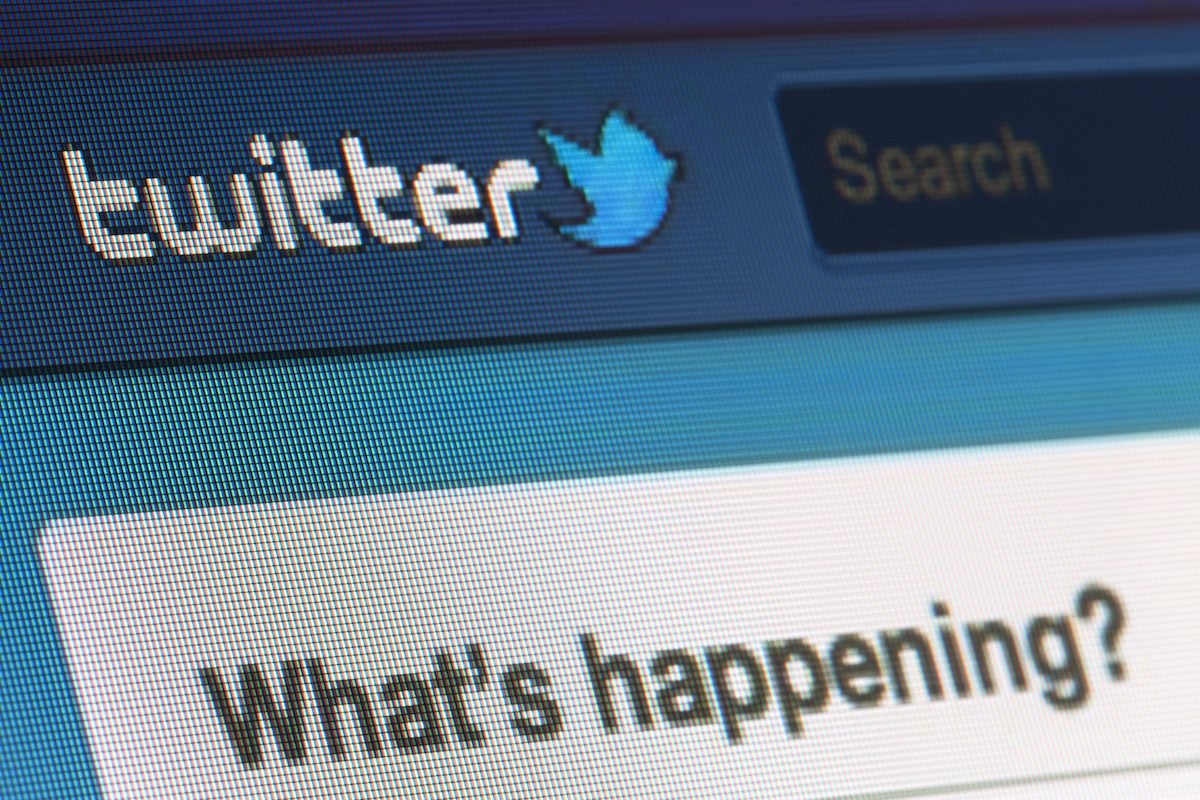 Alyssa Wong remains one of the most prolific fantasy and science-fiction writers currently working. Wong started writing back in 2014 with her short story “The Fisher Queen,” which was a finalist for the Nebula Award for Short Story, the Shirley Jackson Award, and the World Fantasy Award for Best Short Story. From there, she’s published over a dozen more short stories, poetry, and several essays, but in 2018, she entered the public consciousness when Blizzard Entertainment hired her as a writer for their popular game Overwatch.

Recently, Greg Park, a writer at Marvel, announced that he would collaborate with Wong to write his ongoing Aero series. Almost a week following this announcement, a fake tweet surfaced, made to look like an old one of Wong’s. It read, “Fuck Stan Lee. So What if he’s dead, he’s still a racist thief and an appropriator of culture just like that jerk Cebulski. If I ever work at Marvel I’ll tear down as much of Stan Lee’s so called legacy as possible.” 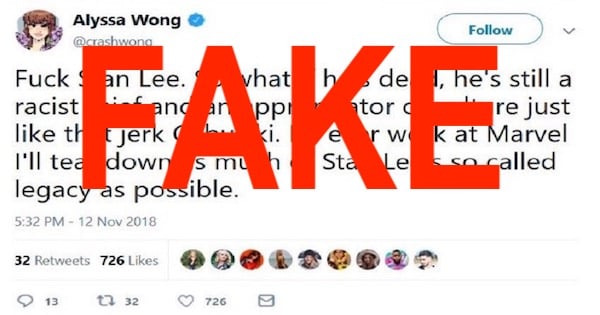 Beyond the fact that the text is a poor imitation of Twitter’s actual formatting, no record of Wong ever posting this tweet surfaced. The only “evidence” that this tweet even existed was a “response” to a deleted tweet that, apparently, was dated a full year before Wong’s “original” was ever posted.

So yes, this obviously was a fake tweet. Yet, despite this, several right-wing journalists ran with the story as though it were confirmed. Without any proof backing up their claims beyond a questionable screenshot, several right-wing media news sources, most notably Bounding into Comics and The Quartering, ran the story, pushing it to their fans without any context. When sites like Bleeding Cool then established that the tweet was faked, Bounding into Comics and The Quartering had to make retractions, which, to their credit, they did.

However, this all begged the question: Why was there a fake tweet targeting Wong in the first place, and why were they so eager to run with it? Both sites frame themselves as credible sources of news. Why would credible news sites run these obviously untrue stories?

Not the First Time

This is hardly the first time that Wong has found herself in the crosshairs of the right wing.

Between the years of 2013 and 2017, a campaign of right-wing writers, the Sad Puppies, campaigned for several books in order to influence the Hugo Awards, considered by many to be one of the top awards in the science-fiction and fantasy community. The Sad Puppies believed that science fiction and fantasy had become too political in nature, which led to “fun adventure stories” losing prominence in the genre.

During the 2015 Hugo Awards, the Sad Puppies successfully pushed out several competing authors and titles to edge in their nomination darlings. An article by Andrew Liptak on io9 indicated that, if not for the Sad Puppies, Alyssa Wong would have been a finalist for the John W. Campbell Award for Best New Writer, but was instead edged out. She would become a finalist for the same award in the following year’s Hugos.

The point was that the Sad Puppies campaigned against her, robbing her of the Award’s credit. The question remains, though, why? Why was Wong pushed out?

The most likely reason is Wong’s Chinese and Filipino descent and the influence they have on her writing. Wong often draws from her cultural experiences when creating her fiction. She’s a huge proponent of representation and is highly critical of writers who appropriate other cultures for their stories.

As such, Wong had several issues with Marvel’s Editor-in-Chief, C.B. Cebulski. Cebulski, very famously, wrote under the pen-name of Akira Yoshida. Many people took strong issue with Cebulski appropriating the identity of a Japanese writer for his own personal benefit; Wong, in particular, was critical of him. She went on a bit of a rant, criticizing Cebulski in a now-deleted thread, archived here:

“A couple thoughts about C.B. Cebulski/Akira Yoshida before I step away from social media for a while: People are complicated. Fucking up doesn’t cancel out the good work someone has done. But good work/Well He’s A Really Good Guy also doesn’t erase the real harm someone’s done…There’s a difference between Diaspora Asian/Mainland Asian discourse, & when we talk about anti-Asian racism & the pressure to assimilate, as diaspora, & the harm of cultural appropriation, that distinction becomes [very] important. Listen to your Asian diaspora friends.”

When Greg Park announced his collaboration with Wong, Bounding into Comics made sure to remind its readers of this very real tweet thread.

The Right Wing and the Status Quo

This criticism of cultural appropriation, to anyone familiar with even basic social discourse, is pretty straightforward and reasonable. Wong didn’t say anything too drastic. However, to the right-wing side of fandom, this sparked outrage.

How dare Wong, a newcomer, come in and boss everyone around on how to present Asian cultures?

To quote Bounding Into Comics’ article, written by John F. Trent, in response to Wong’s hiring, “It’s quite a shock that Marvel Comics would hire someone who outright attacked their Editor-in-Chief by calling him a racist. It’s even more shocking when Cebulski stated that ‘breaking into, and staying in, comics, in any capacity, is just as much about attitude as it is about ability.’ I guess we know now the kind of attitude Marvel Comics is looking for in their comic book creators.”

To them, the problem isn’t Cebulski’s behavior or the greater problem with how writers appropriate Asian iconography in careless, thoughtless ways. The problem is that Wong spoke out about it, thus attacking the established status quo they had grown to love.

This, in a nutshell, is what the right-wing hates about writers like Wong. Writers of diverse backgrounds and cultures disrupt the status quo by bringing new ideas to narratives.

Aero is a Shanghai superhero. Wong is being hired to write this character because of her expertise with representing Asian cultures. To Cebulski’s credit, Wong being hired implies that he’s learned something after his public humiliation over his Akira Yoshida identity.

But to the right-wing side of fandom, this is dangerous.

But let’s address the elephant in the room: Bounding Into Comics just does this. A lot.

All of this should come as no surprise if you have any passing familiarity with Bounding into Comics’ origin. It started as a hub of news for “ComicsGate” before becoming a general reactionary right-wing media news site. Its core agenda is to turn people against the increasing number of diverse talents in the field of media.

Bounding into Comics regularly runs news stories designed to promote its right-wing agenda in an overt, unsubtle manner. They regularly target and direct hate toward diverse voices.

Have any doubts about this? Look at how many articles the site contains about Brie Larson, the star of Captain Marvel. There are seven pages of articles, each page with 10 articles apiece (seven on the last page). Headlines read “Brie Larson Doubles Down – Wants Fewer White Men on Captain Marvel Press Tour” or “Brie Larson Backlash: Latest Captain Marvel Box Office Projection WAY DOWN!”

The site’s focus is on how the status quo of media is changing, and how this change is bad—a continual right-wing talking point that they try to pass off as apolitical fact. Wong entering Marvel represents everything they fear: an intelligent writer who promotes the radical political aim to … accurately represent diverse populations.

So, too long, didn’t read? The answer to this article’s title is racism, plain and simple, but it’s racism covered in a shiny coat of “concern.”

If you have read this article and are curious about reading Wong’s work, I highly recommend you check out “The Fisher Queen,” “Hungry Daughters of Starving Mothers,” or “You’ll Surely Drown Here If You Stay.”

Anthony Gramuglia has written for CBR, ScreenRant, Anime Feminist, and Vocal. He is an MFA Graduate with an enthusiastic love for writing and all sorts of fandom stuff. You can follow him on Twitter at Check out @AGramuglia.