Alyssa Milano and Ted Cruz Are Having a Gun Control Debate? | The Mary Sue

What on Earth Are Alyssa Milano & Ted Cruz Hoping to Get Out of a Gun Control Debate? 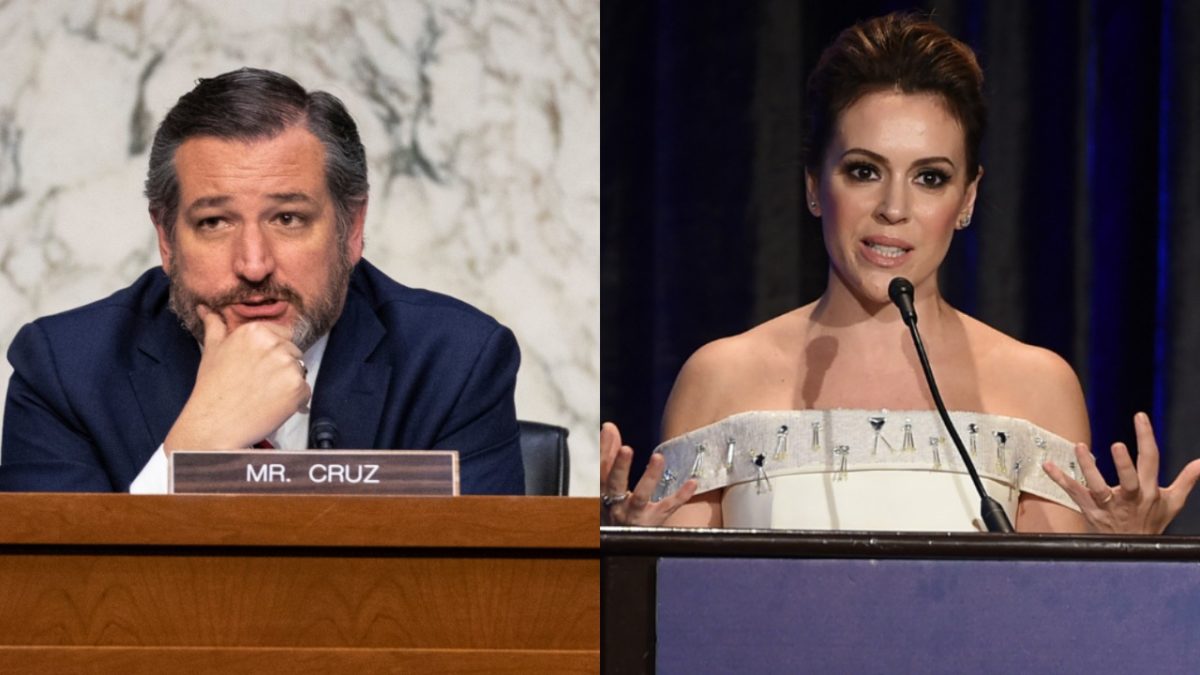 Ted Cruz and Alyssa Milano have agreed to meet for a conversation on gun regulation, which is not a sentence I expected to ever type.

The two had a heated back-and-forth on Twitter this week, after Milano responded to a tweet from Texas Rep. Matt Schaefer in which he decried “so-called gun-control solutions” as being able to protect people. Later in the same thread he seemed to say that the only thing that can protect people is prayer so that doesn’t really seem like a person worth engaging with, but to each their own.

Can someone cite which passage of the Bible God states it is a god-given right to own a gun? This guy is unbelievable and is clearly owned by the gun lobby. #NoRA https://t.co/PxVV1RoV2Z

Cruz jumped in to tone police her in a very lengthy thread.

An excellent Q, worth considering carefully w/o the snark of Twitter. It is of course not the right to a modern-day firearm that is God-give but rather the right to Life & the right to Liberty. Essential to that right to life is the right to DEFEND your life & your family. 1/x https://t.co/8pjstMGrGB

She responded by saying she’d “love to come in and meet with [him] on the gun issue and many other issues that include life, liberty and the pursuit of happiness.” In response to Cruz citing a quote from Exodus about self-defense, she also said she’d like to talk about 1 Peter 4:8: “Above all, love each other deeply, because love covers over a multitude of sins.”

I’d be happy to sit down & visit next week about uniting to stop gun violence & about the Constitution. If we can have a civil & positive conversation—in the spirit of 1 Peter 4:8 as you suggest—despite our political differences, that might help resolve the discord in our Nation. https://t.co/YfkB97wAA0

Over the course of a few more tweets, they seem to have set a date for their meeting, which will take place in Washington DC on Tuesday of next week. Milano suggested live streaming it but I sure hope that doesn’t happen. Because if they want to talk, fine–good for them! But it’s hard to imagine this actually helping to “resolve the discord in our Nation.”

It sounds like they’re approaching this as a conversation, not a debate, which is good because if this were a debate, it would be hard to understand how Milano thinks this is a good idea. Ted Cruz may not be a person anyone would describe as “intelligent”–for example:

imagine youre so dumb as a us senator you think climate change cant affect you if you’re landlocked https://t.co/qYsYoDzK7F

But not knowing that climate change affects more than beachfront properties is different from being a trained debater, which Cruz is.

If someone is going to debate a Harvard trained national debate champion lawyer turned politician, I‘d prefer it be someone trained in such things.
That doesn’t mean I think only white dudes from Ivies can debate.

Debate and oral argument is a skill you have to learn. 🤷🏾‍♀️

But maybe this really won’t be a debate. Maybe it will just be an open and honest dialogue about the concerns of two opposing views in the national conversation around gun regulations. (No part of me believes that’s what will happen, but let’s just say what if!) If that’s the case, then this really affects absolutely no one but the two people involved. There are a lot of headlines and Twitter conversations framing this as some sort of liberal vs conservative showdown but honestly, are either of these the fighters their side would have chosen?

Ted Cruz is notoriously loathed by his own party. Alyssa Milano is very politically active and has started some interesting and important conversations online but she’s also said some completely bananas things in the same spirit and is in no way a representative of anyone but herself.

If this doesn’t end with Ted Cruz changing Milano’s mind on guns (which he won’t), it will just highlight the feeling many gun control activists have that conservatives can’t be reasoned with. And if she doesn’t change his mind (which she won’t), conservatives are going to run with headlines about her getting owned by the worst the Republican Party has to offer. It’s lose/lose.

In the end, hopefully this will just end up being the story of two people who sat in a room together and had a miserable time in private and absolutely nothing else.