“For me, it was trusting the writers and knowing that we would make the most out of what we had." 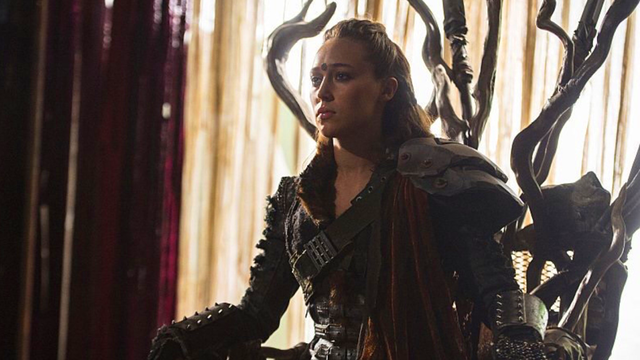 Much of the fandom of The 100 are still reeling after a recent episode of the show killed off a much-beloved character, a plot decision that left many fans feeling heartbroken and even betrayed by showrunner Jason Rothenberg (among others).

After a touching scene in which characters Lexa and Clarke finally consummated their relationship, Lexa was killed by a stray bullet–though it was revealed that her murderer had intended to kill Clarke instead. Some cited the tired “dead lesbian” trope, others were frustrated by the sight of another queer character being killed off a TV show just after finding happiness. The initial lack of response from Rothenberg was juxtaposed against the responsiveness of Javier Grillo-Marxuach, who wrote the episode and who took time to answer fans personally after the episode aired.

Now, the actress who played Lexa is speaking out about the episode, the fan response and her time spent on The 100. In an interview prior to the Fear the Walking Dead panel at PaleyFest, Alycia Debnam-Carey said she was “surprised by the intensity and the fury” of the fan reaction to Lexa’s death:

“I don’t think anyone on the show expected such social outcry. I think any attention we can draw to a movement like that is an amazing thing, and is a great thing to pursue and keep working towards.”

While The 100 has been on hiatus for the moment, Debnam-Carey doesn’t believe the decision to kill Lexa off was a malicious one or not thought out thoroughly, and doesn’t want fans to boycott the show now that Lexa isn’t around:

“It is important to note that the decisions only ever come from love and trust within the show. I don’t think it was ever intended to aggravate anyone in a social situation. There’s so much love for that character, like from me, from the writers and from Jason [Rothenberg]. I hate to hear people wanting to not watch the show anymore for a certain reason like that. I do understand, of course, it’s a social issue. If people are feeling that way, it’s really important to recognize.”

As for whether or not Lexa could return someday, Debnam-Carey did emphasize the definitiveness of Lexa’s departure–and didn’t say one way or another if a Lexa comeback is on the table, but added that she prefers characters are not sent off “without a really defining moment or a clear-cut reason”, saying that anything else feels “lazy”. Overall, however, Debnam-Carey was very touched by the fandom’s response to Lexa’s death:

“I think it was so emotionally overwhelming. The reaction that sparked within people, where I’m reading texts and tweets from people saying, ‘I’m crying and in tears,’ to be able to say you’re a part of that is an amazing thing. I hate thinking people thought it was insensitive, because it was such a beautiful episode for us to shoot as well.”